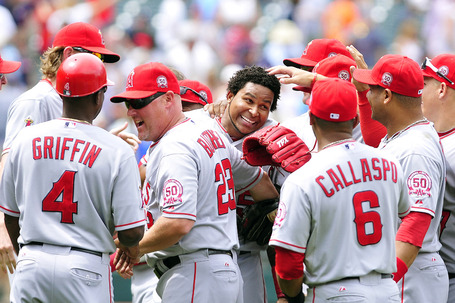 ©GettyImages - click that pic to enlarge it and be ready to say awwwww...

Ervin Santana threw a no-hitter against the Cleveland Indians in Ohio this morning (still AM Pacific time at its completion). The Angels pitcher recorded his first career victory over the Tribe, the team that hit for the cycle against him in his very first career appearance on this same field. Call Joseph Campbell, the hero's triumph is always an echo. Catcher Bobby Wilson perfectly framed Magic's biting slider for all 106 pitches, 76 of which were strikes.

Props to Angels telecast announcers Victor Rojas and Mark Gubicza for not mentioning the no-hitter throughout the game.

This was the 9th no-hitter in club history. Nolan Ryan had four no-hitters as an Angel. Bo Belinsky had the first in club history and the first tossed at Dodger Stadium, sorry Sandy. Clyde Wright had a no-hitter in between Bo and the Express and Mike Witt had a perfect game against the Rangers in Arlington on the final day of the 1984 season. Witt in relief also combined for a no hitter with Mark Langston. Witt is the only pitcher in baseball history to throw a perfect game and be part of a combined no-hitter. In 2008 Angels righties Jered Weaver and Jose Arredondo combined for 8 innings of no-hit ball against the Dodgers in Chavez Ravine but lost the game 1-0 and their place in the history books with no chance to pitch the 9th inning and record the requisite CG for a no-no to count.

The Indians scored in the first inning without the benefit of a hit. Ezequiel Carrera led the game off by geting on base courtesy of an Erick Aybar error. EC stole 2B, advanced to 3B on a grounder and scored on a wild pitch. With the game tied in the 6th Torii Hunter returned the favor and scored from 3B on a passed ball to take the lead for good.

Perhaps now, in his seventh season with the Angels, the team store at Angel Stadium will finally carry Santana TeeShirts in a variety of sizes. We can hope, can't we?