Google Hates The Angels, Cron Off To A Good Start. Halolinks

Share All sharing options for: Google Hates The Angels, Cron Off To A Good Start.  Halolinks

Which Team is the Most Popular in Baseball? - Beyond the Box Score
But on the other side of the coin, problems arose with a team like "Los Angeles Angels of Anaheim,' as it's obviously the longest team name in baseball. On a side note, and a totally irrelevant one, I wondered if the Angels realize, and if so, care about their team name for SEO (Search Engine Optimization) purposes. It's probably the hardest name to type, and it takes the longest to do so as well. In any case, search results are search results, and this is the data that I put in my back pocket and left Google with.

Here's an interesting post using Google to determine the most searched, and hence, most popular team.  Some results:

Someday I’m going to retire to a nice little town in the Pioneer League, and I’m going to buy season tickets, because two out of every three games in the Pioneer League are crazybananas. C.J. Cron, who made his pro debut on Friday, went 4 for 6 in Monday’s game, including a home run. He has hit in all four games he has played, and is batting .438/.571/.813 with two home runs.

Outfield defense.  Remember everyone talking about that this past off-season?  Here's one of the reasons why: 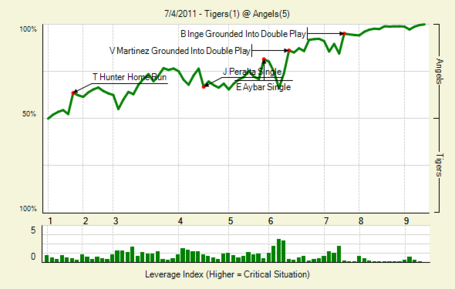 Really cool post by Jeff Sullivan with .gif's of each closer's celebration.  Really cool. Seriously.  Check it out.

Twitter / @BobKlap:
#Yankees says #Mets have made K-Rod available - "door is wide open" - but are only marginally interested. Prefer to wait on R. Soriano.

Steve Melewski: Guerrero's days as Orioles' cleanup hitter could be numbered - masn.com
Last year, Vlad hit .320 with runners in scoring position and averaged an RBI every 6.8 at bats. Now those figures are .219 and 10.4. After the four homers he hit in April, he now has just two over his past 54 games and 195 at-bats.

The sun must set on everything.

July 5 - BR Bullpen
Events, births and deaths that occurred on July 5.
1934 - Lou Gehrig hits an inside-the-park grand slam, as the Yankees beat the Senators, 8 - 3. It is his 4th of the season and 17th overall, passing Babe Ruth's career total. Gehrig will eventually set a career record of 23 grand slams. Gehrig now has 321 career home runs to Ruth's 698.
1972 - Nolan Ryan (10-5) strikes out eight in topping the Brewers, 2 - 1. Winston Llenas, batting for Ryan in the 9th, singles off starter Earl Stephenson for the winning run.
1987 - A's first baseman Mark McGwire becomes the first rookie to hit 30 homers before the All-Star Game as Oakland defeats the Red Sox, 6 - 2.
1994: California C Chris Turner leads the Angels to a 10 - 3 win over Boston. Entering the game batting only .138, Turner strokes five hits, including a pair of doubles, and gets two RBIs. He also becomes the first Angel C ever to steal home with a 2nd-inning theft.  What is it with the Angels and their light-hitting catchers??
1996 - After the California Angels score three runs in the top of the 1st inning, the Oakland Athletics respond with 13 of their own in the bottom half to mark the highest-scoring 1st inning by two teams in major league history. The 13 runs is one short of the record. DH Matt Stairs ties a major league mark with six RBIs in the frame. The Athletics go on to post a 16 - 8 victory.
2002 -  Baseball legend Ted Williams, considered by many the greatest hitter in the history of the game, dies of cardiac arrest at the age of 83.
2004 - In an effort to honor local military personnel, the Twins give away a G.I. Joe action figure to the first 5,000 children attending a game against the Royals. The team, in an effort to appease protesting peace groups, who see the promotion as glorifying war, asks Hasbro, the toy's maker, to remove the customary gun from G.I. Joe's side, but the hand grenades remain visible.
2009 - Vladimir Guerrero plays his first game of the year in the outfield and belts his second homer in two days as the Angels defeat the Orioles, 9 - 6. Vlad has been in a power drought to start the year, but now has 4 homers. Los Angeles stays tied atop the AL West as its main rival, Texas, completes a sweep of Tampa Bay with a 5 - 2 win at home.
Happy b-day:
1950 - Gary Matthews, outfielder; All-Star No wonder he sucked, he was like 50-something years old!  Wait, what?