Bad Angel Debuts, No Day Off For Playoff Halos. Halolinks.

Share All sharing options for: Bad Angel Debuts, No Day Off For Playoff Halos.  Halolinks.

Ten terrible debuts by great Angels stars - The Orange County Register
Three hundred and thirty-six players have made their Major League debuts with the Angels. By a modern stat called win-probability added, which measures how a player's actions changed his team's chances of winning, Garrett Richards' outing was the 18th worst of them.

This is one of those click-through photo posts the OC Register is so fond of, but it's done by Sam Miller (so, I'll give him a pass). Sam's done his research, and finds some interesting (and weakass) Angel debuts.

MLB gets postseason schedule right - CBSSports.com
One example that still sticks out in my head is the Yankees-Angels 2009 ALCS, when there was an off-day with no travel. Game 4 was played in Los Angeles, the following day there was no game, and then Game 5 was played in Los Angeles. Angels manager Mike Scioscia mentioned how stupid it was during the winter meetings that offseason.

This is encouraging, MLB has finally done something right after having a committee look into a problem. Now if they could only get their crap together and do something about instant replay.

Angels slammed by Yankees after error- The Orange County Register
Angels second baseman Maicer Izturis' error with two outs in the seventh inning of a tie game opened the door for Robinson Cano's grand slam, sending the New York Yankees to a 6-5 victory over the Angels on Thursday afternoon at Yankee Stadium. 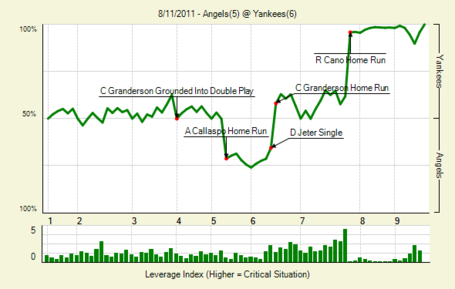 Angels mailbag: What's now, what's next? - ESPN Los Angeles
Mike Becannon (Huntington Beach, Calif.): What is that the Angels want Hank Conger to work on? Blocking balls in the dirt? Throwing out base runners? Game calling? When the Angels need offense how can the Angels continue to justify playing Mathis? And if he’s such a great catcher, why do Conger and Wilson have a lower CERA when catching Ervin Santana and Tyler Chatwood? Also, why is it that Mathis ranks so low on defensive stats, if he’s so good? How come the best-hitting catcher the Angels have is in triple A and not starting everyday for them so he can keep his swing?

Hey Mark Saxon, why don't you let me take this one...Hi Mike, thanks for the question! The reason Hank Conger is in Salt Lake City and Jeff Mathis is in Anaheim is...ummm...let's see...CERA!...no wait, Jeff has soft hands. Yeah, that's it! Mathis has the softest hands.

C.J. Wilson slams Oakland stadium, fans, team - CBSSports.com
"I hate pitching there," Wilson told MLB.com. "The mound [stinks]. The fans [stink]. There are no fans there. It's too bad, because the fans that are there are really adamant and stoked on the team. They play drums and they wave flags, and it's cool. But some games you go there and there are, like, 6,000 people there. It's kind of sad, because that's a Major League team, and there are guys out there that are obviously pretty good players. Guys like [Trevor] Cahill and Gio Gonzalez, obviously, they are All-Star pitchers, and I just wish the fan base supported them a little bit more."

I love you C.J. Wilson (but not as much a Napoli).

The science of scouting: A biomechanical look at Gerrit Cole - The Hardball Times
Cole's maximum lead knee height is 48.01 inches, giving him a relative measure of 63.1 percent of his standing height of 76 inches (error unknown). Research indicates that the best pitchers have a maximum knee height between 60 and 70 percent of their standing height.

Cool article showing how intricate the analysis of a pitcher's mechanics can be. Actually, it's mostly over my head, but the pictures are pretty.

A Quick Update On My Health - FanGraphs Baseball
To determine how effective the chemo was, they performed a bone marrow biopsy on me earlier in the week. The results of that test are in – I officially have no more leukemia in my body. The doctors won’t say I’m in remission until they discharge me from the hospital in a week or two, but given that I’m currently cancer-free, I’m happy to use that term, even if it is technically a little premature. 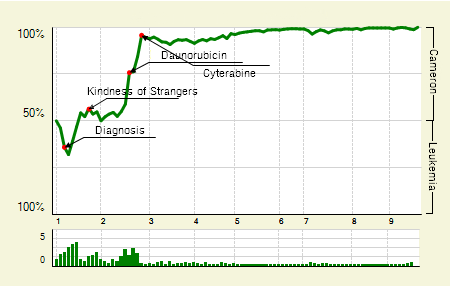 This is the best news of the week. Seriously, everyone at HH wish Dave continued improvement and success in his fight.

Some guy makes a nice catch without dropping his kid...

Deer antler spray manufacturer defends product - CBSSports.com
"Deer antler, although known to ancient Chinese medicine, has only recently been in the public eye due to the increasing body of evidence of its effectiveness to maximize the body's potential," Lentini said, comparing deer antler spray to human growth hormone in that it provides "all the benefits of having growth hormone without actually taking growth hormone." Deer antler velvet, taken from deer before they fully mature and their antlers turn to bone, holds IGF-1, an extract of the antler that closely matches naturally-occurring growth factors when HGH is released into the body. IGF-1 allows muscle to use fat for energy, moderates the immune system, reduces fat and promotes muscle-building. Naturally-occurring IGF-1 is made in the liver. 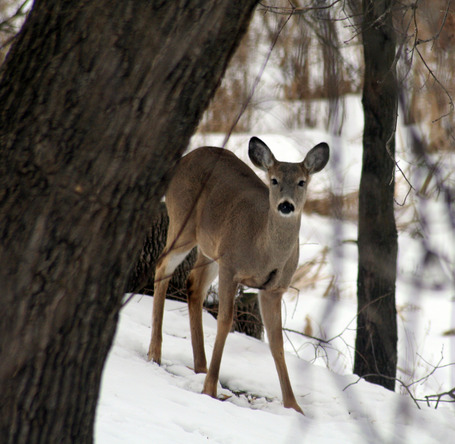 Notice there are no antlers on the deer hanging around my backyard.

Card Corner, 1971 Topps: Thurman Munson - The Hardball Times
For awhile now, I had tried to figure out the identity of the Oakland player, but that was made difficult because the runner appears to have been called safe. It could have been most anyone on the 1970 A’s, assuming that the photo was taken that season.

I like these "try and figure out who and where this is" type articles. Especially when they include baseball cards.

Tech-savvy players use iPads to gain edge over opponents - FOX Sports on MSN
"Now guys can do trades on email and text," Amaro said. "They throw names back and forth that way. ‘Would you mind moving this guy? Is that guy available?’ Sometimes it’s important to have a conversation, because maybe things pop into your mind a little easier that way. "The communication happens so fast now. There was a report (last month) that (outfielder) Dom Brown was available, and right away I got 15 calls or emails or texts from different GMs about it. I had to tell them, ‘No, he’s not.’" Amaro, who acquired outfielder Hunter Pence from Houston on July 29, said he used the iPad to conduct negotiations over email while watching Phillies games last month.

This is mostly an ad for some Bloomberg app, but there are some interesting tidbits about players and their iPads. I remember reading something last season about the large number of iPads in the Angels' locker room and how some of the players were playing games against each other prior to taking the field.

World Series Win Probability Added Leaders - Beyond the Box Score
Holy Matsui! Godzilla owns a 1.213 OPS in two World Series. If you time those hits well, you can rack up some serious WPA. Willie Aikens appeared in just one World Series, but posted a 1.638 OPS. Yikes.

Verlander K's 10 to earn 17th win, Tigers avoid sweep - CBSSports.com
Verlander gave Detroit in the exactly what it needed, becoming baseball's first 17-game winner and getting his 100th career win as the division-leading Tigers opened a three-game lead in the AL Central with a 4-3 win over the second-place Indians on Thursday night.

An update on the player who I think will give Jered Weaver the most competition in the CY Young voting.

Matsui Godzilla Again - MLB Baseball Analytics
Hideki Matsui of the Oakland Athletics found his stroke after the all-star break. After a 4 for 6 on Thursday, he's hitting .432 after a .209 first half.

Didn't he do this last year for the Angels?

Why Strikeouts Stink - FanGraphs Baseball
So the sabermetric truism has stuck: strikeouts aren’t that bad. Hitters can have high strikeout rates and still contribute loads of offensive value through their plate discipline. After all, the end goal is not making an out, right? It shouldn’t matter how a player does it, simply as long as they reach base at a high rate and avoid making outs. But there’s a problem with this logic.

"God Bless America" and baseball, 10 years later - FOX Sports on MSN
Before the start of the 2002 season, Selig sent a memo to all the ballclubs giving them the discretion in choosing when to play ''God Bless America.'' ''Everybody should do what they think is right,'' he said. Most teams scaled back, and Los Angeles Angels outfielder Torii Hunter sees nothing wrong with that. Failing to play the song doesn't diminish the memory. ''I think it's OK to move forward,'' Hunter said. ''Most ballparks do not play `God Bless America' every game. But you'll never forget that day, the people who fell, the people who have fallen in Iraq and Afghanistan since then.''

August 12 - BR Bullpen
Events, births and deaths that occurred on August 12.
1912: Three men attack Ty Cobb on his way to the Detroit rail station. Cobb sustains a cut on his shoulder, but catches one of his attackers and pistol-whips him. Cobb then travels to Syracuse and gets two hits in an exhibition game.
1974: Nolan Ryan fans 19 batters in the California Angels' 4 - 2 win over the Boston Red Sox. Ryan breaks the American League record of 18 strikeouts set by Bob Feller in 1938 and ties the ML record set by Steve Carlton in 1969 and Tom Seaver in 1970. He also ties the ML record with 32 Ks in his last two games.
1994 - Major League Baseball players go on strike. For the first time in 90 years, the World Series will not be held. Matt Williams' assault on the home run record held by Roger Maris is halted.
Happy b-day:
1880 - Christy Mathewson, pitcher, manager; Hall of Famer (d. 1925)