Lackey has plenty of fans in Red Sox clubhouse - The Boston Globe
"We never really doubted him or thought anything different. He takes the ball every fifth day and usually gives us a chance to win,’’ Saltalamacchia said. "What he’s going through this year and still being able to perform, you can’t really explain how much that means to the team. "He has a lot of support around him from us. But at the same time, he comes to the field and supports us.’’

Emotions are a hard thing to deal with. Sometimes they're best dealt with in private, among your family and friends, while others feel the need to go about their lives as usual, dealing with their feelings internally. When reading the linked article, Josh Beckett mentions he'd be long gone. I get what he's saying, it might be better to be at home, but if I were looking for a man to look up to, I'd pick John Lackey.

Jim Thome's mark should not be overlooked - FOX Sports on MSN
The moment was nearly as magical as Derek Jeter’s home run for his 3,000th hit and subsequent 5-for-5 performance, but I doubt it will be portrayed that way. OK, maybe the moment wasn’t as dramatic as Jeter’s home run for 3,000, and it didn’t occur at Yankee Stadium on a sparkling Saturday afternoon. No matter. This was a big deal. As big and as well-deserved and as satisfying as it gets.

This article, or at least the part that mentions Derek Jeter, really pisses me off. You know how many players have reached 3000 hits? Twenty-Eight. Jim Thome is only the 8th player to hit 600 home runs, a feat much tougher and completely more exclusive then Jeter's 3000 hits. Rosenthal, you're right - this is a very big deal. So why cheapen it by comparing it to a lesser accomplishment?

Rangers 8, Angels 4: Three Up, Three Down - ESPN Los Angeles
The Bad: Catcher problem. Let's dispense with this first: The Angels traded Mike Napoli because they didn't want to pay $6 million for a guy who was only going to catch 60 games a year because of a history of arm injuries. But yeah, it hurts in retrospect. Napoli smacked his 19th home run. Meanwhile, Angels catchers collectively are hitting .199 (30th in baseball) with 36 RBIs (25th). It seems ridiculous for Hank Conger to be playing at Triple-A when his bat is needed in Anaheim.

Mark Saxon joins the "WTF? Why Are The Angels Playing Mathis?" party. 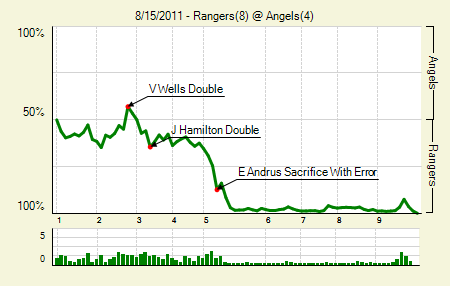 Angels fighting a sinking feeling - ESPN Los Angeles
"As you keep struggling with some things and playing inconsistent baseball, that opportunity narrows, so you have to pick it up and play," Scioscia said. "That's what we're going to focus on." It's about pitching because that's what it's always about with this team. The next guy to try to save this season is another rookie, Tyler Chatwood, who has one win in his last seven starts. The Angels haven't scored a single run while he was in the game in seven of his eight losses. Good luck, kid. Oh, and try to save the bullpen while you're at it.

What? Linking to two Mark Saxon posts in one day!?! The reason this link is here is because it points out a sad fact regarding the Angels hitting and Tyler Chatwood.

Angels pitching in shambles after Richards injury - CBSSports.com
"Garrett tonight, his stuff looked great," Scioscia said. "It looked crisper than it did in New York. He had a tight slider. "That's what's disappointing, not seeing that part of it play out." In his major league debut last week in Yankee Stadium, Richards was clobbered for six hits and six earned runs (and two home runs) in only five innings. Despite his "tight slider", Richards was on the ropes against the Rangers when he went down. Ian Kinsler drilled a double to lead off the game, moved to second on catcher Bobby Wilson's throwing error and then scored on a ground ball. Michael Young reached base on a two-out single, and then Richards was injured while delivering a 1 and 1 fastball to Nelson Cruz.The Angels now have lost five of their past six games, falling from 1 1/2 games behind Texas to five back in the past six days. Tuesday, they'll hand the ball to another rookie starter, Tyler Chatwood, as they attempt to keep Texas from running away with the division.

This is funny to me. Scioscia was disappointed because Richards had good stuff in the bullpen, although it, at least briefly, didn't successfully translate into the game. Might help to explain something..."Jeff was really crushing the ball in batting practice."

Peter Bourjos has them covered - ESPN Los Angeles
"He has superb instincts," the scout said of Bourjos. "He takes proper angles to where hard-hit fly balls, and deep-and-smoked line drives will land. He lays out to make plays and has no fear of the wall. His footwork and mechanics are sound. He has a quick first step [reacting to the ball] off the bat." Those who watch him say they think Bourjos can get even better. The scout warns that Bourjos, who spent time on the disabled list earlier this season with a hamstring injury, may end up a DL visitor in the future due to his aggressive style "He sacrifices his body all the time," Wells said. "He has one goal in mind: catch the ball no matter what is in his way."

Some Peter Bourjos-love from the four-letter network.

Rangers planning Shannon Stone statue - HardballTalk
The statue, which is tentatively set to be named Rangers Fans, will feature Stone along with his 6-year-old son, Cooper. The two were at the game together when Shannon Stone tumbled over a Rangers Ballpark railing catching a thrown ball from Josh Hamilton and fell to his death.

When I first read this post I thought, "Wow, what a great thing to do. The Rangers are a classy outfit.", but then reading the comments to the article like this one:

Not to be insensitive, because I still grieve for this man, his little boy and family, but isn’t a statue a bit too much? It was a horrible accident, but, seriously, is this worthy of building a statue of him? Teams build statues of great, Hall of Fame players, but someone who dies tragically also deserves a statue? PC crap gone wild. And don’t tell me I am insensitive because I was one of the first people on this board that offered my condolences. This is too much. Instead of this, Rangers, pay the kid’s college tuition and leave that as a great gesture.

I might have changed my mind. Not that the Rangers are being classy, but are they doing too much?

Sure, the OBP is lacking, but geez, give the kid a break...22 home runs is no small feat.

Yunel Escobar is the best shortstop in the American League - The hardball Times
Dwayne Murphy and Co. have been gaining notoriety around the MLB for their 'grip it and rip it' approach. The rough theory is this: you know which pitch you can hit off of a guy, sit on it and hit it when you get it—seems simple enough. Even though it isn't a revolutionary philosophy the evidence of its effectiveness has been seen throughout the Jays’ line-up, and Escobar is a beacon of success. It certainly explains the low swing rates as Escobar has simply been holding off on the pitches he's not looking for, and he has been excellent at taking pitches out of the zone.

I've added this link just for the mention of the Jays hitting approach. Kind of seems like a no-brainer don't you think? Just swing at pitches you know you can hit. Someone please notify the Angels' offense; no swinging at bad pitches. Never.