The Angels Will Win The AL West, Mark Trumbo Is Neat. Halolinks.

Share All sharing options for: The Angels Will Win The AL West, Mark Trumbo Is Neat. Halolinks.

Trumbo had narrowly missed a home run earlier in the game, and as he stepped into the batter's box to face Adams, he looked to Hunter at first base. Hunter looked back and made a slight, encouraging swinging motion. This time, Trumbo didn't miss. "It was extremely important for us to win this game," said Trumbo, whose home run was his 23rd of the season, just eight behind Tim Salmon's Angels rookie record of 31. "We're still in this thing despite what other people might think. We're optimistic, we're going to keep battling and see this through to the bitter end.

Regardless of how this season sends, Mark Trumbo's season will be one of the things I will remember. Considering I never thought he'd last the first month, color me happy.

Trumbo's winning blast energizes Angels - The Orange County Register
The glaredown continued as Napoli rounded the bases and trotted into the visiting dugout. "I don't know what you're talking about," Weaver said when asked about the exchange between the two former teammates. "The guy's a friend of mine. Pretty much joking more than anything." Hardly. Napoli, on the other hand, delivered a better punch line after the game. "I don't think he was too happy," Napoli said. "What's the matter – you're not allowed to hit home runs off him anymore?"

This was pretty amusing to watch. I don't think Napoli did anything wrong. He might have stood at the plate a millisecond too long, but Weaver's reaction was completely douchetastic...in a good way. You want your ace to get pissed when he gives up a run. Especially to his former wingman.

Six* reasons the Angels are still in it - Sam Miller - The Orange County Register
The Angels have about a 6 percent chance of making the playoffs, which is just terrible. But you know what 6 percent is? It’s flipping heads four times in a row.

Now if we could find a two-headed coin. 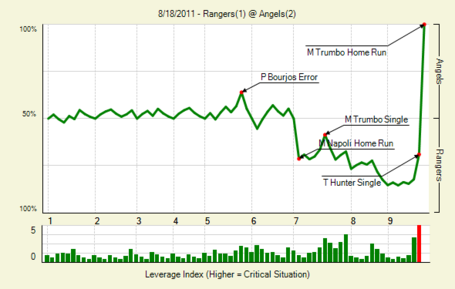 Here are a couple of Shoemaker's quotes after the game:

"Obviously you go out there every time and try to give your team a chance to win and put up zeros,"
"Each time I go out and pitch, I just try to compete,"
"I owe all my success to God. Without him, none of this would be possible."
"Win a championship, keep getting better, all that stuff,"

Straight from the Crash Davis School of Baseball Interviews

Mark Saxon has either grown a set, or has been reading HH and been converted by the Rev.

You Know Who Would Have Helped the DBacks? - FanGraphs Baseball
It’s a trade that — if avoided and all else were held constant — would likely have the D-backs with firm handle on a playoff berth. It’s a trade that sent one of the best starters in baseball, Dan Haren, to the Angels for Joe Saunders, Tyler Skaggs, Rafael Rodriguez and Pat Corbin.

Yeah, well you can't have him!

Watch for the fake! David Wright dupes Maybin with great play - Yahoo! Sports
David Wright is quite a little faker. After making a terrific diving stop on a sharply hit ground ball Wednesday afternoon, Wright hoodwinked San Diego's Cameron Maybin(notes) into making a baserunning gaffe. It was one of the best defensive plays of the season for the New York Mets — or for anybody.

This guy would look good in Halo Red.

With mightier pen, aggressive Rangers pulling away from Angels - CBSSports.com Baseball
There will come a time when the Rangers will need the deception of both Adams and Uehara, October nights in New York or Boston, the crowd roaring, the tension screaming. They will not need it against an Angels club that has been grossly out-flanked since at least last December, when Reagins memorably said that the Angels already had made a "huge splash" during the winter in signing Hisanori Takahashi. If that's what you consider a huge splash, maybe second place is where you belong.

August 19 - BR Bullpen
Events, births and deaths that occurred on August 19.
1900 - In American League action, Rube Waddell throws two complete games as Milwaukee sweeps a doubleheader from the Chicago White Stockings, 2 - 1 and 1 - 0. After throwing 17 innings in the first game, the colorful southpaw is coaxed by skipper Connie Mack, who promises him a few days off to go fishing to pitch the nightcap, he hurls a five-inning one-hitter.
1921 - At the age of 34, Ty Cobb becomes the youngest player to collect 3000 hits when he singles off Red Sox hurler Elmer Myers. ESPN missed this story as they were covering Derek Jeter's great-grandfather's fast-pitch softball game.
1950 - The Gillette Safety Razor Co. pays $800,000 for TV rights to the World Series. Radio rights will add another $175,000 more.
1992 - Mariners 2B Bret Boone makes his major league debut against the Orioles. By doing so, he becomes the first third-generation player in the major leagues, following in the footsteps of his grandfather Ray, and his father Bob. Boone goes 1 for 4 and drives in a run in Seattle's 10 - 8 victory.
Happy b-day:
1958 - Gary Gaetti, infielder; All-Star