Share All sharing options for: "I'm here, and that's all I care about."

The Los Angeles Angels held their press conference to formally announce the signing of Jered Weaver to a 5-year, $85 million, contract extension, locking him up as a Halo through 2016. (This smells more like a re-writing of his existing contract, considering that it was in effect through another year anyway. So this is only 4 ADDITIONAL years to what he had already committed.) 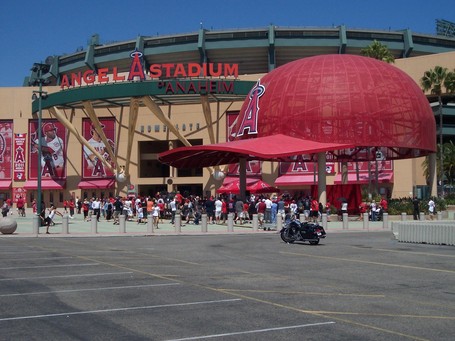 A link to all the pictures I took are at Flickr, here.

On an incredibly gorgeous day here in Anaheim, California, the gods of destiny puffed out their chests, bellowed a hearty guffaw, and blew away any thought of clouds in our skies as they mocked at the notion of Jered Weaver, SoCal's Surfin' Flamethrower, leaving the Superior Coast for the bugs, humidity, rusty gutters and dirty snowbanked sidewalks that are East Coast baseball. 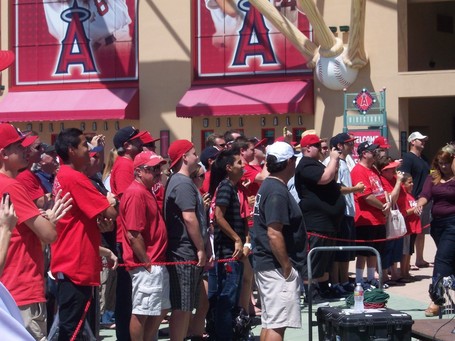 About 150 people were in attendance (not counting the fresh-faced LAA employees), milling outside the ropes under the bright skies of a 90 degree day kissed by a gentle breeze from an ocean a mere dozen miles away as Angels fly. They eagerly awaited their hero, and the chance to relish in the rare moment of one of sports' greats willingly choosing to play in front of them instead of dashing off to some manufactured Little League park swamped with overpaid and underworked media dinosaurs, all in order to snatch a paycheck that only their great-grandchildren might possibly find a use for. 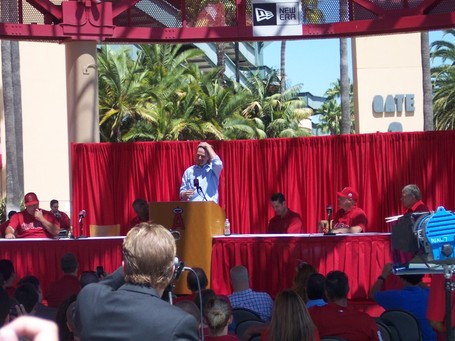 In the run up to the press conference, the crowd gleefully cheered the arrival of Mike Scioscia, Jered Weaver, Mike Butcher, Ken Forsch, Victor Rojas, Bill MacDonald, Mark Gubicza, and Jose Mota. It was a nice respite from the droning of Roger Lodge over the PA system as Roger was forced to vamp through the last few minutes of AM830 air time prior to the 2pm sharp kickoff. Few things are as unfortunate as listening to Lodge pretend to be knowledgeable and trying to gin up some excitement when everybody present is already jazzed beyond his understanding.

Rojas got things started on time for the media feeds present (which were enjoyed here) and I must say, the dude rocks as a host. He could use a little more snarkiness for my taste, but he sure runs a tight, informal, informative and comfortable show.

It was cool to see Jered's parents and his fairly smokin' hot fiancee in attendance. But where was Jeff? Hrmmm. Mike Scioscia was the first to the lecturn and smacked the crowd silly with one cliche after another. But he DID leave us with the gem of calling out Mike Butcher, warning him to "Don't mess it up!" in reference to being gifted one of the top MLB pitchers of our time. Was he joking? Really? Completely? After Garrett Richards and Scott Downs injuries last week? Another Hrmmm. Just sayin'... 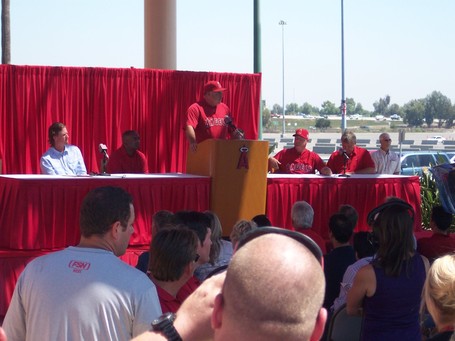 Tony Reagins got to speak next. (Yes, he DID get booed pretty loudly!) I wonder what it is that he was saying? Did I miss anything that we did not already know, or have hashed through beyond measure over the past 48 hours? Except for finding out that Arte is back east in MLB meetings so TR and Sosh were working with Arte remotely, this seemed to be about what I would have expected Tony to say. All in all, he "didn't mess it up", so I have to give him his props.

Then came Weaver. Jered worked hard to stick to the script and stay within himself, working within the mechanics of his MLB media training. But as soon as he got to the point of acknowleging his mom and dad he lost it. As a dad of a pair of two great sons, myself, I totally understood the magnitude of that. It was his finest moment. Weaver had to slide on to the balance of his speech in order to hold back his tears and he basked in the love that poured forth from behind the ropes.

We then broke to questions from the Privileged Few. At least 2 of the 4 or 5 questions came from voices that sounded oddly like LAA broadcasters. No questions, of course, were taken from the fans. Curse and swear over east coast media all you want, at least those people would refuse to lay down and lob soft toss to the faces of a franchise that are quite skilled at hiding what they are are doing with a public trust. And at least those guys would try and generate some information we cannot discern without their help. 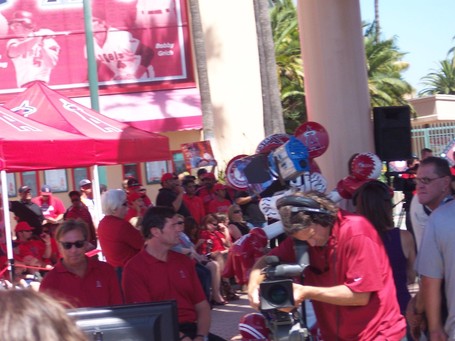 And that is too bad. Because the best quotes of the whole day came when Jered was granted the opportunity for a free flow of consciousness. Given half the chance, we got a chance to glimpse pure Jered Weaver Gold:

"How much more money do you need? I’ve never played this game for money. I play it for love and for championships...There comes a point in time when you do have to deal with the business side of things, but I don’t think money had anything to do with my decision. I could have gotten more, whatever, who cares? I’m here, and that’s all I care about." The crowd roars! We could have used more of that.

The fans themselves were great. They were extremely enthusiastic, and Long Beach State was well represented. The one moment that stands out is when Rojas announced the contract and, when he got to the point of stating "5 years" the guy next to me (with a child on his shoulders) shouted back "Not enough!"

And I guess that is how I feel. I dig Weaver, too. And I cannot get enough of his success, either. All I need now is for Weave to bring home the CYA. In 2012. As I predicted back in 2006.

UPDATE: I finally got all the photos uploaded to SBNation, and I am including them here as a photo essay. This will save you all the trip to Flickr!