Matchup 7; Round 1: Dono Romantico vs rghan

Share All sharing options for: Matchup 7; Round 1: Dono Romantico vs rghan 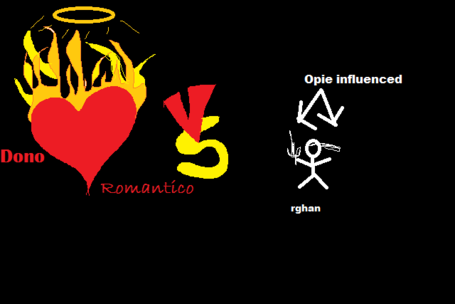 (As per request, Dono gets his flaming heart with a Halo above it because he emailed me such. Since rghan did not email me a request I assume he wanted a basic stick figure. Let that be a lesson to all of you going forward.)

The Madness So Far: 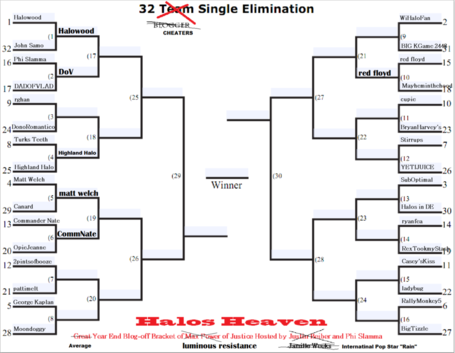 Its official: Phi Slamma's First Annual Unnamed Bracket Tournament of Champions of the World is a big deal.

You know something is a big deal when it attracts controversy, rumors of cheating and shady doings, drunken angry emails to my gmail account at the wee hours of the morning demanding recounts/asking for justice/crying endlessly. Before you make assumptions it was not just from the people in the last matchup, it was from a bunch of people legitimately worried their own future matchup might be corrupted if something was not done fast.

I have no way to actually tell with my access how the voting is going down, however, I assure you people are on it. It might be the case of more people voting and a misconception of how the poll system updates itself. Being relatively tech savvy I can tell you if someone were trying to sway the polls it would take quite a bit of effort and know-how, and most likely, would be reflected in the thousands, and not dozens of votes..... 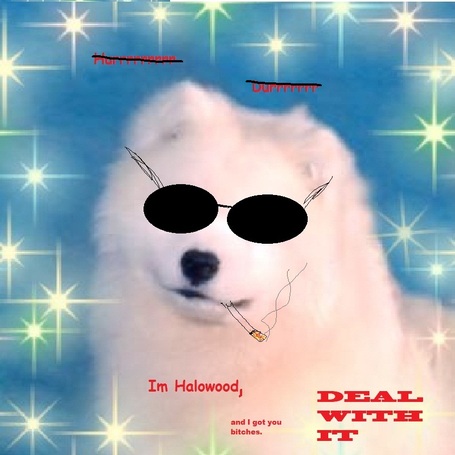 (Halowood has found a way to get his revenge. Well played sir, well played.)

Reminder: Email me (mrguyofstuff2@gmail.com) ahead of time, get bonuses. What bonuses you ask? Oh, something along these lines:

THIS IS WHY DONO ROMANTICO IS AWESOME:

All that you need to know about Dono Romantico. Born and raised in SoCal (currently residing in San Diego) Stathead I am NOT! Follow the game with my senses and believe with my heart and mind. Love keeping things light and humerous on HH. Let's all figure it out and get along.

How I became an avid Angels fan: Through fate (if you want to call it that) I was fortuneate enough to work with someone who's brother was a big league pitcher for the Mariners (Matt Young). So every time they played the Halos I was hooked up. Then it would turn out that Matt was traded to Los Doyers, so I was able to meet the players up close and personal, sit in the dugout before the games and hang with Tommy Lasorda. It also made me realize just what a crappy place Chavez latreen really is. And that most Doyer fans belong there. I was never a hater of the Doyers, but because I was fortuneate enough to get up close and personal with the Doyer players I became a bigger fan of the game of baseball. Turns out that Matt Young was traded to the A's and in 1988 was on the losing end of that year's WS against his former team. Moving to Newport Beach in '92, I started following the Halos much more closely, met one of my best friends who ended up turning me on to halos heaven, and started attending numerous Angels games.

In late 2007 ended up selling everything and moving to Costa Rica for nearly all of 2008 after going through an emotionally draining divorce. Best place I've ever lived. Nothing was better than sitting in my favorite bar on the beach in Playa Samara and watching Angels games while sipping my 23 year old rum and drinking an ice cold Imperial. As it turns out, I am back together with my ex and 2 boys and loving life!

2. Attending nearly every practice and spring training game in 2007 with my youngest son. Getting to speak to Arte Moreno on a personal level several times & being treated like family by nearly everyone working for the Angels that spring.

3. The day before game 1 of the 1988 WS., walking onto the warning track in Dodger Stadium and being greeted with a hello by Dennis Eckersly who was jogging by, then proceeding to sit in the visitors dugout with the Oakland A's watching Jose Conseco take b.p. while sitting next to Mark McGuire.

4. The numerous Angels games I've been able to attend with my two sons.