Remember the good old days of baseball, hot dogs, apple pie and minor league instructors? Well the Angels only have two of those today as the 2012 minor league coaching staffs were officially named in a fancy-schmantzy press release sent out as a pdf to the "gruel for the non-print bloggers" email list.

The Angels have summarily abandoned all minor league instructor positions. Instead, everyone is now called a "Coordinator".

For example, Orlando Mercado goes from Roving Catching Instructor to Roving Catching Coordinator. Gary DiSarcina goes from unfathomably terrible baseball player to Field Instructor to Field Coordinator. Compensating for the dark cloud of DiSar gloom is Angels great Dick Schofield, the Roving Infield Instructor no more... Dick is now the Roving Infield Coordinator. With Marcel Lachemann now special assistant to Jerry Dipoto, is it any surprise to see Bill Lachemann as the Special Assignment Catching Coordinator (does he walk in with the pair of bronzed Jeff Mathis cleats and tell the rookies: you must one day fill these" ?!?!?).

Just because you are an Angels Coordinator and you are no longer instructing does not mean you aren't carrying a bucket full of responsibilities... Ty Boykin is officially the "Roving Outfield / Baserunning and Bunting Coordinator". Impressive, although you have to winder who officially instructed Boykin on how to coordinate all that.

Going down the list we see that Scott Servais brought over his buddies from the Texas farm system as Bakersfield Blaze manager Bill Haselman is now the 66ers Manager. Tempe has two pitching coaches (not coordinators, COACHES) that are ex-major leaguers: Jim Gott and Matt Wise. The legendary Nathan Haynes is Tempe's hitting coach. The best name in the entire Angels system is not Albert Pujols. It is returning Orem Pitching Coach Zeke Zimmerman. No word on his relationship to Bob Dylan out of the front office. Zeke works with the legendary Tom Kotchman. Tom's a manager. What is the difference between a manager and a coordinator? One wears a uniform. 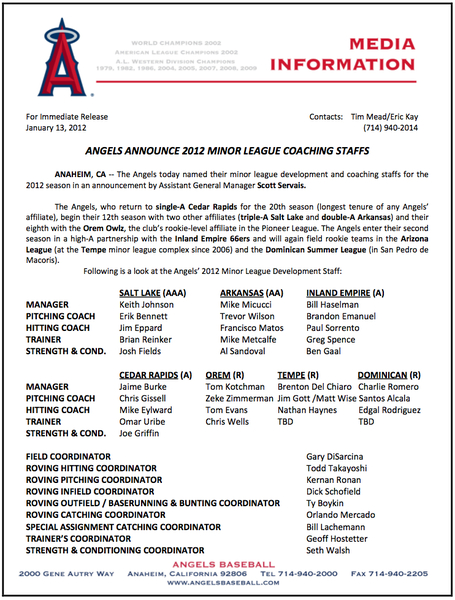