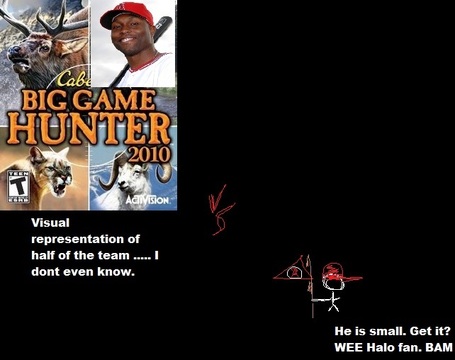 (Big Game 48 submitted his part. WiHalo is a jerk and sent me nothing, so I made him into a midget. This is why we can't have nice things, Wi.) 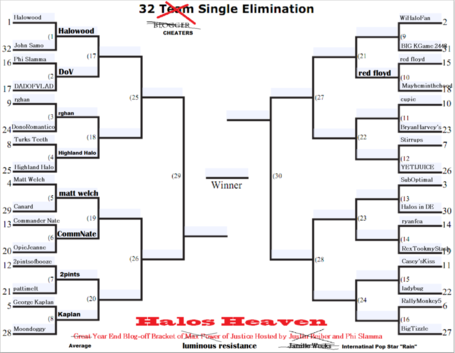 (I am assuming Kaplan is going to win as of 12:07 when I am posting this. If it changes I will change the bracket.)

Let me be the first to say that this matchup makes absolutely no sense. Sure, at the time of compiling the bracket I thought it would be funny to put two newer posters (Big Game 48 and KB_24) against the Immovable Force that is the WHF. Since only Big Game emailed me his shizzle I can only assume KB_24 is going to act as a closer and bring the pain in the actual thread itself. Who knows how this is going to work, I sure don't.

The vote tallying is entirely ridiculous. It displays different totals literally everytime I check it, varying wildly. Could be vote bots, could be that SB Nation did not account for the fact that someone could be a bad enough dude to create an entire offseason series centered around a poorly programmed voting system. Could be space rabbits. Could be super LA insider Scotty Allen.

As of now Rev has still not used his Wild Card powers, which puts me on edge. I feel as if at any second he could burst out of nowhere like the Kool Aid man with more editing powers and bring the pain down randomly on some unfortunate soul. I have starting preparing for the Halowood vs DoV matchup, and I can safely say that one of the posters has absolutely no chance at moving on. Not going to name names, but DoV needs to step up his game... thats all I have to say.

The degeneration of this series into some sort of venting process to closely document my twisted descent into the oblivion that is my own mind is apparently popular. I received around 50 emails encouraging me to continue chronicling my personal adventures with each post in the series. I hope people are not expecting me to die at the end. We may as well call the bracket challenge "Phi Dies at the End, The Game".

Since the last post of drunken poetic ramblings not much has happened. Wine and Game of Thrones was enjoyed last night, culminating in a surprise visit from She-Who-Shall-Not-Be-Named. A drunken discussion followed. TIll 5am. The woman has more issues than the X-Men comic books. My boner for chaos and unstable women remains resolute. 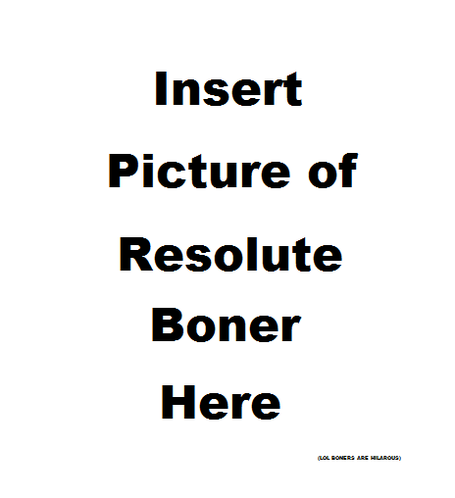 I can hear you now:

"This is only going to end in disaster"

"You know you like dudes, stop pretending you dont"

"Women don't satisfy your carnal needs, come to terms with yourself"

"The WNBA is actually enjoyable to watch"

Listen, voices in my head, I don't care what you have to say. I am going to try and change people who obviously have shown they cannot be changed. I'll fix it, damnit.

My next post will most likely be from phone, so it might be weak. If everything falls apart in dramatic fashion you can bet your ass a poorly worded diatribe will be posted somewhere. I have a totally not lame at all beer pong tournament Im going to be participating in on Friday, so wish me luck.

Big Game emailed (mrguyofstuff2@gmail.com) me this, so without further nonsense no one cares about, here is something that is actually relevant to your interests:

"As my vicious first round match up with WiHaloFan drew nearer, I gave some thought about how I would go about pulling off the colossal upset that would propel myself (and my partner KB24) into the Sweet Sixteen of the inaugural Halos Heaven Blogger Tournament. Several strategies crossed my mind. Maybe, I'll could come blazing down the ramp, spandex-clad, stand on the top turnbuckle and yell into the mike that I'm the biggest, baddest mofo in this arena. Or maybe I'll run a smear campaign in hopes of shamelessly plucking votes from the community by running Wi's name through the mud.
No... Those weren't going to cut it.
It didn't take long to realize the appropriate plan of action. I concluded that if I made a real effort to convince you all to vote for this HH rookie over a first-ballot Halos Heaven Hall of Famer like Wi, you would probably never take me seriously ever again. So instead I want to use this opportunity to praise the great community that is Halos Heaven. Collectively, you guys provide the perfect blend of knowledge, passion, history, and humor that cannot be matched anywhere else. I can only hope that my participation is appreciated in the same way that I value everything you all bring to the table on a daily basis..... My other hope is to draw a better seed in next year's tournament cause this one is fucked up.
Wi, may your arsenal of Halolinks and cartoon wit take you to the promised land. Good luck the rest of the way.... Next year the gloves are coming off!
Go Halos."