Share All sharing options for: Matchup 12, R1: Stirrups VS YETIJUICE 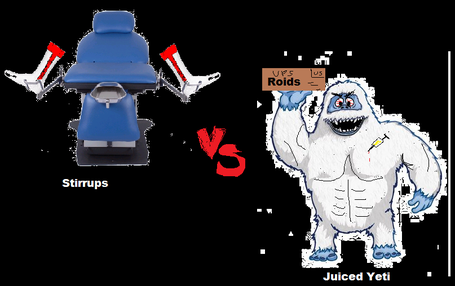 (Stirrups sent me his. The tagline was "Where I got my handle...attached!" Gotta love Stirrups)

Hosting parties at a new place you just moved into can have some serious consequences and is generally a bad idea. I'm sure at least one of you is wondering why this update is two days late and why the last one was awful, well, it has to do with puppy calendars. Let me explain:

I've hosted more parties than I care to admit. I had such a consistent flow of planned debauchery at my household when I was in high school it actually spawned a fake drinking fraternity. From the drinking frat spawned my user name. Good times. When you host as many of these awful things as I have you get bored of just having people over to drink, so you try and get creative. This is usually when you come across the Toga/80's/whatever parties that people throw from time to time. I also hate these.

So, trying to be clever over the years I've come up with a few gems. The last one I was proud of was "Dress Like a Shitty Musician" party in which I went as the Epic Sax Guy. That went amazingly. However this last adventure into the creative drinking mind yielded less than savory results.

This move in party was a "Only 99 Cent Store" party. You see, I moved into a place with the most ridiculously awesome 99 cent store ever in close proximity. Those attending the party could only bring and wear things they bought that day from the 99 cent store, and must include receipt.

You would really be surprised what you can pull out of that place and look somewhat presentable.

The unintended consequences of this idea was that people were somehow more willing to bring a lot more adult beverages and adult beverage accessories because they spent 4 dollars on their entire wardrobe for the night.

-My 5 foot tall Panda that is featured in my icon for this site was stolen, recovered, stolen again, then found in the pool covered in leaves and mud. (Its a giant pain in the ass washing a stuffed panda that large)

-The outside table that has a tile top was half destroyed when a game of flip cup went horribly horribly wrong. You flip the CUP people not the TABLE.

-The mini-fridge became a mini-bathroom.

-A girl electrocuted herself in my bathroom so bad she had burns on her right arm. She was so intoxicated she continued to drink, after wiping off the char from her blouse. No amount of persuading would make get go to the hospital. I eventually gave up.

-Someone bought every single puppy calendar at the 99 cent store and tore out each month and proceeded to hand out puppy pages to everyone. Those puppy pages were shortly littering the ground. March was adorable. Puppy calendars are slippery on hardwood floors. Girls wearing heels stood no chance, pun intended.

-My laptop was used for music purposes and facebooking and whatever else. Someone destroyed it. I was sad. The cause was blamed on slipping on an aforementioned puppy calendar page and spilling a drink on the keyboard. December was accused, others fingered April.

All in all, it was a solid success. No one died, no cops came, and I woke up with my clothes on. However the resulting hangover and destruction of laptop, along with having a long weekend off from work led to the delay of the series. My apologies all around.

I have no idea if Yeti is around. Stirrups sent me his graphic, good work. The first round is starting to finish up and looking at the second round matchups has me all excited like a priest running a live action Rugrats the Movie casting.

clover_black, 44Fan, and The Limey were all widely nominated for replacement for BT. Feel free to suggest a few more and we can vote about it. 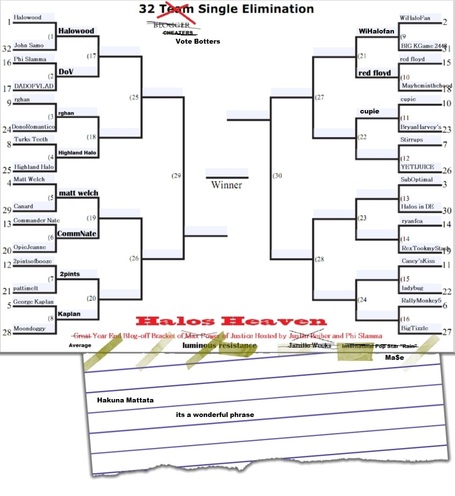