Share All sharing options for: Matchup 13: RexTookMyStash vs ryanfea  >>NEWS<< 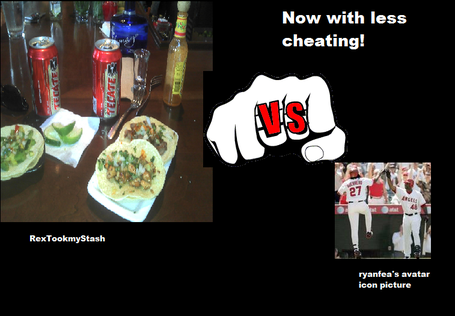 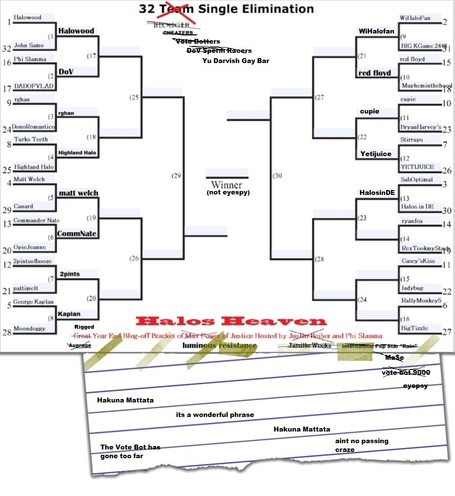 AFTER A FEW WEEKS OF fielding emails to the tune of "BRO WTF, LOLBAH" (The acronym for LOL Boners are Hilarious!) due to obvious ridiculousness with the voting system in this whole thing I believe we have solved this issue. The artillery has been called in. Enough is enough. You shall not pass. I got an email from Rev two nights ago saying a simple phrase that changed everything, making all matchups from here on out (sorry to those who got hosed already) legitimate. The email basically said this:

And then everything was more beautiful. The sky was more blue, I lost 10 pounds, my protein shake tasted like liquid muffins, my 15 year old Golden Retriever turned back into a week old puppy, Boston fell into the ocean, I won the lottery, and most importantly.....Votebot's mighty reign finally came to an end.

Now we will go by the format we use for the pregame picks, Ill post the voting spreadsheet, you click who you want then confirm in the thread. If you do not post a comment confirming your pick, your vote does not count. The end. Ill make sure to remind you of this about 27 more times since its important and at least one of you (Rex) will forget to do so. You can just vote, its cool.
I had somewhat of a busy weekend, however, I want to call to attention this particular thing from the last matchup, in case someone missed it: 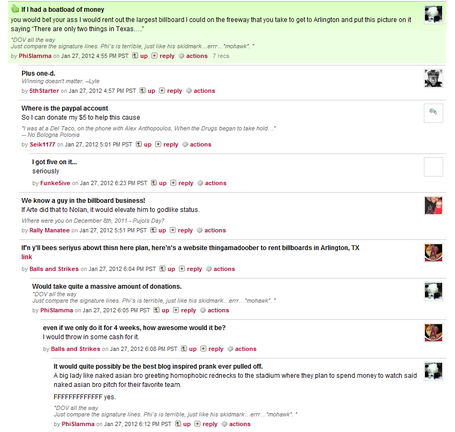 Now, I do not know what the actual realistic, feasible chance there is to make this happen but I think its worth a look. If somehow, someway we could get THIS PICTURE onto a billboard somewhere near Arlington Stadium in Texas with our blog name inserted, even if its for a week around opening day, then we win forever. Think about it. This could spawn an entire new offseason discussion on what should be on the billboard and where it should be located. Im waiting for some more info and Ill keep you posted. I honestly cannot think of a better way to start the season.

I would be willing to road trip it out to the arm pit that is Arlington to take picture next to a billboard featuring a naked asian man. Hrmm, I just realized I may never type that last phrase ever again without as much meaning. These truly are the times of our lives. Its like the movie Cowboys vs Aliens except the Aliens are feminine guys and they are not fighting but making out and Olivia Wilde does not (spoiler alert) die at the end. Harrison Ford as a bad guy totally does not work for me, by the way. The Actor Formerly Known as Han Solo is so acutely ingrained in my mind as the "Badass With a Heart of Gold Protagonist/Supplemental Protagonist" that any other role feels as wrong as using your left hand for some alone-at-night-cardio. If you know what I mean. *wink*. (Im talking about masturbation) (LOLBAH)

I wanted to wait on the spreadsheets from the might scottnak before posting this, so, the schedule has changed yet again. Ill just keep pushing this up until the winner is crowned during the Home Run Derby. If you want to have a specific image posted that is going to represent you before the jump on the front page of this illustrious website then email me at MrGuyofStuff2@gmail.com. Also, feel free to send whatever else you want to add to your matchup thread, or just say hi, or recklessly flirt with me (2pints). Also, after you vote, you better comment to confirm, or I pity you fool. Just voting is fine.

Also, whoever sent me a request for making salads and cake for their Dad's birthday party I must confess that I have limited cooking abilities. I tend to destroy the kitchen when making something as trivial as waffles, so cakes are completely out of the question.

SCHEDULE FOR THE REMAINDER OF ROUND 1:

Jan 31st
Casey'sKissofDeath (11) VS ladybug (22)
Feb 2nd:
RallyMonkey5 (6) VS TBD (27)
(We need to decide like now who we are putting in against RallyMonkey5. Ill put something below to get it decided.)

I got this email in regards to possibly buying a billboard near Ranger's stadium featuring a naked Yu Darvish:

The last two seem close enough and totally doable, even if its for a month. Considering how much traffic this site gets it would not take much contribution from each person to make sure Texas has that image burned in their head for a few weeks. Thoughts?