So Justin Verlander had to be happy. No bunt single, E1, screw-your-no-hitter-we-are-trying-to-win-a-baseball-game for him to whine about last night. Nope. Verlander's perfect game, his no-hitter, and his shut-out lasted all of 2 batters as Pablo Sandoval took the second pitch he saw and went yard, scoring enough runs to best anything and everything the Detroit Tigers could do while Verlander was on the mound. Beaten by The Big Bat. Like a Real Man. Justin must be satisfied. I presume. Verlander lasted all of 4 innings and saw Barry Zito mop the floor with him as the San Francisco Giants took Game 1 of the 2012 Word Series. And, with that last sentence, the Apocalypse is right around the corner.

And Sandoval was far from over. Three dingers in one WS game, all two against Verlander, yes, but then one more against Albuquerque. OK, that was mighty impressive. More impressive even than banjo-hitting Adam Kennedy doing his 3 home run dances against the Minnesota Twins in the 2002 ALCS that launched the Halos into the World Series against these very same Giants. Methinks that Sandoval "Twist" has no fear of one Justin Verlander: 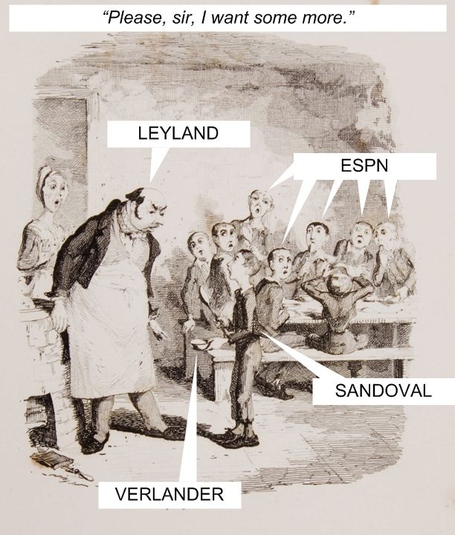 Could this be the first, original, World Series Trophy?