Mike Trout hit his first major league home run on July 24, 2011 in Baltimore. Not only was the hit a milestone, the story was remarkable.

Everyone now knows about Mike Trout. In 2012 he was the Rookie of the Year, Most Valuable Player runner-up, and producer of one of the best seasons in baseball history. However, before bursting upon the baseball scene last season, he was just another top-ranked minor leaguer. I write "just another" because he wasn't the most talked about up-and-comer, just one of the few who had the potential to have an impact on their respective team. Washington's Bryce Harper got most of the press, Trout just did his job.

On Sunday, July 24 of the 2011 season, the Angels were in Baltimore completing a three-game series against the Orioles. The club was in its first series of a 3-team, 10-day road trip after taking 2-of-three from the Texas Rangers in Anaheim. With a 55-47 record, the Halos were sitting in second place, four games behind the Rangers.

This game would be Trout's 12th of his career after making his debut in Anaheim against Seattle on July 8. Prior to this game, he hadn't produced much with the bat, getting just six hits in 34 at-bats. With a slash line of .176/.243/.235, Trout wasn't showing much to the Angel organization, nor their fans. Trout did show that he possibly was coming out of his early career slump by going 2-4 in his previous start. Also in that Friday night game, he hit his second double of his career, and stole his first base.

On this Sunday afternoon, heading into the top of the 8th, the Angels had a 3-2 lead. Albert Callaspo led off the inning with a line-drive single to left off of Orioles' reliever Mark Worrell. Howie Kendrick followed Callaspo's base hit with a bunt single to first. Mark Trumbo lined out to right field for the first out of the inning, bringing Trout to the plate with runners on first and second with one out.

Worrell started Trout off with an inside curveball for ball one. The second pitch, another curve, missed the strike zone up and away. Trying to not fall to far behind in the count, Worrell threw a fastball, yet he still wasn't able to get a strike as Trout took the third pitch for ball three. With the count at 3-0, Trout was taking the next pitch which was another fastball that caught the strike zone. 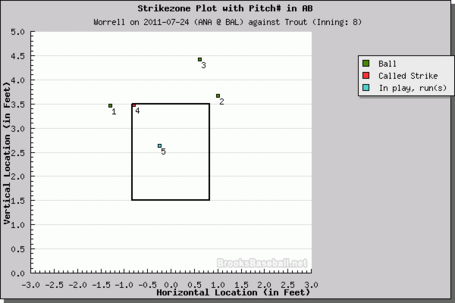 Trout stepped out of the batter's box, checked with third base coach Dino Ebel, and then stepped back into the box prepared for the 5th pitch of the at bat. Worrell once again threw a fastball, but Trout wasn't taking. The pitch was almost dead-center of the strike zone and Trout crushed it.

His first major league home run was a "no-doubter" as it landed 414 feet away.

Take a close look at the end of the above GIF and notice that Trout's home run was caught by a fan in the left field seats. The "fan" isn't a typical lucky fan who happened to be in the right place at the right time, but rather well-known ball snagger Zack Hample.

Here's what Zack blogged about that day: 7/24/11 at Camden Yards - The Baseball Collector. 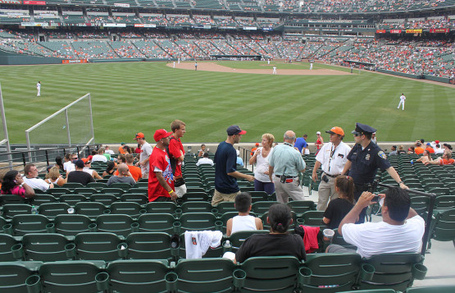 As you can see, an usher, security supervisor, and police officer descended upon my section within 30 seconds. By that point, I had been called over to the Angels’ bullpen by one of the players. (I think it was Bobby Cassevah.) He told me that it was Mike Trout’s first home run, and then he asked for it. I told him that I was aware of the significance of the ball and that I wanted to give it back to Trout myself.

As noted above, the Angels were playing a weekend series in Baltimore. Baltimore is a about a 2-hour drive from Trout's hometown of Millville, New Jersey and he had a group of friends and family in attendance. After Hample had caught Trout's home run, his parents went to see if they could get it for their son.

After a brief negotiation, Hample agreed to give the ball to Trout, but only if he was able to personally hand it to the Angels' rookie. 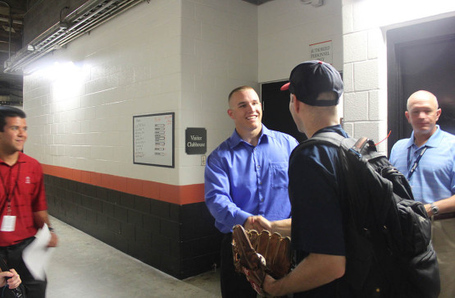 Trout would hit four more home runs in 2011, and another 30 during the 2012 season, but you always remember your first.