Weekend HaloLinks :: With gifts now unwrapped, it's time to wrap up the year and prepare to party!

Share All sharing options for: Weekend HaloLinks: Kick Out The Jams Edition

It's Party Time, 2012/3!!! Time for "Best Of" lists everywhere. These things are going to be popping up all over the place in the next few days, turning the entire 'net into Bleacher Report. Get used to it.

I may, or may not, have written about this before. If so, forgive my dying brain cells. Each year, when warm enough, I spend a weekend every month camping along the beach up the coast. During one such weekend this past summer I had the pleasure of meeting a fellow traveler who has close insight into MLB, via the Latin American player community. During one long particularly long conversation about the Angels, we got around to Mike Trout. Of course we discussed his talent and accomplishments and, during this, we talked about how opposing teams were dealing with the challenge he poses. This was when I was informed that Trout's actual impact was deep into the front offices of teams throughout baseball, in both leagues. GMs were having him scouted closely, building up files and databases, measuring his (overall!) impact, and considering how they were going to go about finding their own.

I review this anecdote in light of a series of articles being posted on SBN Baseballl concerning the "Best Of" for 2012. (Yes, it's that time of year.) Mike Bates writes about "The Return of Speed and Defense", exclusive emphasis on Mike Trout. Bates takes some flak in the comments about this fixation on one single player, but those complaints are made within the vacuum of not knowing. If what my new friend has told me is true, Bates is more correct than his detractors, or perhaps even himself, know.

This Date In Baseball History: 1957 - the first crack in the dam. CBS announces that they won't be broadcasting any MLB game into any city where there is a minor league game already scheduled..........1998: AP names Mark McGwire Male Athlete Of The Year in recognition of his advanced chemical-therapy regimen..........2001: New York Mayor Rudy Guiliani, on his way out of office, announces that both the New York Yankees and Mets will be getting new public-private stadiums..........2005: The Toronto Blue Jays convince Arizona Diamondbacks' third baseman Troy Glaus to waive his no-trade clause as the key part of a 4-player deal that capped off a very active Blue Jay off-season.

(Quick hits of interesting stuff that sit out on the fringe of our baseball emporium...)

Andruw Jones, now a Japan-League jerkwad..........Carlton Fisk, cornfield jerkwad..........Sometime Seattleites can convince everyone that their coffee is worth 6 bucks a cup, and sometimes they can’t..........Chipper Jones is not the guy you are going to want to call if your plumbing backs up..........Fangraphs is wondering what might have happened to the hips of Mike Napoli, thus holding up his contract with the Red Sox. I notice that their list of possible reasons fails to include Newport Beach WAGs..........Before we depart Christmas 2012 forever, a look back on the well-traveled career of that legendary baseballer, Santa Claus.

This weekend, on the verge on New Year's, shows no scheduled celebrations nor events, so I shall take the time to share with you a celebration quite recent: the used bottle caps from a pair of Westvleteren 12. These were enjoyed by myself and my sons RubixsQube and HaloVet, this past Christmas Eve. Truly excellent, though I must admit that my poor palette and poor nose cannot proclaim this to be the absolute finest beer I have enjoyed.... 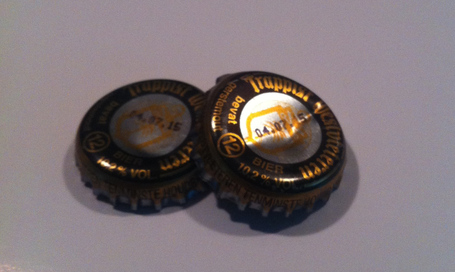