Share All sharing options for: Matchup 14: Casey'sKissofDeath VS ladybug 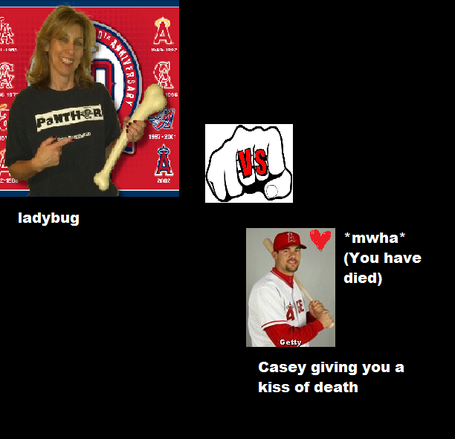 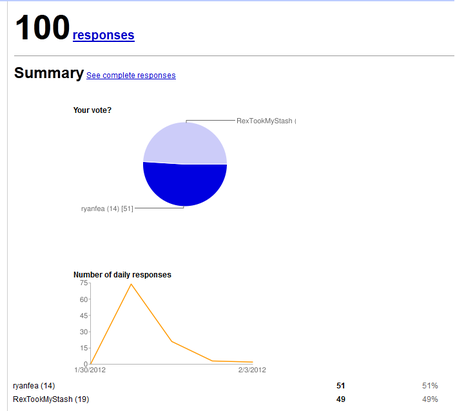 What We Got So Far: 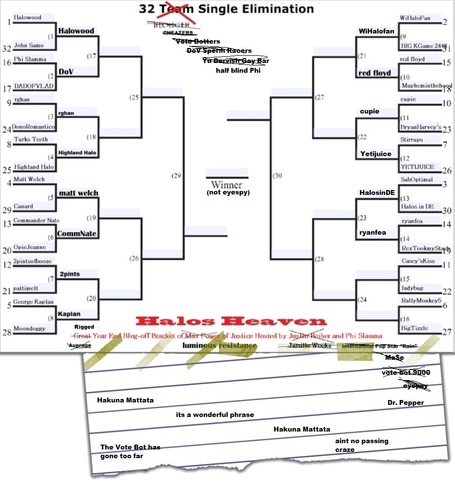 I need a new fantasy baseball league. How in the world is that relevant to this very delayed thread? Its quite a sad story, actually. Before I launch into that, lets all appreciate the non-vote-bot-tainted poll above. Mr. ryanfea won by 2 whole votes. Impressively close. The new forms will have you submitting your screen name as well to further prevent exploits.

I had to take a few days off to recover from Super Bowl Sunday. Not because I got all drunky and silly, quite the opposite actually. I have a close knit group of friends that all play fantasy baseball with me for the last four seasons. I put the league together, organized every draft, offseason meeting, rules, handled every drama filled call, every trade dispute, every during-draft-fist-fight.... everything. I feel as if its my ship, one that I have painstakingly built, crafted, and shined into what it is today. I also take great pride in preparing for my draft starting in January, spending hours to perfectly sculpt a pre-draft gameplan.

On Sunday there was a mutiny aboard my ship.

For those of you who have played fantasy with friends or co-workers know about that one guy in the league. The one guy who is super spiteful, super malicious, super annoying, or just tries to find every possible way to cheat or gain an advantage. I had someone who was all of the above rolled into one.

Long story short this person basically rallied the troops against me, with the premise of me cheating (I won for the first time last year) to kick me out of the league I created. Not such a big deal, right? Its just fantasy, who cares? Well as I was having a conversation, a rather annoyed one on my part, I was then physically demonstrated how little they cared for my presence in the league, or at that particular Super Bowl party. I was sucker punched and jumped, and as people tried to pull people off me someone dug their thumb so deeply into my right eye that I lost sight in it for a few days.

Needless to say it prevented me from posting at length here for a few days.

So.... if there are any competitive leagues that need a spot filled I would love to join. The more competitive and balanced the better. Fantasy baseball and its drafts are one of the highlights of my year and I wont let a little physical abuse get in my way.

(This was basically me on Monday. I might have had a pirate hat on, not sure. But probably.)

idea has been passed on the the SB Nation lawyers. The response was basically that if we intend to use "Halos Heaven" or "SB Nation" or its likeness we would have to run it through the legal gauntlet to get it passed. We could take a shot at Texas without mention of this site, but that kind of ruins the fun. This can happen two ways as I see it:

1) We just take the most trolltastic approach and levy a shot against Texas fans with no mention (or maybe a really obscure reference to the site) of who did it. An Anon approach if you will, but the site where it was brainstormed would be left out.

2) We carefully word and picture something that still pokes at the fans of Arlington, yet, do so in a way that passes the legal filters so the HH brand can be slapped on.

For either method I figure using http://www.kickstarter.com would be the best bet. Read up on how the website works so you can be assured your money is going to the right cause at the right time.

is another youngster VS female poster. The second round along with pitchers and catchers reporting is right around the corner. I am going to Red Bull up and get all of these out so if I end up in a ditch somewhere then they will still come up. Nak's voting docs have definitely nipped the voting thing in the donkey, which makes me feel all warm and tingly inside. Neither participant sent me a detailed case for victory, so they will have to do the talking below. Ladybug's picture made me laugh, it seems as if she also thinks that bones are hilarious and appreciates them significantly. I COULD have photoshopped (ok lets be honest, Paint-ed) something into that picture, but whats the point, its awesome as it is. Monday will be the finale of round 1, then I will post the full schedule of Round 2.

Also, Congrats to eyespy for taking BigTizzle's spot in the final matchup against RallyMonkey5. I know he REALLY REALLY wanted to be in, so, I bet he is fist pumping the night away right now.

One Left This Round:

Your username (username@) will be recorded when you submit this form. Not username? Sign out
Summary See complete responses