I've been seeing comments about batted ball statistics all over the comment sections of various websites. I'm not sure if it's a topic everyone is talking about, or if it's that phenomena where you notice more of what's been on your mind. Kind of like if you're thinking about buying a certain type of car, that's the car you see most often while driving around. I've been thinking about batted ball data, and it seems like comment sections are filled with questions about line drive percentages, and fly ball rates. Since it was on my mind, I decided to take a closer look. In this part, I'll go over the three types of batted ball types and the effect on batting average of ball in play. Part 2 will cover the batted ball data for the Angels.

There are three types of batted balls; line drives, fly balls, and ground balls. Fly balls are also broken down into infield and outfield fly balls. The batted ball data for a player will be displayed in percentage form, with the total equaling 100%, for instance, Mark Trumbo's batted ball data for last season is:
LD% = 15.9%, GB%=45.7%, FB%=38.4%, and within the total fly balls, 17.3% did not leave the infield.

What I wanted to do with this data is to see how it related to a player's batting average of balls in play (BABIP), specifically, which type of batted ball has the greatest impact on a players batting average. There's some common sense that goes into reading these numbers. Obviously, a line drive has a better chance of becoming a hit, right? I mean, unless a line drive is hit right at someone, the chances are pretty good it's going to fall in for a hit. Conversely, a fly ball, unless it leaves the park, is more likely to be caught than land between fielders. Makes sense, right?

The first type of batted ball I looked at was the line drives. Line drives are the most difficult type of hit to produce, and has the highest positive impact on a player's BABIP. Also, the difference between the best line drive hitter, Joey Votto (27.5%) and the worst, Vernon Wells (12.3%), has the lowest variance of the three groups (see that one data point way over to the left? Yeah, that's Vernon Wells...a true outlier). 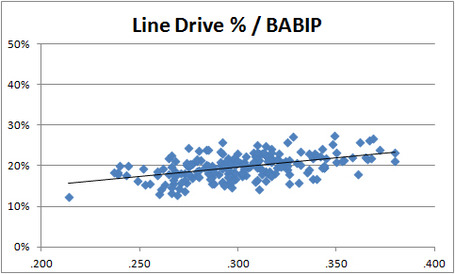 The other batted ball type that had an impact on a player's BABIP was their fly ball data. Typically, the more fly balls a batter hit, the lower his BABIP. The only player who hit more than 45% of their batted balls in the air to have a BABIP over .300 was Jose Bautista, mainly because his fly balls generally left the park. 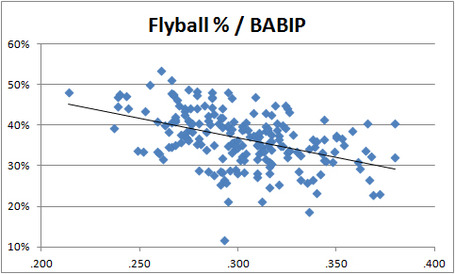 What I found interesting about this data was the perception it had for pitchers. Generally, when people are talking about successful pitchers, they mention how they are pitchers who induce more ground balls, but according to this data, if a pitcher is able to limit the number of home runs he gives up; he's more successful letting the batter hit it into the air. A good example of this is the Angels' own Jered Weaver. Last season, Weaver's fly ball rate was 48.6%, (0.1% above his career average), but since his home run rate was the lowest of his career, his season numbers were his best ever even though his line drive rate was the highest since 2008.

Finally, the third type of batted ball is the ground ball. On average, a batted ball will be hit on the ground 44.4% of the time compared to 36% for fly balls and 19.6% for line drives. 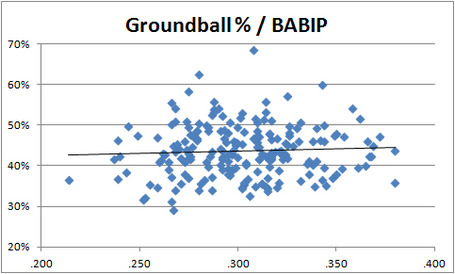 Those ground balls have almost no effect on a player's BABIP, unless he is blessed with exceptional speed or exceptional luck. Players who frequently hit the ball on the ground typically have higher than average BABIP, not because they hit grounders, but because they keep the ball out of the air. Seven of the top 10 ground ball hitters have BABIP over .300 while none have a fly ball rate higher than 29%.

The next time you're in conversation about batted balls, remember this; line drives-good, fly balls-bad. ground balls-who cares.