"Well some people sing, it sounds like they're screaming. Used to doubt it, but now I believe it."-Arcade Fire, "Month of May".

Jerome Williams came to work on May Day, taking the opportunity and promise of a new month to deal a gem against the Twins. Backed by the ferocious Torii Hunter, Williams got a complete game shutout and staked further claim to his role as fifth starter of this 2012 Angels squad. If there were any doubts in my mind, Jerome did a fairly good job at crushing them tonight. But the team, for seemingly the first time this season, has a few things to believe in at the moment. Things like winning a series, Mike Trout's speed and spark, Torii Hunter's offensive awakening and an excellent pitching performance that gave the thin home crowd something to rage about.

The only strike Jerome Williams seemed to care about today were the ones he got past the confused Twins lineup. 6 strikeouts through 9 innings pitched is good enough, but also factor in that at one point towards the end of the game, Williams had retired 12 batters in a row. The Pink Puka pitcher even looked surprised that he was pitching so well, but by the end of the game, I saw a confidence in his body language that will go far in erasing his demoralizing 2012 debut in Yankee stadium a few weeks ago. This game belonged to him.

Torii Hunter is also making me swallow a few words I had for him recently. The aging right fielder, with his solo shot to left center tonight, now has four homeruns on the season. He added another run to the board with a clutch single with men on 2nd and 3rd, after another Angel *coughPujolscough* couldn't get the job done. Back to his solo shot though, he wasn't to be outdone, as two batters later Howie Kendrick parked one in almost the same spot. Howie would've given Jerome Williams a tough run for POTG had his hit in the bottom of the fourth gone out...but it missed by THAT much, and ended up being a controversial play due to what appeared to be fan interference. I didn't have that great of a view from my spot on the couch, but perhaps Yeswecan and Rev Halofan could give us their thoughts as to what the call should have been: 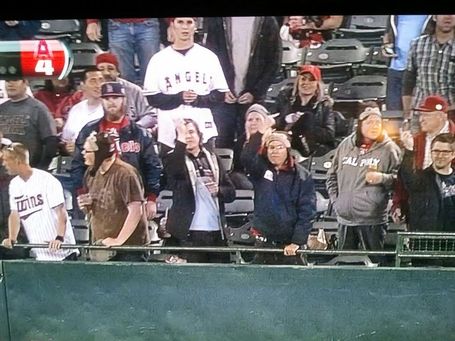 (That's them waving their index fingers in a circular fashion, by the way...not giving the middle finger salute)

Albert Pujols had an RBI, but it was about as lackluster as an RBI can get, coming off of a high bouncer fielders choice. In every other at bat, it was business as usual: groundout, fly ball, groundout. Yawn. Albert is even swinging on 3-0 junk to cause some of these outs. He's not looking good.

But one other Angel that looked good was Mike Trout. He got a hit out of a beautifully placed bunt down the third base line, but then also got to show off some leg by grabbing his first stolen base of the season. Again, this is the sort of thing that however small, is a spark. As The Boss says, "You can't start a fire without a spark." He's looking good at the plate, taking pitches where he should be, and for that alone I think we can get excited.

There haven't been too many bright spots in this season. Hopefully the team is in some sort of reverse version of the Rat Pack classic "That's Life", in which they are shot down in April and ridin' high in May(don't ask me what will happen in June). But for now, in the drizzly cold of the new month, we have one game played. One helluva gem by Jerome Williams. Two homeruns. 4 runs. Two wins in a row. Things could be turning around, which is reason enough to dance around the May Pole tonight.