What?!? You thought that just because this was baseball's dead news period I was not going to be able to dogpile on tidbit after tidbit?? Silly Halo Fan....

Well, here we are. The launch of "The Second Half" begins today. And it comes right on the very playing field of worship that so consumes the Bellicose Butt-hurt Bunch of Bristol. Most of the North East media types are still licking their wounds over the audacity of the small-market faithful to boo anyone who has been aggrandized by the small, but overly-powerful, fan club of pea-brained MSM talking heads and enshrined into their very own Pantheon of Baseball Hype. I mean no offense to Robinson Cano, who really is a very fine player. No, this is only about the extended reactions of Simpering Fools of Fatuousness who, so Self-Importantly, have failed to listen to the 98% of their own sporting community over the past few decades and understand that baseball greatness is not preserved for pinstripes alone.

Their eternal excuse in support of playing favorites on behalf of their personal targets of adulation from childhood, or extended laziness to actually study and research activities beyond the comfort of their own personal time zones, is that they are merely giving their audience what that audience wants. And they back up that argument with ratings numbers. To which we should all, ALWAYS, respond as immediately and as forcefully as possible: "you have a fiduciary duty to GROW your audience! You have the access and the authority, so get your lazy ass out there AND LEAD!"

(By the way, after reading enough of the backlash in support of Cano spewing out of the Yankee camp, I have come up with a parallel to Godwin's Law. I shall call mine "Stirrup's Law". Why not? It's catchy enough! It states: "As any Internet discussion concerning the Yankees grows longer, the probability of a Yankee fan claiming superiority through The Luxury Tax paid out by the New York Yankees approaches 1." This supercilious position completely ignores the primal fact that small market teams would not need a payment from the luxury tax if the Yankees were not driving the salary market in the first place.)

So here we are, in Yankee Stadium to begin our drive to the 2012 finish line. 4 games back at the start of the day, Texas starts having to face a lot more stiff competition between now and September, including a lot of the Angels. We don't have it any easier, but Championships are things that must be earned and now is the chance to get it done. April and early May no longer mean anything. If everything works out well, this weekend spent in the Bronx could very well be the preview of the 2012 ALCS. Let's see of we still stack up well as Yankee Killers!

Crazy Laws Of New York: It is illegal for a woman to be on the street wearing "body hugging clothing" ...BUT... women may go topless in public, providing it is not being used as a business...........Over in Ocean City, though, a double standard persists inasmuch as men are prohibited from going topless on the boardwalk, or in the center of town...........But lookout, guys, because a fine of $25 can be levied for flirting, so make sure that you ignore those topless women...........The penalty for jumping off a building is death...........Married couples cannot dissolve a marriage for irreconcilable differences, unless they both agree to it...........While riding in an elevator, one must talk to no one, and fold his/her hands while looking toward the door...........Back in Ocean City, eating while swimming in the ocean is prohibited..........Hamburger may not be sold raw, perhaps explaining the fascination with hot dogs..........Pinball machines cannot be played on Sundays...........And slurping one's soup is against the law....................Meanwhile, returning to NYC, you need a permit to transport carbonated beverages..........Donkeys are not allowed to sleep in bathtubs..........A man can’t go outside while wearing a jacket and pants that do not match...........It’s illegal to have a puppet show in your window and a violation can land you in jail for 30 days..........It is against the law to throw a ball at someone’s head for fun (unless they are wearing a Yankee uniform, presumably).

Mike Trout: The National Media, apparently still unwilling to commit their own resources to learning about Trout and reporting on him to baseball fans everywhere, have at least gone to the trouble of picking up local articles and broadcasting them around. Here they make the day of Bill Plunkett of the OC Register. This column showed up lots of places.

Jered Weaver: Scribes, in this instance Cliff Corcoran of Sports Illustrated, are finding it more and more difficult to justify not having Weaver at the top of their Cy Young conversations. I really wish some consideration would be made for the lack of quality opposition in Chris Sale's excellent season to date. And he caught LAA, LAD, TBR and DET all during prolonged slumps.

Zack Greinke: As Angelsrthebest101 posted a few days ago, it is now being reported that the Halos are in the discussions for Zack Greinke. (Ignore the unnecessary fluff that comes from the official mouthpiece. Even if it turns out to be true, it serves no worthy purposes among negotiators.) Fortunately for all interested parties of a serious nature, we can do a lot better than Jon Heyman. Carson Cistulli over at Fangraphs gives us a tad more beef on this particular burger.

eBay Auction Find Of The Week: Vintage Bobble Head Nodder California Angels Includes original box. This is the warm, quaint, throwback style of celebrating our favorite team. Without forcing upon us the detail of explicit personal identification empowered by modern technology.

MORE AWESOME STUFF AND PLENTY TO DO AFTER THE JUMP!

Well, everybody is certainly well rested, most perhaps "rusty". On the surface, that Williams/Garcia match-up on Saturday looks pretty promising in terms of offense what with Garcia's high ERA and him recently being pulled out of the Yankee bullpen. Do not be confused. Lifetime, Garcia is 15-3 against the Halos with a 2.36 ERA and 136 K's. Aybar, Kendrick and Hunter all do like to feast on Garcia, FWIW. Nova, on the other hand, as Sunday's pitcher carries a 5.11 ERA against the Halos.

Final Take on the ASG: Deadspin has a perfect take on the latest news coming out of the MLB Home Office. Bud Selig is setting aside any effort on instant replay, because he obviously has to dedicate so much time taking the remaining joy out of the Home Run Derby and render it safe for New Yorkers everywhere.

The Nats sure have themselves in a pickle: Here they are in the lead of a pennant race, closing in on a playoff appearance and that "anything can happen once you get to the playoffs" moment, and yet have taken a public stance to shut down their ace starter, Stephen Strasburg, to protect his arm and future career. We all know about it, but apparently it's supposed to be a secret, so nobody tell Strasburg, Ok? Now, I took a look at this. Here you got a Scott Boras client in the final year of a 4 year deal but he is actually on the hook through 2016. He has given you 192 innings total to date on that contract, but can carry a 2.69 NL ERA into free agency. Should the Nats really be doing all they can sacrifice their 2012 World Series shot in order to ensure that Strasburg shows up healthy and strong when he reports to camp for the MFY in 2017 (discounting the Super Two possibilities that might accelerate that time frame)?

Hanley Ramirez: I have pointed out this fun site before, but I missed the recent achievement of Ramirez to lay claim to the most egotistical home run trot time of the season, taking 30.3 seconds to round the basepath. One wonders how many times Peter Bourjos could negotiate that same circuit in that number of seconds?

Minor League Promo For All Eternity: Here is a new one. The St. Paul Saints are renaming themselves for one night to the "Aints" and being sponsored by the Minnesota Atheists Society. One must presume that the official mascot of the evening shall be The Flying Spaghetti Monster. I do wonder, since the truth is not for us to know, whether or not a rejection of faith is not, of itself, an act of faith. If so, must the Aints forfeit this contest to themselves out of respect for the logic of their sponsors? And, whether they do or do not, must not the score be Infinity to Nothing regardless?

1.The History of Wrigley Field, Los Angeles (birthplace of the LA Angels of Anaheim)

2.The Lyman Bostock Story, Part 1 and Part 2 (13 minutes of video, reminding us all to enjoy greatness while we have it.)

3. RIOT Baseball Season Tracking (A computational "magic number" for the baseball playoff race, which started in UC-Berkeley's Industrial Engineering and Operations Research department and has since moved to SMU. For example, as of right now the Halos must win 12 more games to avoid elimination from the playoffs.)

Ryan Reyburn of the Detroit Tigers: gets his arm stuck in the wall chasing a home run..........Reginald Jackson: backpedals on the truth in order to get reinstated at the Yankee buffet..........Trade Bait: The Angels are found to have a rather bare cupboard still if they have hopes to break big before the trade deadline..........Fun CBA Twist: trying to finagle the new CBA rules turned lying about age in the Dominican Republic upside down, with the Rangers catching a slight break..........Strikeouts Suck: Or...so says Nats pitching coach Steve McCatty.

Saturday, July 14th, is Summerfest - MBYP's 2nd Annual Beer & Music Festival. From 3:00pm to 6:00pm. "Live music, 30 breweries, a home brewers contest, food trucks, local restaurants, and a raffle for charity. Proceeds will benefit the Manhattan Beach Chamber of Commerce and the P.S. I Love You Foundation. Free small bites from local restaurants during the first hour (3:00 - 4:00pm only)." 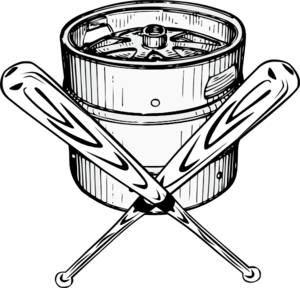