They Did Build It, And People Still Come

Share All sharing options for: They Did Build It, And People Still Come

"Ray, people will come Ray. They'll come to Iowa for reasons they can't even fathom. They'll turn up your driveway not knowing for sure why they're doing it. They'll arrive at your door as innocent as children, longing for the past. "

When James Earl Jones spoke these lines in 1989, little did people know his words were more prophesy than simply lines from a script. Although it's been 23 years since a few acres of corn on a farm in Dyersville Iowa was transformed into a "Field of Dreams", people are still making the pilgrimage to visit the movie site and "dip themselves in magic waters". The movie, but more importantly, the feelings the film stirs within us has created a location where baseball fans can go to connect with the past. Of summer days playing ballgames and moments when fathers and sons bonded with a game of catch. 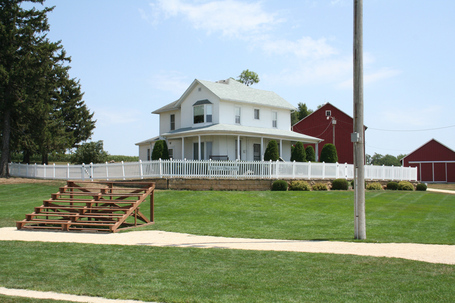 This particular site was chosen because it was situated where there were no other farms within sight, and it had a parcel of land flat enough to place a baseball field. Part of the charm of the film site is how perfect the farm and surrounding area matches the experience of the movie. For some reason I always thought of Iowa as a flat boring state, but was proved wrong by how much of the area is filled with gently rolling hills covered with corn stalks and rocky bluffs that rise out of nowhere. The easy scenery makes driving to the field relaxing and you're sure to get chills when you see the lights of the field as you approach the farm. But nothing matches the joy you feel when you walk onto the field. 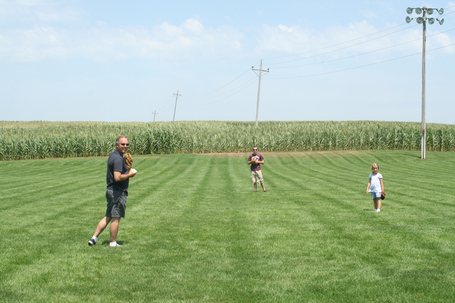 "Of course, we won't mind if you look around, you'll say. It's only $20 per person. They'll pass over the money without even thinking about it: for it is money they have and peace they lack. And they'll walk out to the bleachers; sit in shirtsleeves on a perfect afternoon. They'll find they have reserved seats somewhere along one of the baselines, where they sat when they were children and cheered their heroes. And they'll watch the game and it'll be as if they dipped themselves in magic waters. The memories will be so thick they'll have to brush them away from their faces."

It doesn't cost $20 to enjoy the movie site. In a world where it seems like everyone is out to make a buck, the owners of the field have generously decided not to charge visitors to sit on the bleachers, run the bases, play a game of catch, or sit and watch the game. They don't reserve or rent out the field for organized activities to ensure it is accessible to anyone who visits. This means you're guaranteed the opportunity to live your dream each time you're there. 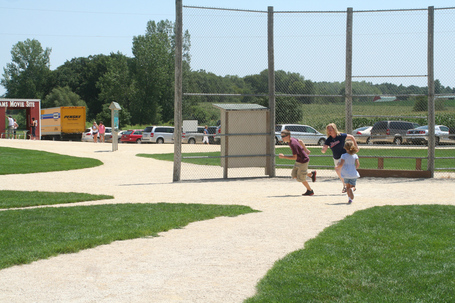 "The one constant through all the years, Ray, has been baseball. America has rolled by like an army of steamrollers. It has been erased like a blackboard, rebuilt and erased again. But baseball has marked the time."

It was 20 years ago that I made my first trip to see where my favorite movie had been filmed. Like most people, a lot has changed in my life over the past 2 decades; a couple of marriages and their corresponding divorces. Kids being born, graduating, and themselves getting married and having kids. And the loss of my parents. With all of the changes that happen in life, baseball has truly been one of the constants I've relied on, and as we pulled into the parking lot last week, it was nice to see how little had changed at the movie site. Sure, there was now a fence around the house to discourage people from walking up and disturbing the family who live there. And the small trailer that housed the souvenir stand was replaced with an actual building, but the important parts, The Field, the wooden bleachers, and the corn were still the same. 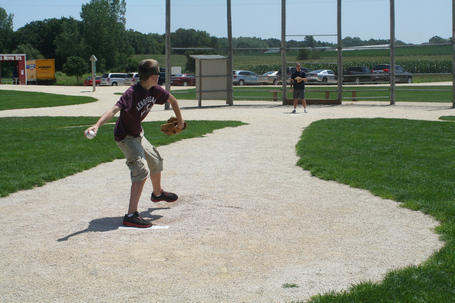 Although it was easily 100 degrees, my son and I made sure we played catch. Actually we played twice, once in the outfield and then later when he wanted to throw from the mound. We walked into the corn, but no one disappeared. 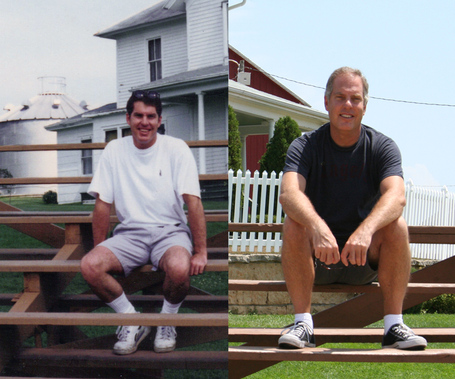 During my first visit to the field, there was only one other carload of people, but this trip saw at least a dozen cars filled with people who, 23 years later, still wanted to see the location and feel the magic. Twenty-three years have passed, and yet the desire to walk among the ghosts of baseball past is still strong within many people. At least I know it is with me.

"This field, this game: it's a part of our past, Ray. It reminds of us of all that once was good and it could be again. Oh... people will come Ray. People will most definitely come."