Sorry 5thStarter, but the Dan Haren Unfortunate Wheel Of Destiny was spun again last night and, after three straight jackpots, it came back up big time craps for the second spin in a row (lasting only 3.1 innings and then 3.2 innings). This, we do not need. It's starting to feel like Jeff Weaver Version 2006 all over again. At least, this time, we don't have some young stud languishing in the minors who might prove effective, or anything. Do we? Huh? In Haren's defense, as if any defense is possible, is that the 4 runs he surrendered in the 4th (and/or the 2 runs Williams gave up in the 5th) were all superfluous. With this pathetic offensive showing of consecutive 000000000's, once that I-Give-Up-A-Home-Run-Every-Game moment came early from from Haren (in the 2nd), the match was out of reach. David Price is awesome, but he should have been good for a run or two from any average team.

Well, I could go on and extend the misery, rehashing it all and everything, but JeffJoiner pretty much nailed it in the game thread last night.

"I have too much crap going on to watch incompetent management and underperforming lazy asses who dont care. Driving by a crew of CalTrans guys on cell phones every morning is enough of that already...Life is too short to give this game my undivided attention."

And it's Friday morning. We got a weekend of baseball to watch. It's going to be awesome and a lot more fun than, say, January, so heck yeah!!

First Pitch: This being "Anniversary Week" celebrating the 10 year Anniversary of the Angels 2002 World Series victory, World Series MVP Troy Glaus will be throwing out the honorary first pitch prior to tonight's contest.

Field & Stream: Deadspin points out, in their weekly EastSPiN monitoring, that the DwightMare remora at our favorite World-Wide Lag-Behind in Sports have finally looked away from the NBA and caught up on the Mike Trout story. And here I was thinking Trout was slumping significantly.

Mike Trout Hagiography, Chapter 2,916 - Here is the kind of thing that most fans and media are missing out on entirely, because it doesn't jump out of the box scores and stat lines. In Thursday's game, 2nd inning, Trout came up to the plate with one out and runners at 2nd and 3rd. In typical Halo fashion, he chops the first pitch he sees into a grounder to 3B. Normally this should be a rally killing GIDP to end the inning. But unlike most any other player in baseball, Trout used his blazing speed to blow up that DP and extend the inning. Then he used that same speed to blow up the infield, stealing second easily and getting a run across by forcing TWO errors on the nowhere-even-close play at second. Trout ends up at third base, and eventually jogs home on Aybar's triple. Those two runs, #'s 4 and 5, can be added to the Mike Trout Rookie Legacy.

Beyond Belief: From the Official Angels team Game Notes before last night's game, we learn that in the 66 games since the start of June, the Halos lead ALL OF MAJOR LEAGUE BASEBALL in batting average, On Base Percentage, Runs Per 9 innings, and Slugging Percentage, while coming in second overall in home runs.

Erick Aybar: Admiral should come off of the DL far more often. Including his 0'fer last night, he is still batting .368 since returning to the lineup.

Steven Geltz: Why? Somebody please explain. Even his player page on the team sight is a vacant parking lot.

eBay Auction of the Week: 1992 Chris Cron Baseball Card. Of course you have heard of CJ Cron, but how many of you knew that his dad played first base for the California Angels? This could be your chance to have dad's autographed card today, and CJ's autographed card in the near future!

ALL THE FUN STUFF AND THINGS TO DO AFTER THE JUMP...

LIVE MUSIC IN THE GARDEN AT ANGEL STADIUM

I dunno. I just got me one of them feelings that this is going to be a very good weekend for our starters, and one of those weekends where we get to see Joe Maddon get tossed for arguing out of frustration how very good a weekend our starters will be having (well, he would have, except that he just got that out of his system). It's stupid for me to be doing this previews, really. My accuracy rate is about as reliable as Congress. Well, that's not true. You can always count on Congress to be reliably unreliable. But my predictions are just as worthless, anyway. I mean, hell, I couldn't even get my predictions last week as wrong as I have gotten them wrong all year. And I could be wrong about even that.

Other extra-sensory perceptions for the weekend: Trout is going to heat back up. Trumbo is going to have one awesome game, but only one. Callaspo is going to hit more homers than Pujols. Aybar will get exactly 5 more hits than he commits errors in the field. Frieri will be perfect. Takahashi will also be perfect, but only if he does not get into any game. Morales will be panther. And Bourjos will come back off of the milk carton. Iannettta, Hunter, Howie and Sosh all remain cloudy to me, which probably means they will be the biggest stories come Monday. See you all then!

This Date In Baseball History: 1920 - Ray Chapman of the Cleveland Indians becomes the only fatality in history after he dies from being struck by a pitch..........1947 - Massachusetts baseball fans show their true color when only 85 fans show up to see the minor league Lowell Orphans play a double header. Having already been forced to move once, Lawrance, Mass. evicts the Orphans because they suck (after being renamed to the Lawrence Millionaires)..........1948 - Babe Ruth lies in state at Yankee Stadium after passing away the day before..........1971 - Richard Nixon invites the Oakland A's to the White House in order to meet Vida Blue...........1973 - Willie Mays hits his final home run of his career, number 660..........1986 - Pete Rose makes his final appearance as a player..........2001 - Jeff Frye of the Blue Jays opts to park at first base after hitting an easy double, so that he can lay claim to the cycle..........2003 - The Pirates hand out bobblehead dolls of the comic strip character Charlie Brown..........and The Rally Monkey is honored with its own bobblehead...........2008 - R.A. Dickey throws 4 wild pitches in the fifth inning AND Kenji Johjima adds a passed ball, setting an MLB record for battery upchucks in one inning.

Baseball Be Beddy Beddy Dangerous: Tipped off by Deadspin, over here is a pretty decent study showing that professional baseball player tend to have a significantly higher mortality rate than professional football players: 15.9 percent versus 12.8 percent. And, according to the table shown in the article, we cannot blame this on Phil Neikro's girth.

Disturbing Trend Continues: Umpire pissiness recently extended into the dugouts again, which was disturbing enough when it happened once. The news from yesterday is that is that it happened again during the Dodgers Pirates game when the plate ump Angel Campos became so edgy that he chased Matt Kemp for having the audacity to root for his teammate after being instructed to speak no more.

Let's Switch To The Lighter Side: Here is a great list. The 50 Best Nicknames in Baseball. Not so much because the names are highly imaginative or LOL (I see much more talent here on HH on a daily basis). Nope, it's more about how "Archie and Jughead" those names are, speaking to a certain innocence in a distant culture. People really did use those nicknames for those guys, in real life and on a daily basis. And they were grown ups!

Manager Of The Year, AL Style: Dayn Perry over at CBS Sports begins the national dialog concerning Best Skippers. On the AL ledger we see our weekend guest and erstwhile Halo, Joe Maddon. Perry makes a run at Bobby Valentine for Manager Most Capable of Defying Expectations. I am certain there are folks here who would argue against Bobby V's consideration, having a superior candidate of your own. While you are there, you might want to check out his takes on AL MVP, AL Cy Young, and AL Rookie Of The Year. And browse the comments for some amazing idiocy. I mean really, some of these people own wallets that baseball needs to stay afloat. Just scary. I did laugh at the comment about granting Trout the AL CY for his brilliant defense behind Weaver.

Yankee Entitlement: Speaking of Dayn Perry, his is one of he gentler slams of John Harper of the NY Daily News for the inevitable imperious demand that the Seattle Mariners hand over Perfect Game Pitcher Felix Hernandez.

In all Seriousness: I do honestly feel for the family that lost a loved one who suffered a fatal heart attack during a Toronto Blue Jays game. But I do confess that if I had to create a bucket list places where I might spend my final breaths as a mortal, a baseball park would be on that list.

Not All Baseball Players Are Whimps: Yes, in this video we shall witness Brandon Inge dislocating his shoulder while diving to field a shot up the third base line, then he resets his shoulder himself, then he shakes the whole thing off, then he gets the go-ahead hit in the A's win during the very next at-bat. Wow.

(Japanese video fest, so be careful at work!)

1) Crazy Japanese Pitch (And we think OUR umpires are bad?!?)

2) Crazy Japanese Spiderman Catch (And we think OUR Center Fielder is an awesome defender?!?)

3) Crazy Japanese Human Pinball (And we thought OUR infield drills were state of the art?!?)

4) Crazy Japanese Superhero Baseball (And we thought the Gyro-ball was special?!?)

Greg "Spike" Gibson - is Ok after trying to take out Torii Hunter's cleats with his face the other night, just in case you were wondering..........Uganda LIttle League - reaches the LL World Series in Williamsport. Know again the joy of baseball, my friends...........Japan Sends Godzilla - let's hope Uganda does not have to open their LLWS experience against Japan and their 6-0, 200 pound "kid"..........Chicks Dig The Foul Ball - some guys have all the moves. Either that, or ladies still adore their men in uniform. And she's a keeper, too! Notice that she hangs on to her beer.........

And now, speaking of beer, being the full service weekend linkage institution that we are, here is the obligatory moment we take out of each Friday for beer:

For our Northern California community (as written from the perspective of Rosarito Beach!), Friday and Saturday sees the Stone 16th Anniversary Celebration Brewers Reception up in San Marcos. The event will be held at Cal State San Marcos..........We of the SoCal contingent with any thirst should head over to Alhambra on Saturday for the Alcazaba summer bottle share. This runs from 10am to 6pm at the Alcazaba Gallery. 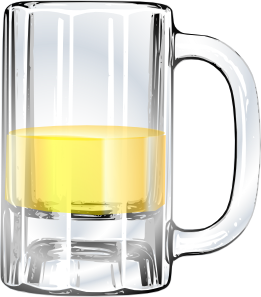