I don't know what's going on, but today's links are frickin' WEIRD. Check it out...

Share All sharing options for: Thursday Halolinks: Normal Font, Not So Normal Links

Look out below! The regular font is back, but at the cost of those cute little dots separating each link story. This means you're on your own in identifying where one link ends and where the next one starts. I know, life is rough. Ladies and gentlemen, today's Halolinks:

If I were a real member of the baseball press, I'd be PISSED! Who do the Angels think they are taking away the best seats in the house?!? Don't they understand that without the support of the mainstream media and local baseball writers their entire sport will crumble? Just look at how us outsiders almost wrecked the Hall of Fame! Angels move press box for new fan seating opportunity - angels.com. "With the move, the Angels will join the White Sox as the only Major League club to not have its press box located in the vicinity behind home plate...In turn, the Angels spent nearly $1 million converting the Club Level near Section 343 into a new press box and dining-room area, which will be located about 200 feet from home plate. The radio and television broadcast booths, located one level above from the old press box, will remain in place." Here's a tip for the Angels front office to make this transition go smoother; install a soft-serve ice cream thingy in the new pressbox. Apparently, baseball hacks love to talk about their food, probably even more than they like baseball, and everyone loves ice cream.

Compensation? Awesome! Angels working to let pitcher Jo-Jo Reyes out of contract - angels.com. "the Angels and Reyes' representation were finalizing parallel negotiations with SK that would get him to play for a more lucrative contract in the Far East and would bring the Halos compensation." I vote for this compensation.

Look at that, the Angels are on this list twice! ESPN releases its Sunday Night Baseball schedule - HardballTalk. "With only 11 games — and with the obvious ratings maximization incentives in play — one cannot expect every team to be featured on Sunday night."

Stop the presses! Trade alert! Mariners acquire Mike Morse in three-teamer with Nationals, A's - CBSSports.com. "The Mariners have agreed to a three-team trade that will send outfielder/first baseman Mike Morse to Seattle, according to CBSSports.com baseball insider Jon Heyman. The Nationals will receive right-handed pitching prospects A.J. Cole and Blake Treinen along with a player to be named later from the A's, according to CBSSports.com baseball insider Danny Knobler. As part of the deal, the A's will receive catcher John Jaso from the Mariners. " Yeah, big happenings in baseball. SBN's Daily Dish made a funny: Breakfast Links: Mike Morse, Matt Harrison, Buck Showalter - MLB Daily Dish. ""We've added to what we think could be a pretty good middle of the lineup there with Michael, Kendrys Morales, and Raul [Ibanez] and Jason Bay." When you use "middle of the lineup" and "Raul Ibanez and Jason Bay" in the same sentence, and it's the year 2013, and there's no negation anywhere to be found between the two phrases, you may want to start sending your resume around." FanGraphs' (and USS Mariner alum) Dave Cameron doesn't like losing Jaso: Appreciating John Jaso - FanGraphs Baseball. "If Jaso just regresses back to his career averages, he’ll be a good offensive performer. If any of Jaso’s improvement from 2012 held, he’d be one of the better hitters in the American League. Oh, yeah, and he can catch." Your decent hitting catcher got traded away? Count your blessings he wasn't dealt for $63M of suck.

Since the A's acquired Jaso, they don't need Kottaras: A's Designate George Kottaras For Assignment - MLBTradeRumors.com. "Kottaras was acquired in July from the Brewers and hit .212/.280/.471 in 93 PAs as an Athletic, giving him a total slash line of .211/.351/.415 in 209 plate appearances for the 2012 season. " For some reason I've always liked Kottaras. It might possibly be that .351 OBP. Oh wait, that was only for one season. Never mind.

Hey look, Tom Brady found Fido! This will be the funniest thing you'll see this week:

Alex Rodriguez had hip surgery - HardballTalk. "Alex Rodriguez had his long-awaited hip surgery today. And the doctors said afterward that the surgery was a horrible disaster. had to remove the hip and replace it with a piece of ivory and fit Rodriguez with special brace that will cause him excruciating pain for the rest of his days. Haha, just kidding. It was a success." Damn, for a second there, this was the best day ever.

This will be the funniest thing you'll see this week (part 2): 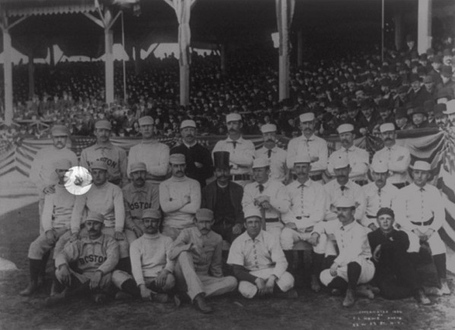 Forget the finger, how'd they get that light to hover over that guy's hand like that?

No, it's not just you who feels that way:

Bryce Harper, budding douche superhero - SBNation.com. "As seen in the .GIF above, from his appearance on Jimmy Kimmel Tuesday night, there are still plenty of opportunities for Bryce's inner douche to shine."

And speaking of Bryce Harper...

Sure, Adam Jones is a star. But how starry, exactly? - Baseball Nation. "As it happens, when I consider all the lists, here's how the top five center fielders look to me: 1. Andrew McCutchen 2. Bryce Harper 3. Austin Jackson 4. Matt Kemp 5. Jacoby Ellsbury ... with Bourn and Jones battling for the No. 6 slot, and me closer to Bill James than Bill Ripken (yes, stop the presses for that one). I should mention that I'm considering defense. If I didn't, Kemp and Jones would rate slightly better, and Jackson somewhat worse. But the last time I checked, a run saved on defense counted exactly the same as a run produced on offense. It's funny, how often the experts forget about this."

And speaking of Matt Kemp...

Matt Kemp Now Has A Massive Tattoo Of His Grandparents On His Chest. "The Dodgers' outfielder got the custom ink to pay tribute to his grandparents, Doris and the late Vernon Mukes." 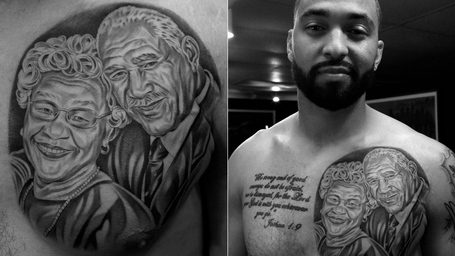 I wonder if Kemp's granny knows she has a nipple growing on her shoulder?

"It's a goddamn freak show out there!" Enjoy your day.