As the MLB's blackout policy works its way through the court system, the Phillies' new signing means Vernon Wells has one less landing spot.

"When was the last time you were decently kissed? I mean, truly, truly, good and kissed?" While you're thinking that over, here are today's Halolinks:

I'm really surprised this story hasn't gotten much coverage as it has the potential to snowball into something much more than just broadcasting and blackouts: MLB Blackout Policy Under Attack In The Courts - FanGraphs Baseball. "MLB did try to have the case tossed out soon after it was filed. But the presiding judge — U.S. District Judge Shira Scheindlin in New York — rejected those arguments and found the plaintiffs had stated plausible antitrust claims." I'm all for removing MLB's ridiculous blackout policy, especially since I rely on MLB.tv for 98% of my baseball viewing, but the bigger issue is baseball's anti-trust status coming under scrutiny. I doubt the lords of the game will allow this suit to go to court and risk having their status looked at too closely. Prediction: No more blackouts by 2014.

I am glad for many things, and one of them is that I'm not a Phillies fan: Glove story? Phillies sign Delmon Young - USAToday. "The former Detroit outfielder and mostly DH signed a one-year, $750,000 contract with the Phillies today. The contract also includes undisclosed performance incentives." Sure, $750K isn't much relative to baseball contracts, but does Ruben Amaro think Young is better than one of his players in Triple-A? Anyway, you know what really pisses me off? Amaro was probably the only GM dumb enough to acquire Vern:

This is the one realistically available player I wish the Halos were able to acquire: Padres rumors: Chase Headley, Justin Upton trade 'not happening' - MLB Daily Dish. "Talks involving Headley haven’t gotten quite that serious, as far as has been reported, but Rosenthal says the Padres "eventually figure to move" the third baseman. The 28-year-old is two years away from free agency and is asking for $10.3 million in arbitration this winter." Headley is just about a perfect fit for the Angels.

Ladies, I've got some bad news for you. Mike Napoli has a condition that interrupts the blood flow to his bone. Yes, it's true, the blue-haired hotties of Boston will have to work a little harder: Mike Napoli has avascular necrosis in his hips - CBSSports.com. "It turns out that Napoli has avascular necrosis in both hips. AVN is a degenerative condition where bone tissue dies due to lack of blood supply. According to mayoclinic.com, "blood flow to a section of bone can be interrupted if the bone is fractured or the joint becomes dislocated."

I don't think they think this means what they think it means...ya think? 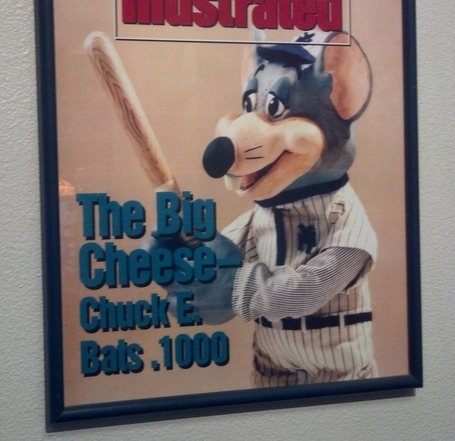 Here are a couple of stat-dense articles you to reflect and ponder: Calling Balls and Strikes Against Catchers (and Pitchers) - FanGraphs Baseball. "Catchers have still been given slightly more generous strike zones while batting, but the difference is smaller than it looked last Friday night, and catchers come out looking the same here as third basemen." Tommy John Surgery and Pitch Movement, Part I - Beyond the Box Score. "In his curveball discussion, he gives a good visualization of the change in run value versus movement in a series of graphs. From these graphs we can see some areas where the slope is quite steep, suggesting that a delta of an inch of movement can actually make a noticeable different in pitch results. " Angel fans might find the second post interesting as it relates to newly-signed Ryan Madson.

I see these posts and can't help but to be thankful that the Angels' don't have a rookie whose haircuts are big news: Bryce Harper cuts mohawk for awards show - Yahoo! Sports. "Apparently, the 2012 NL Rookie of the Year decided that "Jimmy Kimmel Live" was one thing, but the BBWAA awards was another. So Harper made an adult decision and got his dome coiffed like a boss for the presentation of the Jackie Robinson Award." If you follow the link, notice the guy doing the cutting is wearing a Red Sox cap. Would you trust anyone wearing a Sox cap with something sharp...near your head?

Looks like it's pretty much a done deal, but what I want to know is, what are they going to name this new Dodgers' channel? Dodgers, Time Warner Cable have a deal - latimes.com. "The Dodgers’ deal is expected to be finalized and announced Thursday. The team has not yet submitted the deal to Major League Baseball for approval, but the control of the channel is expected to rest with the Dodgers’ owners rather than with Time Warner."

Dave Cameron gives a few pointers for those of you lucky enough to be travelling to Arizona this spring: Arizona Spring Training Advice - FanGraphs Baseball. "I’ve found the overall experience to be more enjoyable if you stay in a more central location and then drive to the stadiums, rather than staying near the stadiums and then driving away from those areas when it comes time to do something besides watch baseball. If you want to spend the entire day at the ballpark on the back fields watching prospects, then there’s probably an advantage to staying close to the ballpark, but if you’re just going for the Cactus League game itself, you’re only going to be at the park for about 16% of your day, so the rest of it may very well be more enjoyable if you are staying in an interesting neighborhood."

Sad photo of the Silverdome: The Silverdome Has Been Abandoned To The Elements. "Strong winds and snow in the last few days have ripped the inflatable dome apart, and no one's done anything to stop it."