A couple minor league rankings have the Angels farm system looking pretty weak, but Albert Pujols may be in the best shape of his life.

Share All sharing options for: Tuesday Halolinks: Angels' Minor League System Is Weak, But Albert Pujols Is A Wedge

Is it just me, or does this off-season seem to be draggggiiinnnnggggggg? Ho-hum, here's some Halolinks:

Eddie Bane, where are you?? Once strong, Los Angeles Angels of Anaheim's farm system needs restocking - angels.com. "In 2005, Baseball America awarded the Halos' Minor League talent with the No. 1 ranking in all of baseball. Now, thanks partly to that, the club's Major League roster is once again a championship contender -- but the organization's farm system is expected to finish dead last when the publication releases its 2013 list this March." Tony Reagins' trade for Vernon Wells gets the distinction of being his worst transaction as Angels GM, but his firing of Scouting Director Eddie Bane may actually be the most damaging move to the organization. Even SBN's minor league guru John Sickels has the Halo system in his bottom-5: 2013 Baseball Farm System Rankings - Minor League Ball. "Weaknesses: impact pitching, especially potential starting pitchers. Overall depth."

Those who saw Albert at Stan's funeral insist Pujols looks in best shape in years. A wedge.

Too bad he's not a pitcher...then he'd be a pitching wedge! Baa-dum-chiss! Thank you, I'll be here all week.

Wait, so what is it? Don't wedges need knees? Albert Pujols out of World Baseball Classic, according to report - ESPN Los Angeles. "The first baseman had arthroscopic surgery to clean up his right knee in October. His agent, Dan Lozano, told MLB.com earlier in January that Pujols planned to play if his knee was healthy."

Ernesto-time! Pujols out of WBC; Madson may not open season with Angels - latimes.com. "Dipoto also said that closer Ryan Madson, who signed a one-year, $3.5-million deal with the Angels after missing all of 2012 because of Tommy John surgery, will not pitch in exhibition games until mid-March, a schedule that could prevent the right-hander from opening the season with the team."

Really? Could F/X data create a new market inefficiency? - Beyond the Box Score. "With the increased usage of F/X technology at the pro-level (from the Majors to the Minors), teams could dramatically cut back on the need for pro scouting." It's comments like this that give saber guys a bad name and opens the conversation up to the old guard to respond with, "Why even play the games?" I think my strength, or niche is I embrace both thoughts. Numbers tell so much, but so does actually putting an eye on a player. To blend numbers with in-person accounting is the way to go, not reducing scouting because of a computer printout.

I'm not sure if this is behind their paywall, but it's pretty interesting: Overthinking It: Understanding the Umpire-Manager Arguments of 2012 - Baseball Prospectus. "I am an awful lip reader, so I couldn’t have made the attempt on my own. Fortunately, I had the help of longtime baseball blogger Evan Brunell, founder of the former Most Valuable Network, proprietor of Fire Brand of the American League, and President of the Massachusetts chapter of the Alexander Graham Bell Association for the Deaf and Hard of Hearing. (If you want to know whether he'll come to a party to help you spy on your ex-girlfriend, you can ask him @evanbrunell.) Together we combed the mlb.com video archives for managerial ejections from 2012 and picked out the ones that seemed easiest to decipher. Then Evan got to transcribing, with occasional assists or second opinions from friends."

Insane Person Garrett McNamara May Have Ridden A 100-Foot Wave 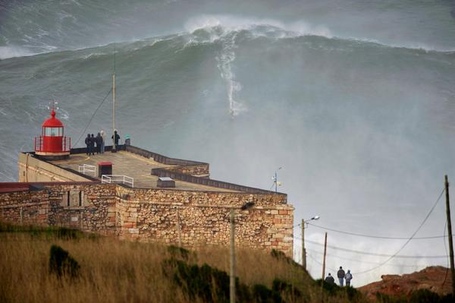 No more faking it: New MLB rule makes fake pickoff move a balk - Sporting News. "Under a rule change imposed by Major League Baseball, pitchers will no longer be allowed to fake a pickoff to third base and throw to first as a way to dupe a runner on first base into breaking for second." and of course Justin Verlander is whining about it: Detroit Tigers' Justin Verlander, Max Scherzer voice displeasure over change to fake pickoff move - MLive.com. "Proponents of the rule change argued the move slowed down the game, but Verlander wasn't buying it. "It happens once or twice a game. It might speed up the game by 15 seconds. Yay!" he said sarcastically. "Job well done."

Still hanging around: Yankees sign Juan Rivera to minor-league deal - MLB Daily Dish. "The Yankees currently sport three left-handed hitters in its starting outfield, so Rivera could provide insurance against southpaw pitchers. In his career, Rivera has hit .285/.332/.488 against left-handed pitchers, but last season, those rates were reduced to .260/.314/.433 in 138 plate appearances."

From a bat sniffer to some bat flippers: The Art Of The Japanese Bat Flip. "This video was put together by some unknown Japanese hero a year ago, but it's making the rounds today (I think it popped up first on Fangraphs last week). And that's 100 percent of the background on the video you're going to get."