News of spring training invites are filtering in, and the Angels have invited Bill Hall.

Share All sharing options for: Thursday Halolinks: Angels Invite Bill Hall To Camp, Everyone Is Happy

"Gentlemen, you can't fight in here! This is the war room!"

As Of Maicer and Men suggests in his latest post (Chone Figgins: Angels Acquisition #13), I'd rather the Angels do this type of deal with Chone Figgins: Angels sign Bill Hall to minor league deal - MLB Daily Dish. "The Angels could use Hall in case of injury to any of their outfielders or infielders. Hall has played all three outfield positions as well as third base, shortstop, and second base. It would be surprising to see Hall get very much time with the Angels, but there is the possibility that he gets called up at some point if he does not make the team right our spring training." There's a lot to be said about versatility, but what's the use if you suck?

You know who won't be getting this job? Me. Job Posting: Cubs Director of Research & Development - FanGraphs Baseball. "Description: This role will be responsible for developing and overseeing the research and analytics function within Baseball Operations, reporting to the Assistant GM."

You know who else won't be pitching in the WBC? Me. Andy Pettitte will not pitch in the World Baseball Classic - HardballTalk

You know who's not in this photo? This Photo Of Two Male 49ers Fans Making Out Is Awesome. ""You know why I love this picture so much?" I shouted from the living room last night to my boyfriend, a few hours after I showed it to him.
"'Cause they're so hot," he said.
Thanks pal. OK, fine, sure. But what else?
"Cause they're so hot and not faking it?"
So, obviously, it's great because it's a picture of gay sports fans." 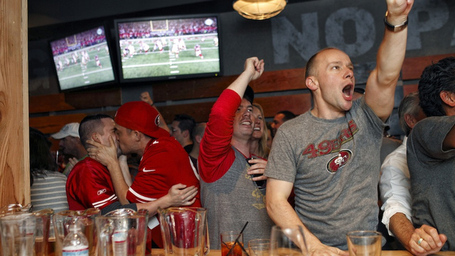 For some reason I thought of PhiSlamma and CommanderNate at the next Halos Heaven get together when I saw this photo. Not that there's anything wrong with it. (Photo linked from Deadspin)

You know who's a narrow-minded douche? 49ers Cornerback Chris Culliver Is Not Cool With Gay People. "I don't do the gay guys man. I don't do that. No, we don't got no gay people on the team, they gotta get up out of here if they do. Can't be with that sweet stuff. Nah…can't be…in the locker room man. Nah."

You know who sounds like a cool guy? Jered Weaver would support a gay teammate and other musings from the Robert Fick-Dmitri Young vodcast - Yahoo! Sports. ""If you’re hitting .300 with 40 and 140, bring ‘em on, you know? I think it would just be a shock at first, but it’s still your teammate in the long run. They worked just as hard as us to get up to where we’re at." Weaver also had a humorous comment on the new drug testing.
Jered Weaver: "They’re starting that new blood test this year, right at the beginning of the season."
Jeff Weaver: "You got popped. They came by your house."
Jered Weaver: "Yeah, I got tested for the first time this offseason. I didn’t know what to do. I got called and I was on my one-year anniversary in Europe and they’re trying to find me. It’s like jeez, dude, I can’t even take a dump without these guys trying to find me."

I also had this question in my mind, why would a team looking to rebuild trade away a player that supposedly was the type you'd want to rebuild around? These Questions Are Easier Than They Seem " - Baseball Nerd (Keith Olbermann).
"Why On Earth Did The Diamondbacks Trade Justin Upton?
This is the revised version of the question "Why On Earth Would The Diamondbacks Trade Justin Upton?" The two questions have been asked 47,552 times* this off-season on radio, tv, and the internet. Answer: In what is now a five-and-a-half season sample size, Justin Upton is a career .250 hitter with a .325 on base percentage and a .406 slug, and an average of 18 homers and 63 RBI. That’s what he’s done lifetime away from Phoenix (the homers and RBI are normalized to a 162-game season). He drove in exactly 20 runs on the road last year. He is a supremely talented prospect who has thus far shown he doesn’t travel well." Oh, I see. He's not very good.

But he's not left-handed! Mets To Sign LaTroy Hawkins - MLBTradeRumors.com. "If Hawkins makes the roster, the Mets will become the tenth team for which he's pitched at the Major League level. The Reynolds Sports Management client has a career 4.45 ERA, 6.0 K/9, 2.9 BB/9 and 47.8 percent ground-ball rate in 1303 2/3 innings."