The Halos say out with the old, and in with the new as three-fifths of the Angels rotation was either signed or traded for during the recent off-season.

Share All sharing options for: Wednesday Halolinks: Meet The New Starters, Better Than The Old Starters

Prove everyone wrong about what? And really, everyone? Los Angeles Angels: Can Hanson, Vargas and Blanton Prove Everyone Wrong? - Yahoo! Sports. "The Angels have five starters capable of throwing at least 170 innings -- no team in the American League matched that in the 2012 season. Hanson, Vargas and Blanton may not be considered Cy Young worthy, but it's a trio that can deliver innings and can give their team a chance to win with every start." If those three pitchers can keep their opponents under 5 runs, with the Angels offense, there's a good chance they'll come out on top. So, there's no proving anyone wrong about anything.

And besides, the club now has a "crafty" left-hander: New left-hander Jason Vargas 'beyond crafty' - FOX Sports. "Angels manager Mike Scioscia doesn't seem to be concerned that Vargas gave up 35 home runs in pitcher-friendly Safeco Field last season, tying him for the second-most allowed in the major leagues in 2012." You know why he's not concerned? Because the guy he replaced, Ervin Santana, gave up the most home runs (39) in the majors.

But what about his daily bread? Angels FYI: Josh Hamilton, who makes lots of dough, gives up bread - latimes.com. "Hamilton typically entered camp weighing between 245 and 255 pounds, but after playing summers in the stifling heat and humidity of Texas, he'd weigh about 225 by season's end. A more moderate climate in Anaheim should allow Hamilton to maintain a consistent weight."

Lean, mean, prayin' machine: Hamilton arrives at Angels camp lean and ready - angels.com. ""The Lord kept waking me up in the middle of the night over a month period, and I'd either have the Church Channel on or Daystar Television," Hamilton said. "And every time I'd wake up, there'd be a doctor on talking about what you put in your body -- how it makes you feel. Then, I woke up one night and the juice lady was on. I always prayed that the Lord would help me feel better and help my body, this and that. That's all great, but am I doing my part? That's kind of where I was like: 'All right, it's time to do my part.'"

Also within the above post is word on Albert Pujols' right knee. "He looks great," Scioscia said of Pujols. "He looks like he's in great shape. Naturally, we're going to try to pace him in with the offseason knee surgery, but we don't anticipate it being any problem. We have a lot more time this year, which we'll make sure we make good use of." And Ryan Madson underwent an MRI on his surgically repaired elbow yesterday. We'll probably find out Wednesday the results. The article states, "General manager Jerry Dipoto reported that the MRI is standard operating procedure for a player recovering from surgery and dealing with a temporary setback."

If for some reason the Angels think they could use Carp, the story would write itself: Mariners sign Saunders, designate Carp for assignment - Yahoo! Sports. "The Mariners finalized their one-year, $6.5 million deal with Saunders on Tuesday, and they designated outfielder/first baseman Mike Carp for assignment."

Here's an post looking at the "Sophomore Slump" and if Trout (and us fans) has anything to worry about: Angling for Trout - The Hardball Times. "Rookies within shouting distance of Mike Trout's numbers almost all fell, and pretty far, in their next years; rising so high leaves that much more room to fall. This set of comparisons bodes ill for expectations that he'll exceed his 2012 record—but there is a more promising one."

Last week I mentioned something about some software to colorize photos, here's a result: 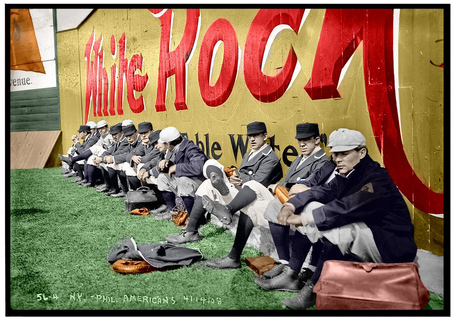 Well, we're excited you're excited! Walden excited to be with Braves - FOX Sports. "''So far, so good,'' Walden said Tuesday. ''I've only been here one day. It's a lot different than the Angels, but just the fact that the Braves traded a good pitcher to get me means a lot to me.''

When Bernard Malamud saw "The Natural" - Baseball Nation. The film's director was asked if Malamud had seen the movie, Levinson: "He did. I had heard that he went with his daughter to see the film. And she said afterwards, 'So Dad, what do you think?' And he said, 'At last, I'm an American writer.' And I thought, well, that's a great compliment."