The MRI results were good for Ryan Madson's elbow. Free agent pitcher Kyle Lohse is still available, should the Angels sign him?

Rex Fregosi gets my favorite person of the day award for posting all of his photos from Wednesday's workout at the Angels spring training facility (I stole on of his photos for this post). So, today's Halolinks are dedicated to him:

ESPN talked to C.J. Wilson, and Wilson gave the best quote so far this season (all 4 hours of it), "I'll tell you what is my fault, sucking in the second half." Video: C.J. Wilson offers his thoughts - ESPN Los Angeles. "C.J. Wilson talks about last year's struggles, Josh Hamilton's past conflicts, and what to expect from the Angels in 2013."

The results on Madson's MRI were negative, which is a positive, and Jeff Fletcher makes a good point about the situation: Madson may benefit from dropping opening day goal - The Orange County Register. "Although an MRI of Madson's surgically repaired elbow brought the relief that there was no structural damage to the joint, the Angels are still going to keep the pitcher from throwing until at least next week, which means his chances of being ready April 1 are slim." Since there's no longer the enticement of being on the opening day roster, Madson can take the necessary time to rehab. And it looks like Madson agrees: With clean MRI, Madson won't rush elbow recovery - angels.com. ""I'm just going to listen to the trainers and my arm, especially, and just let it do its thing and not try to put any limits or goals on it," said Madson

MRI on #Angels RHP Ryan Madson normal but he won't throw again for at least a week. On strengthening program.

Okay, that's probably not fair, the Times does have some Angels coverage, but they rely on the Bleacher Report for their blog-style Halo coverage. Nice.

New trio of starters could be bargain for Angels - angels.com. "Jason Vargas, Tommy Hanson and Joe Blanton -- making a combined $18.725 million this season -- posted a 4.32 ERA in 583 innings for their respective teams last season. Zack Greinke, Dan Haren and Ervin Santana -- raking in $37.45 million -- had a 4.27 ERA in 567 innings. To do that again, considering how uncommonly bad Santana and Haren were last season, isn't the expectation and probably isn't very realistic. The Angels' hope for the new trio, which slots behind Jered Weaver and C.J. Wilson, is simple: Consistently pitch deep into games, and give a team with a dynamic offense and an improved bullpen a chance." As I wrote yesterday, with the potent offense the Angels should put in play, the starters will be doing enough if they hold the opposing team to under 4 runs. Maybe 5.

But then, I'm in favor of kicking the tires on this guy...just to see what it'd take to get him to sign: Kyle Lohse running out of time to find a team - ESPN (subscription required). "Los Angeles Angels Their rotation is considered their weakest link, and Boras has tried to engage them about Lohse repeatedly, according to one source. So far, they've passed. Because they signed Hamilton, they've already sacrificed a top draft pick."

Here's a low cost, possible high reward situation: Angels give Chad Cordero a minor league contract - Yahoo! Sports. "An All-Star closer for the Washington Nationals in 2005, Cordero saw his career go off track due to shoulder injuries after undergoing shoulder surgery in 2008. He pitched just six games for Washington in 2008 before getting hurt, and he made a brief return to the majors in 2010 with the Seattle Mariners, going 0-1 with a 6.52 ERA." What I find interesting with this signing is the departure from the Angels previous philosophy of not signing pitchers with shoulder injuries. A couple of years ago, I had been told by one of the Angels' front office guys (I can't remember who, but he's gone now) that the club would sign pitchers coming back from an elbow injury since those can be fixed, however shoulders seem to stay injured. So unless the thinking has changed, or the team feels signing Cordero is no risk, shoulders are back on the table.

comeback has officially begun.Just signed minor league deal with #Angels. Can't believe I might have a chance 2 play for my hometown team

Baseball Musings found this (Season Favorites):
Here are the Win over/under for each team in the West. The rest of the teams (and odds) can be found here: Forum - ViewFromVegas Forums.
Astros 59½
Angels 89½
Athletics 83
Mariners 76½
Rangers 87

I needed a reason to post a picture of a hot girl in a bikini: Sports Illustrated Swimsuit Issue Sparks Controversy. Offensive or Overreaction? - Yahoo! Shine. ""As Jezebel writes, where are the images and pictures of bustling cities, skyscrapers — the pictures reify dominant narrative about the uncivilized and primitive third world. They define people of different races as 'other' and the sexual white female body as desirable, as they're to be watched, consumed, and enjoyed by men in lounge chairs," he adds." 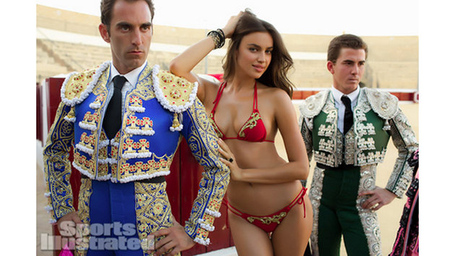 Our least favorite Miller has a new post. And it's full of one sentence paragraphs stating the obvious in his normal condescending "style": Miller: Angels can't afford more empty Octobers - The Orange County Register. Here is an example of one complete paragraph: "Soon enough, this team will be playing spring training games and then real games and we'll all start to learn if we know what we think we know." Insightful.

Nolan Ryan was one of my all-time favorite players, but I wish he'd shut up. Q&A with former Ranger great and current minority owner Nolan Ryan - Abilene Reporter-News. "Q: Last question, off the top of your head, if you could sit down and eat dinner or have some drinks with any two famous people, dead or alive, who completes your ultimate dining and conversation experience? A: "(Laughing) Good question, you know Condoleeza Rice would definitely be one of them because I really respect her and the job that she did. And then here, it’s John Wayne. Growing up and watching his career and being here in Texas, I just really respect him a lot."

In honor of Valentine's Day...a love story: Rangers manager Ron Washington on why he 'fell in love' with A.J. Pierzynski - SportsDayDFW. "On if he’s ever had a run-in with A.J. Pierzynski: I’ve never had a run-in with him. The first time that I saw him, he was catching for the Minnesota Twins and I fell in love with him. … I like his attitude, I like the edge that he brings, I like the fact that he upsets the opposing team with the way that he goes about his business. " I just want him to tie me up and pour marshmallows all over my body.

ESPN.com Has Officially Run Out Of Poll Ideas. Everyone go home. 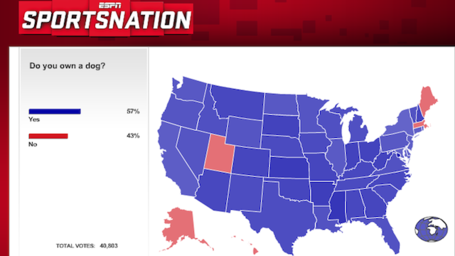 Here's an interesting post from Tom Verducci: Baseball is back (thank goodness) and it's better than ever (really) - SI.com. "The West Coast is the new economic engine Felix Hernandez of Seattle (elbow willing) will be the highest paid pitcher in history -- until Clayton Kershaw of Los Angeles leapfrogs him. Four of the six most expensive free agents who switched teams over the past four years landed in Los Angeles: Zack Greinke of the Dodgers and Albert Pujols, Josh Hamilton and C.J. Wilson of the Angels. The Angels and Dodgers combined will outspend the Yankees and Red Sox combined. The Giants have won two of the past three World Series while boosting their payroll 46 percent, from $96 million in 2010 to $140 million this year. In that span the Dodgers increased their payroll 113 percent, from $102 million to $217 million." And then, here's Rob Neyer's thoughts on it: Verducci: Baseball "better than ever" (really?) - Baseball Nation. Neyer makes an odd statement at the end, "As I've mentioned a few times, I don't mind the relative lack of scoring. But I will continue to argue that strikeouts, in the end, are not fan-friendly and something really should be done about them." Something should be done about strikeouts? Like what? Adding a fourth strike? Changing the strike zone? And who should do something about them? The players? Teams? MLB? Interesting opinion.

Torii Hunter puts Newport Beach home on market, asking for $3.975 million - Yahoo! Sports. "Built in 2006, the home offers 4,346 square feet with five bedrooms and six bathrooms, which includes a massive master suite complete with a sitting area and private deck. All for the paultry sum of $3,975,000.00 (OBO)" I added the "or best offer".