Wednesday Halolinks: Can Mike Trout Get Even Better? Who Replaces Torii?

Are Mike Trout's baseball skills sustainable, or are we going to see a drop in his production? How much did Torii Hunter help?

Share All sharing options for: Wednesday Halolinks: Can Mike Trout Get Even Better? Who Replaces Torii?

Could it even be possible that Mike Trout will get better than he was last season? We've all heard of the "sophomore slump", so a slight regression would be expected. Angels outfielder Mike Trout prepares for his first full season in the Majors - angels.com. "When he first came up, to me, he chased the slider a little bit, he chased a little bit out of the zone, and the second time, he was a different cat," Dodgers skipper Don Mattingly said. "Anybody who learns that quick will make the adjustments for whatever someone's trying to do to him." I'm excited to see how the interaction on the field will work out in the Trout-Pujols-Hamilton dynamic. I'm hoping for a 1+ 1+1=4 type of season. By the way, Fangraphs has their player projections posted. Trout has the highest predicted WAR: Now Available: Full 2013 ZiPS Projections Spreadsheet - FanGraphs Baseball. "Highest Projected WAR (Field Players): Mike Trout, 8.0". But note, that IS lower than last season.

Behind Trout, Kendrick might get a second chance - angels.com. "Angels manager Mike Scioscia will spend a good portion of the spring trying to figure out who bats in that coveted No. 2 hole between leadoff hitter Mike Trout and the menacing duo of Albert Pujols and Josh Hamilton. Alberto Callaspo and Erick Aybar will get plenty of looks there. But on nights when Vernon Wells starts in the outfield, the Angels will have more power toward the bottom of the order, which could free up Kendrick to bat second." Kendricks batting average is 50 points lower when he's in the 2-hole compared to when he bats 6th. So yeah, makes total sense.

Peter Bourjos on 3rd, and Mike Trout on first: Angels pitcher Tommy Hanson won't miss first-and-third pickoff move - latimes.com. ""Everyone looks at it like you never pick anybody off, but that was never the intent of the move," Scioscia said. "It's to control the jump of the guy at first." After the first pitch is thrown Bourjos will be sitting in the dugout, Trout will be on second, and the Angels will have another run on the scoreboard.

I think we need a caption contest: The Oakland A’s are the early winners of photo day - Yahoo! Sports 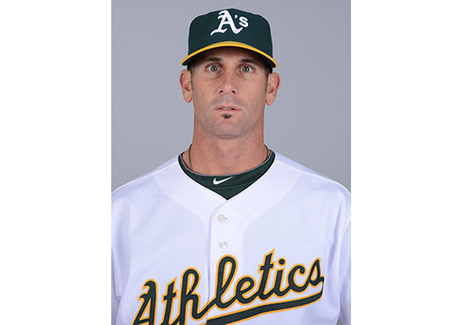 What is Grant Balfour thinking?

"His work here is done. He's moved on, but he's implanted a lot of things in the minds of some of these young guys that will help them from this day on. He did what he was supposed to do as an athlete and a person in an Angels uniform." - Angels' reliever Scott Downs

How much impact does team chemistry have on winning? How much impact does one player have on team chemistry? I really liked Torii Hunter, but it might be nice to hear from some of the other players from time-to-time: Angels hunting for someone to fill Torii's shoes - The Orange County Register. "Weaver strained to remember the last time he was in an Angels clubhouse without Hunter, back in 2007: "We had guys like Garret Anderson, but I think Torii took it to another level every day. He took that role and ran with it. Hopefully somebody can fill those shoes, but it will be pretty tough."

"We're looking forward to competing against both the Yankees and Angels." - StubHub spokesman Glenn Lehrman

This was discussed yesterday, but here's some more information about the secondary ticket market. This post notes there is no price floor at this time, at least on the Yankees' Ticket Exchange, but that's probably going to change. Here's a look at the price from three different sources: New York Yankees' "Ticket Exchange" Prices Higher Than StubHub's - Yahoo! Sports. "To get a snapshot of market forces at work, I did a quick analysis of prices for some of Yankee Stadium's worst seats (bleachers section 201) for one of the worst match-ups of the year - the Thursday, April 18th contest against the Arizona Diamondbacks:

My guess for Los Angeles sports; Lakers>Dodgers>USC>Angels>Kings>Clippers>Ducks: Which sport reigns supreme in each major league city? - HardballTalk. "Los Angeles: It’s a status city and good Lakers tickets have to be pretty high up there as far as status symbols go." But what do I know, I don't even live in the state.

NEWHAN ON BASEBALL: Claire's Payrolls: Another Time and Era Compared to $230 Million. "Doing his own research and leaning on former assistant Robert Schweppe for help, Claire said the Dodger payroll over his last five full years totaled $194.7 million, a period in which Dodgers had the fifth best record in baseball and spent the second lowest amount of money." The Dodgers' payroll for the 2013 season is expected to reach $230 million.

My "Easiest Former Angel To Root Against" player: Rays' Rodney looking to build on success from 2012 - Yahoo! Sports. "The Tampa Bay closer set a major league record for ERA by a relief pitcher in 2012, when he rebounded from a disappointing pair of seasons with the Los Angeles Angels to convert 48 of 50 save opportunities and finish with a 0.60 ERA in his first year with the Rays."

Colon apologizes for suspension; Balfour plays catch - SFGate.com blog. "For six weeks before the suspension was announced, Colon said he knew it was coming. "I continued to pitch, but my mind wasn’t good," Colon said of his time in limbo. Manager Bob Melvin said he did not know until the actual suspension what was going on; he said that initially, only the player and his agent are informed as the process (appeals, re-testing) can be done if necessary." So Colon knew he was going to be suspended six weeks before it actually happened. Interesting.

It may just be me, but David Price sure sounds like a spoiled, huge sense of entitlement kinda guy in this interview: David Price loves the Tampa Bay Rays, but how long will he stay? - FOX Sports. "Price said he’s "not taking a discount." "I don’t play this game for the money, but I don’t want to be underappreciated," Price said. "What I’ve done for this organization so far, I feel like I’ve helped this organization a great deal. So if they want to show me some appreciation, then fine." this quote is fine, but reading the rest of what he has to say sort of rubs me the wrong way.