With the recent pains and questions from two of the new bullpen acquisitions, Kevin Jepsen may become a key player in late-game situations. While the club can thank a former player for a spring training invitee.

Share All sharing options for: Thursday Halolinks: Angels Bullpen May Rely On Forgotten Man, Thank Another

The forgotten man in the Angels' bullpen: Angels' Kevin Jepsen doesn't plan to change a thing - latimes.com. "Jepsen was recalled July 5 and had a 1.67 ERA in 40 games to finish with a 3-2 record and 3.02 ERA. So what's his plan going into this season? "I'm keeping it simple," he said. "Last year, from the time I came back up, everything was great. I just want to pick up where I left off. No change. I've done that. I'm over it." As the linked article states, the reason Jepsen had to be recalled in July was because he had been sent down to triple-A in June. In Jepsen's first nine games he compiled an ERA of 10.29, resulting in his exile to Salt Lake. If Jepsen can build on, or at least continue his success he saw after his return, the Angels' pen could once again be a strength rather than the weakest link it has become the last two seasons.

Hold on, I just said the bullpen could become a strength, and two of its newest members are still nursing soreness? Madson, Burnett closer to being ready for Angels - Yahoo! Sports. "Scioscia said Madson is playing catch, his first throwing action since Feb. 1 when he felt soreness in his surgically repaired throwing elbow that caused him to miss all of last season. He is coming back from elbow ligament-replacement surgery. Burnett, who signed a two-year, $8 million contract during the offseason, aggravated his lower back while lifting his child into a car last week." I know what you're thinking, "Seriously? He hurt his back by lifting his kid?" Apparently this sore back thing is an ongoing issue with Burnett, and something that happens every year. Something he's not too concerned about:

Burnett hurt back putting kid into shopping cart grocery shopping. Says it happens every spring, always something quirky, and not worried.

There are a million little things that add up to make one slightly bigger little thing, and I think the relationship a catcher has with his pitchers is one of the littlest things. I seem to remember Jered Weaver commenting on having to get used to Iannetta, and how he missed the relationship he had with Jeff Mathis...and then shortly after, Weaver went out and no-hit the Twins, caught by Iannetta. Veteran catcher Chris Iannetta is ready for spring time with new Angels' pitchers - angels.com. ""That's what Spring Training is for," Iannetta said. "It's like any friendship. You start with the 'hello' and you get to know them off the field and in the clubhouse. That translates onto the field and it just keeps getting better every day like any other friendship or relationship in life. You get to know them better the more you're around them." 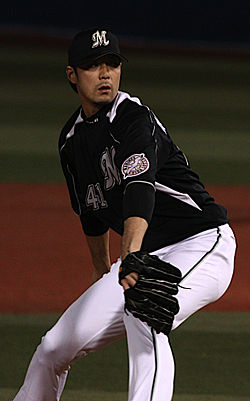 "I was very surprised with the Angels, I've been a big fan of the Angels because their games [were] broadcast a lot when they had [Hideki] Matsui." - Hiroyuki Kobayashi

This is the daily notes post from MLB. Pujols unlikely to play in games before mid-March - angels.com. "Pujols, who had the procedure done early in the offseason, showed up to Spring Training a couple days before he was scheduled to and has been taking batting practice ever since." Besides the update on Pujols, there's an interesting tid-bit about spring training invitee Hiroyuki Kobayashi. If he eventually contributes to the Halos success this season, we can all thank a former one-season player for the help.

Are groundballs the new strikeout? The Effect of Velocity and Vertical Movement on GB% - Beyond the Box Score. "Using PITCHf/x, we can find the average vertical movement for a pitcher, along with an underrated factor, velocity. With just those two attributes, how much can we learn about a pitcher's GB rate?

The Angels may soon be asking, "Do you know the way to San Jose?" MLB gives A's tentative guidelines for potential move to San Jose - latimes.com. "The existence of the guidelines does not necessarily mean the A's will move to San Jose soon, or at all. However, if the A's can satisfy the concerns of the league office, Commissioner Bud Selig could let club owners decide whether to approve the move."

I thought this was interesting: How Often Are Vesting Options Triggered? - MLBTradeRumors.com. "Vesting options often appeal to both teams and players. Teams obtain assurances that they won't be overpaying for unproductive players and players get the chance to earn more by staying on the field. There are always a handful of players with these clauses each season, but how often to do they vest?"

And this too: Reviewing This Year’s Article XX(B) Free Agents In Camp On Minor League Deals - Baseball America. "Beginning with last year's class, any Article XX(B) major league free agent who accepts a minor league deal is entitled to three automatic contract clauses: 1) he must be told five days prior to Opening Day—that's March 26 this year—whether or not he will make the 25-man active roster, 2) if he does not ask for his release and consents to open the season in Triple-A, then he will receive a $100,000 "retention bonus," and 3) if he's still in Triple-A on June 1, then he can opt out of his minor league contract so that he can sign with another organization. "