As the Angels look to find a good fit to hit second in their batting order, the answer may be right before them.

Angels - Dodger game will be televised on Prime at noon pacific time. Until then, read your Halolinks!:

Obviously, I'm a huge Los Angeles Angels fan, but I have to admit, yesterday's game was boring. Sorry, boring is probably the wrong word. How about "uninteresting"? I'm usually interested in seeing what the minor league guys can do, but I'm too excited about this season. I want to see what kind of damage Hamilton-Pujols-Trumbo can do. The only person in the line up who figures to get any significant playing time was Mike Trout, and admittedly he's reason enough to watch the game, but zzzzzzzzz: Giants 8, Angels 8 - FOX Sports. "One day after he drove in four runs against Arizona, Angels' utilityman Bill Hall was pulled from the game in the third inning with tightness in his right quadriceps. Hall, who started at third base, was trying to make a play while charging a chopper near the mound that went for a hit. The Angels said he is day to day." I hate it when I get hurt "charging a hopper near the mound".

It might become interesting if Cowart continues to have a good spring. Will he make the big league club? Cowart finding groove hitting left-handed - angels.com. "In the sixth, he singled up the middle off Chad Gaudin. In the seventh, off Santiago Casilla, he hit a shot deep in the left-center-field gap that Juan Perez tracked down for a highlight-reel catch. And in the ninth, against closer Sergio Romo, Cowart hit an RBI double that helped lead to a two-run, game-tying frame." 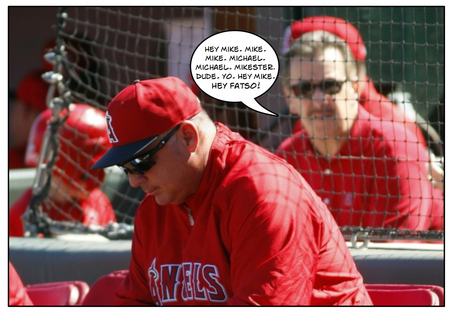 I'm starting to worry, This is the second time I've agreed with Lyle this week: Lyle Spencer: Mike Trout's versatility could make Angels' lineup stronger - angels.com. "But the feeling here, expressed by several veterans with time to kill in a National League clubhouse the other day, is that Trout would be even more dangerous hitting second. An uninterrupted grouping of Trout, Pujols and Hamilton would be a horror show for pitchers. Trout hit 30 homers despite spending most of last April with Triple-A Salt Lake. He was fourth in the Majors in slugging at .564. Trout's power would be exploited more effectively if he didn't feel compelled to focus on seeing pitches leading off. Only five hitters in the Majors swung at fewer first pitches than Trout's 9.4 percent." Imagine if Peter Bourjos could adequately man the lead off spot with Trout hitting behind him, and in front of Pujols. That batting order would be devastating. 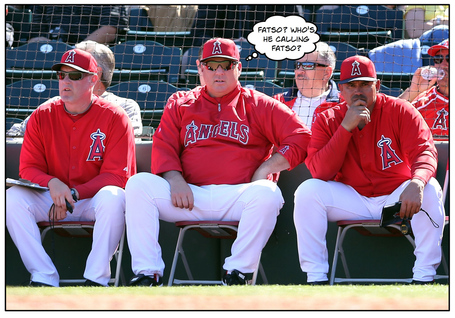 Hey! I remember that guy! Mike Hampton jumping back into baseball as Angels Double-A pitching coach - angels.com. "Hampton got the itch to get back in the game a few months ago, so he had his agent put out feelers for potential coaching jobs. And the most appealing wound up being the new pitching coach for the Angels' Double-A affiliate in Arkansas, where Hampton will join a coaching staff led by his former Astros teammate Tim Bogar." 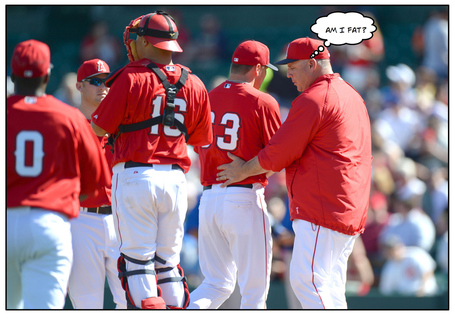 This is an interesting video and story: A legendary baseball card of Honus Wagner stars in the latest from the 30 for 30 documentary series - Grantland. "Bought and sold many times over, the copy once owned by Wayne Gretzky has now appreciated to nearly $3 million. But, this gem may have been doctored. "

I'm really glad to see Brandon McCarthy is on the road to recovery. Brandon McCarthy of Arizona Diamondbacks throws 2 innings in return to mound - ESPN. "Nearly six months after taking a line drive off the head in Oakland, McCarthy made his Cactus League debut for the Diamondbacks against Cincinnati. He struck out four batters in two innings and looked fully recovered from the incident that forced him to undergo emergency brain surgery and jeopardized his baseball career and his life in September." 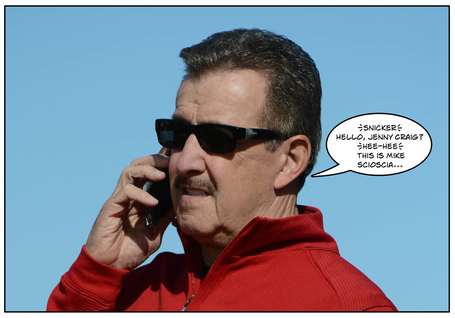 I'm sure Torii is relieved: Sexual assault charges against Hunter's son dropped - Yahoo! Sports. "The grand jury's decision means it did not have enough evidence to prosecute McClinton-Hunter. Another teen was indicted on a charge of unlawful restraint, the Dallas Morning News reported."

Ladies and gentlemen, I present to you one of the world's biggest douchebags: Hockey Coach Jailed For Tripping 13-Year-Old In Handshake Line 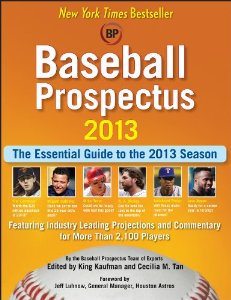 I received a review copy of this yesterday: Baseball Prospectus 2013, and I like it...at least so far. This is only the second copy I've read, so I'm not sure how its changed over the years, but it is a useful source for quick reference. Baseball Prospectus has made the game better. - SportsonEarth.com. "The book is still essential -- I'm still reading every word of it -- but somehow less dangerous. Less outsider. Less … fan. It's as if BP is self-aware and knows every front office in baseball has a copy now. You can't help but lose a little of your edge once you're no longer fighting against anything, once you're accepted."