The Angels' third baseman isn't going to put up spectacular numbers, but he will provide the club what they might need most at his position...predictable performance.

Share All sharing options for: Thursday Halolinks: Alberto Callaspo Is Unspectacular, And That's A Good Thing

Here they are, your Halolinks for today:

There were three posts about Angels' third baseman Alberto Callaspo yesterday. Well, actually two and a ranking. And they both stated pretty much the same thing; Callaspo is good, but not great. Transaction Analysis: Yippee Callaspo - Baseball Prospectus. "Re-sign 3B-S Alberto Callaspo to a two-year extension worth $8.975 million. [2/5] A nifty move by Jerry Dipoto. Matt Swartz's projections had Callaspo making $4.2 million through arbitration before hitting the open market this winter. Instead the Angels get Callaspo in 2013 for $4.1 million and in 2014 for $4.8 million. Callaspo's contributions can go understated on a roster alongside Albert Pujols, Mike Trout, and now Josh Hamilton, but he's a solid player—and this is a solid deal. The Angels have now locked up their entire 2013 lineup for 2014, too." (once again, apologizes if this post is behind a paywall.) Did you notice that last sentence? If the non-pitching part of the roster is good this year, we'll get to see them again in 2014. And who doesn't think the club isn't going to be good this season?

The second post just kinda goes over the "history of Callaspo", but asks an interesting question: Callaspo, Defensive Positions, and Contact - FanGraphs Baseball. "His range played better at third, and his arm also worked out there. Unfortunately for Callaspo, his bat tanked, and with Mike Moustakas knocking on the door, the Royals traded him to the Angels. In any case, he is now firmly entrenched as a third baseman. Six years ago, who would have thought that in 2012 that Alberto Callaspo and not Brandon Wood would be the Angels’ third baseman?" You don't even have to go back six years. I remember in 2009 thinking Brandon Wood was going to be the next big thing.

Okay, so here are some ranking for 3B. 2013 Fantasy Third Base Rankings - FOX Sports. The Halos' 3B isn't mentioned by any of the writers, and if you also click the link on this page ranking the top 25 third basemen in baseball, you won't find Callaspo on any list. Does that mean he sucks? Yeah...for your fantasy team, but in real-life he's adequately fills a need.

I think this is pretty neat: Mickey Mantle’s $1,150 bonus check from Yankees up for auction - Yahoo! Sports. "This might be the coolest piece of auction memorabilia The Stew has ever publicized: The $1,150 check Mickey Mantle received from the New York Yankees to cover his signing bonus in 1949. If that price sounds a little low for Mickey Mantle (even in 1949, when $1,150 could buy about $11,100 of goods), you're right. The Yankees ripped him off!

Who's excited? I'm excited, are you excited?? We're all excited! No. 5 Angels: No excuses for a quiet October with Albert Pujols and Josh Hamilton in lineup - Yahoo! Sports. "They couldn't hit, then they couldn't pitch, and by the time they could do both, they'd already burned another season. Suddenly the Angels were underachievers three seasons running, even as their payroll grew and Moreno's glare narrowed. Is that Jerry Dipoto's fault? Predecessor Tony Reagins'? Scioscia's? The players'? The farm system's? A fourth dark October and we're very likely to get Moreno's opinion. Forget New York and Boston, two hotbeds of expectations and stress. The greatest pressure to win in the American League comes to Anaheim, to Dipoto's and Scioscia's doorsteps, a pressure matched in baseball only by that in Los Angeles, on the National League side."

We're going streaking through the quad: Josh Hamilton is the definition of a streak hitter - latimes.com. "Hamilton, 31, a five-time All-Star, is confident the tobacco and caffeine issues are behind him. "When I stopped dipping, I didn't realize I was drinking more coffee," he said during a recent interview near his home. "I'd have an energy drink before a game and a Mountain Dew after it. My caffeine intake went way up. I was overstimulated. My eyes were good, but I was just so wired I couldn't focus." There it is. That Dew will do it to you every time. Bastards. 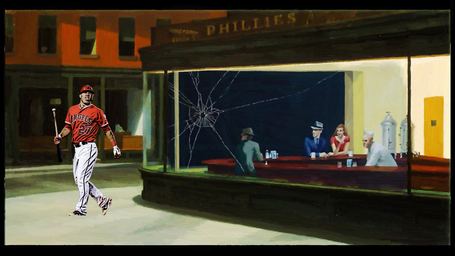 Yesterday was Babe Ruth's birthday. Should be a national holiday: Joe Blogs: Feb. 6 Birthday: Babe Ruth. "Of course, none of this had anything to do with Ruth's baseball contributions -- he led the league in on-base percentage 10 times, and he led the league in slugging every single year but one from 1918 to 1931. It's a fascinating question to ask how good Ruth would be in our time. Baseball is obviously a completely different game now."

I found a pretty cool software package, that with some effort, converts black and white photos to color. Here's an example I've been working on: 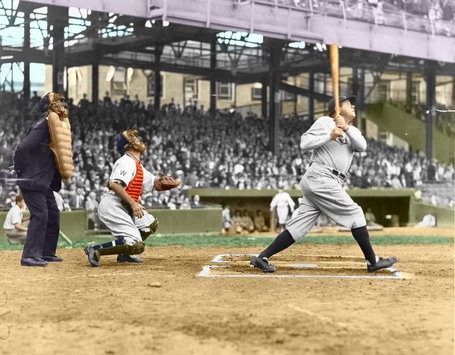 After bruising years, Lackey ready to take mound - The Boston Globe. "When rookies get called up, it is Lackey who picks up the check at dinner or buys them a new suit, repaying favors done for him years ago.... "You won’t find a more popular guy among his teammates," said Tampa Bay Rays manager Joe Maddon, the bench coach of the Anaheim Angels when Lackey played there. "He’s an enjoyable person to talk to and I know you don’t believe that. John just isn’t conscious of his public image and never has been. He grew up as a baseball player and he considers himself accountable to his teammates, not the fans. It can come off the wrong way."

Today's "Spencer's 4000 Award" goes to Sam Donnellon from the Philadelphia Enquirer. Sam couldn't find anything interesting to write about so he decided to re-hash the Hall of Fame ballot shit: Better to judge baseball talent with the naked eye - Philly.com. "Thing is, I saw Jack Morris pitch, and he was great. Great enough for the Hall of Fame? All I know is there are less great players in there. It's one reason I don't use my Hall of Fame ballot. Statistics, even the more contrived ones, have value. Greatness, though, is a naked-eye assessment." He even uses the tired ol' livin' in da basement rant when referring to those who use statistics.

BP Unfiltered: Jhonny Peralta Makes Five ACES Clients Tied to East Coast BALCO - Baseball Prospectus. "But, in a case that may be a more disturbing trend than a random assortment of MLB players being in the ledgers of the lab that has potentially doled out hGH, creams containing testosterone, and other banned substances, of the 12 players that have surfaced in the media with potential ties to Biogenesis, five have been or are currently represented by the player agency ACES, run by Seth and Sam Levinson. Peralta is now added to Nelson Cruz, Gio Gonzalez, Jesus Montero, and Melky Cabrera, whose 50-game suspension for elevated levels of testosterone and a fake website that he planned to use as a potential loophole to get out of any suspension, all have associations to ACES."

Rare 1865 baseball card fetches $92K at auction - ESPN. "A Maine man who doesn't want to be publicly identified found the card inside an old photo album he bought while antique picking in the small town of Baileyville on the Canadian border. The man bought the photo album, old Coca-Cola bottles and a couple of oak chairs together in a single purchase for less than $100, Thibodeau said."