Despite battling aches and pains to his knee and foot, Albert Pujols says he's ready to start the season.

Less than two weeks and the games will count. As you're thinking about that, read your Halolinks:

I got side-tracked yesterday afternoon and missed the first few minutes of the game. Since the Angels were playing the Brewers, I was able to watch the game on television instead of MLB.tv, and when I tuned in, the first thing I thought was "WTF?" Brewers 6, Angels 1 - FOX Sports. "''Just keep it moving,'' McClelland said. ''We didn't want people to sit. Both managers agreed to it, and I knew it wasn't going to be long. This way we didn't have to sit and could keep the game going.'' That's one of the cool things about Spring Training, you're never sure what you're going to see.

Umpire Tim McClelland called balls and strikes from behind the mound in the Brewers-Angels game Tuesday - angels.com. "Seth Buckminster suffered a broken bone in his left hand when he was struck by a Wily Peralta pitch that deflected off Angels star Albert Pujols with two outs in the top of the first inning. Buckminster was tended to by a Brewers athletic trainer and left the field immediately, along with another ump, Anthony Johnson, who quickly changed into Buckminster's gear. In the meantime, veteran umpires Tim McClelland and Jim Joyce covered all of the bases, with Joyce stationed at first base and McClelland behind the pitcher's mound calling balls and strikes."

This is interesting. For a pitcher, I guess there's more to getting ready for the season than just pitch counts. Warming up and starting an inning seems to be something that the Angels track/manage during the spring: Vargas works deep, gets taken deeper - ESPN Los Angeles. "That was Angels manager Mike Scioscia's pointed purpose on Tuesday. Despite the five runs allowed through five, Scioscia sent Vargas out to the mound in the sixth to get one more out (first baseman Alex Gonzalez), as he has with C.J. Wilson and Joe Blanton as well this spring. "Just getting up, get up, take your warmups, get out there for an inning to give yourself a little bit of stamina," Scioscia said. "There's no doubt the ups are as important as the pitches." I had noticed it in Blanton's start that he had faced just one batter in the inning and then was taken out and thought to myself, "Why did he start the inning just to face one guy?" And that's the reason, "Ups are as important as the pitches."

It appears Pujols is healthy: First base remains Pujols' preferred designation - angels.com. "Asked if he could have played nine innings on Tuesday, he replied predictably: "Of course." "But playing nine innings right now is being selfish," Pujols added. "I don't need to play nine innings right now, when there's no need. So, take the rest and play smart when you can, because as soon as the season starts, my goal is to play over 155 games, and that's what I'm going to try to do." Moving to the A.L. will certainly help him reach his 155 game goal, as he can DH once or twice a week. However, Pujols doesn't think he'll need to do that that often. Of course that all relies on how healthy he stays: Pujols says he's 'too young to be a DH' - USAToday. "Yet, most encouraging, Pujols said, is that the pain is gone. He revealed that the pain in his knees affected his hitting the last six weeks of the season. "It was bothering me the last six weeks hitting,'' Pujols said, "and I had to deal with it, and had to change my approach. It was pretty rough. "I don't feel pain now, so I know things are coming along pretty well. I'm seeing the ball really good. I actually feel better than last year at this time in spring training, and my numbers last year were pretty amazing (.383, seven homers and 20 RBI).''

Last week I mentioned that while watching the previous day's game, I noticed Pujols limping in the dugout. Here's why: Pujols battling mild plantar fasciitis in left foot - The Orange County Register. "After Pujols played his first innings of the spring in the field Tuesday, Manager Mike Scioscia revealed that his slugger has also been battling plantar fasciitis in his left foot.... Pujols had brief bouts with plantar fasciitis in 2004, 2005 and 2006, but he never went on the disabled list because of the condition." Great.

Oh yeah, and it seems Madson's elbow is still bothering him: Ryan Madson injury: Angels closer shut down again - MLB Daily Dish. "Manager Mike Scioscia told reporters that he expects Madson to return to the mound in the next few days. The skipper summed up the tightness his closer is experiencing as "the normal progression of the final stages of rehab."

I think this is behind their subscription wall, but Sam Miller takes an interesting look at Jered Weaver: Pebble Hunting: Watching Jered Weaver - Baseball Prospectus. "The point isn't that any of these effects are or they aren't. The link between process and outcome is hard to prove. Weaver's arm-raising coincided with his best years, ERA-wise; it also coincided with his declining strikeout rate, strikeout-wise. It coincided with much better results against lefties, but there are plenty of explanations for that—some discussed here last summer—that might be more compelling than this one."

Greed. Plain and simple. MLB owners want to abolish pensions of personnel, sources say - ESPN New York. "The potential impact of eliminating the pension plan would affect much of the MLB family: front-office executives, trainers, minor league staff and scouts. Some of those personnel, particularly on the minor league level and in amateur scouting, make less than $40,000 a year and rely on pensions in retirement." Just because you can do something, doesn't mean you should do something. The owners are within their right to eliminate pensions, but that doesn't mean they should take advantage of their employees' desire to have a career in the game they love. MLB owners set to kill pension for non-uniformed employees - Yahoo! Sports. "Owners spokesperson Rob Manfred says that just because the owners might vote to make this pension plan no longer mandatory, it doesn't mean that one or 20 or all 30 teams won't have pensions going forward. It would just give the individual franchises "more flexibility" to create their own idea of a pension. Of course, with baseball being a cartel, the lines often are blurry on the definition of "individual franchises" with these guys."

I thought this was interesting, the same MLB executive quoted in the above stories (Rob Manfred), is then quoted saying this:

What is the truth?

Just when you thought it was safe to go to the ballpark: Joba Chamberlain’s mustache might give you nightmares - Yahoo! Sports. "Yes, that's Joba Chamberlain. Yes, that's his actual mustache, not a way-too-early Halloween costume or a glue-on spring-training gag. " 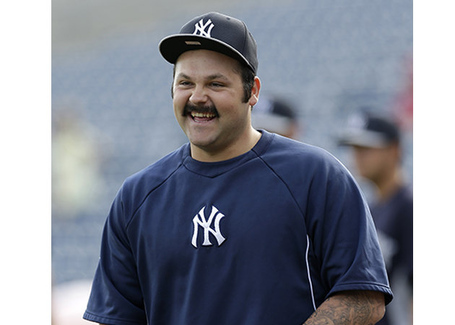 Yesterday's Halolinks contained a link to a story about StubHub opening a "store" near Yankee Stadium so that people could pick up their tickets purchased online. Looks like his fight is just getting started: The Yankees get a temporary restraining order against StubHub - HardballTalk. "A TRO is granted without any kind of hearing or evidence beyond the sworn statement of the plaintiff, in this case the Yankees, saying that they will be irreparably harmed if the activity at issue isn’t stopped."

When bad baseball fans die and go to hell, they're forced to become Marlins' fans: Report: Marlins threaten to sue ticket holders over seat complaint - CBSSports.com. "The report goes on to say that the Leons signed a multiyear seat agreement with the Marlins in September 2010 that required them to pay $25,292 in September for the upcoming 2013 season. They say they haven't paid because the team refused to move their seats, so their bill is technically five months late and that's why the Marlins have threatened legal action."

And here's another story we're going to be hearing a lot about this season: Nightengale: Braun remains calm amid drug firestorm. "There are at least 90 baseball players, including Braun, whose names appear in the infamous Biogenesis Clinic records, according to one baseball official with direct knowledge of the investigation."

I'm not completely sold on Andrew Romine. And I'm sure there's more to this story as to why the Cardinals let Cedeno go, but he might be a decent backup kinda guy: Cardinals release Ronny Cedeno - HardballTalk. "Considering the Cardinals’ need for middle infield help following Furcal’s season-ending elbow surgery and the money they agreed to pay Cedeno less than two months ago they must really, really have thought he looked terrible in camp. And yet he hit .290 with a .791 OPS in 16 spring training games."

Dodgers Release Dallas McPherson - MLBTradeRumors.com. "McPherson signed a minor league deal with the Dodgers in December and had been re-assigned to minor league camp earlier this month. The former top prospect last appeared at the MLB level with the 2011 White Sox."

Entertaining post: How Jesus Montero Threw Out Mike Trout - FanGraphs Baseball. "Half the time that Mike Trout tried to steal against Jesus Montero, he was thrown out. Montero seldom throws runners out, and Trout seldom gets thrown out, so this was an event of significance. How did it happen, with Trout being an unparalleled talent and with Montero being a defensive catcher who is at least considerably below-average? "