Yesterday, someone asked me about the forecast. Today, I'd like to provide a couple of pictures. 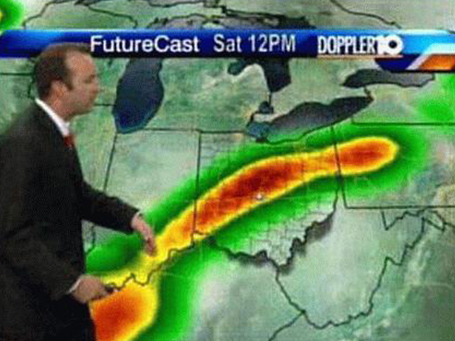 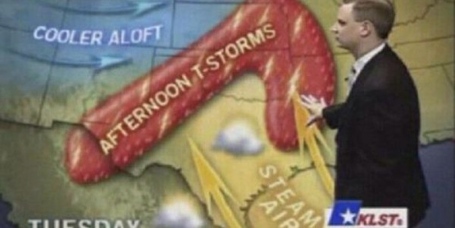 Yes, as in life, the weather too has its ups and downs.

Yesterday, besides it being a day for me to act like a 12 year-old boy, was basically a day off for the Halo regulars as the Angels faced Team Italy. That's not to say Jered Weaver isn't regular, but he was the pitcher whose turn it was to take the hill: Prospects spark Angels' win over Team Italy - angels.com. "Weaver, who declined an invitation to play for Team USA in the World Baseball Classic, worked three innings and held Team Italy to three hits. Weaver, battling his command, threw first-pitch balls to each of the first eight batters he faced, but he struck out five batters and didn't issue any free passes. "I took it just like any other team," said Weaver of Team Italy. "You're just trying to get your work in no matter who you're facing out there. They've got some big league guys in their lineup and some guys that can swing the bat. No matter what jersey they've got on ... you take it the same way."

My son showed this to me last night: I am Blue Jays outfielder and 3 time MLB All-Star Jose Bautista, ask me anything! - Reddit. "Who is the toughest pitcher you have faced in the majors? P.S Mets fan so im pretty much rooting like hell for you guys to win the AL east, good luck this year.
JoeyBats (Bautista): For right-handers it's Jered Weaver. For lefties it's CC Sabathia.
AsDevilsRun : For those interested, his numbers against: Weaver: 0 for 6, 4 K, 1 BB. Sabathia: 1 for 19, 1 single, 8 K, 4 BB. It's my only chance to be equal to him. I have as many hits off Jered Weaver as he does."

A couple of former Angels in the news: Scott Kazmir throws for scouts, looks pretty good - HardballTalk. "As Kazmir was winding down I talked to one of the scouts. He thought Kazmir looked good and agreed with me that his velocity was nice (between 90 and 92 mph), especially compared to where he was a year or two ago. As for the breaking stuff: yes, some issues with location, but the scout liked the deception. Especially his slider, which really had nice movement. And obviously deception is the name of the game." It's nice to see Kazmir making progress, just as long as it doesn't come at the Halos' expense.

I guess you can teach an old dog new tricks: Hunter homers for Tigers, Verlander dominant - Yahoo! Sports. "''I like him in the second spot,'' Tigers manager Jim Leyland said. ''He's got the right attitude about it and he knocked in a lot of runs for the Angels last year in that slot. It isn't going to be an adjustment for him at all. He did a lot last year.'' ''I don't need home runs,'' Hunter said. ''I just need to score runs.'' I always thought Hunter got a little "homer-happy" at points during the season. Although his strikeout rate was up last season, maybe the change in his approach was what led to his first .300 batting average. Or he was lucky. I'm kinda leaning towards the lucky thing.

I wish he was holding a grudge, he might use that to have an even BIGGER monster year: Angels' Hamilton primed for monster year -- but holds no grudges - CBSSports.com. "The bat remains about the biggest in the game. The drives seem to disappear into the camouflaging skies here by the enormous light tower in right. With Trumbo and Pujols here, he's in his element on the lovely field bracketed by the Buttes. "I'm where I want to be," he said. "And I'm where God wants me to be." And he's where Angel fans want him to be.

If these are the disappoints, the team has little to worry about: Top 3 Spring Training Disappointments for the Los Angeles Angels - Yahoo! Sports. "Last July, Dipoto acquired starter Barry Enright from the Arizona Diamondbacks. Enright made three appearances for the Angels in September, all in relief. This spring, Enright was invited to camp but was considered a longshot at best to crack the 25-man roster. Enright's performance early on has not given the Angels much hope that he can be a capable replacement should any of the Angels' five established starters falter or get hurt. Enright has a 13.50 ERA after his first two outings, allowing four runs on eight hits in 2 2/3 innings. It's likely that Enright will start the season at Triple-A Salt Lake. The Angels are hoping that Enright can recapture the form that led him to post a 3.91 ERA in 17 starts for the Diamondbacks three years ago in his rookie season." First off, let's not start worrying after just 2 2/3 innings...that's not a small sample-size, that's a microscopic sample-size. Secondly, Barry Enright wasn't being counted on to do much of anything as far as contributing to the Angels' success this season.

This isn't the most insightful story, but I included it to make a point: Angels' Trumbo moving to the swing shift - The Orange County Register. "While some players say they aren't as good at the plate when they aren't playing the field, so far that doesn't seem to be an issue for Trumbo. He has hit .306 with a .565 slugging percentage in 23 games at DH. Those are actually better than his .259 and .468 numbers overall." The point being, I was able to read and link to this OC Register story because the Register doesn't hide behind a paywall. The coverage might not be the greatest, but at least it's there. However, let's compare it to the LA Times' Angel coverage:

I have an issue with the LA Times. Actually, I have two issues, but I can't show you one of them because the other prevents it. Apparently, the Times feel their content is so excellent that just like the printed version, we should pay to read their online version. There are a couple of other dinosaur print outlets on life-support clinging to the hope people will help keep them afloat by paying for their content by putting it behind a paywall, but most news gathering/distributing ventures provide their content for free. Sure, the free stuff usually includes a few ads, but at least the content is getting read. And it's not like I have something against paying for content. I pay for an ESPN Insider account (why, I don't know, but that's another matter), as well as Baseball Prospectus, and Rolling Stone. All I want is value for my money, which leads to the second issue I have with the LA Times...the article I tried to read was about the tragedy Chad Cordero has had to overcome to get another opportunity to pitch again in the major leagues. You know, the story we've been following for 2 weeks now. An interesting feature story that every other news outlet has already beat to death. Last week the Times wrote about this player named Mike Trout that's making quite an impression on the Angels, this week it's this Cordero dude who's trying to make a comeback. Yeah, I'm going to pay for that cutting-edge reporting. What you'll see here is a lack of LA Times links. If I can't read it, I'm not going to link to it.

I have no idea what the financial situation is at the Times, or how their editorial staff feel is the importance of covering a sports team in Orange County, but to me (just a regular guy), it doesn't look good...just like these guy's: Life At Sports Illustrated Is About To Become Even More Difficult. "It's a dying industry—as the (New York) Times noted, SI's newsstand sales have dropped 46 percent in the last five years—and though Time Inc. still has revenue in the billions and profits in the hundreds of millions, there won't be a big, rich sugar daddy to take care of these increasingly endangered titles. " While reading this story, I was led to the following link with news so disturbing, I'm actually thinking about foregoing all sports news for the rest of my life: CNN moves forward with Bleacher Report replacing Sports Illustrated. "Another element to Turner's acquisition of Bleacher Report is the partnerships within Turner and Time Warner and more specifically, Sports Illustrated's lengthy relationship with CNN. Beginning in February, CNN's sports content will be provided by Bleacher Report instead of Sports Illustrated. " This article was from January of this year. News like this leaves me entirely perplexed about the internet, sports reporting, and life. If Sports Illustrated has the potential to disappear, and the LA Times acts like they want to disappear, will I be required to get some of my sports addiction news intake from the BLEACHER REPORT?!?! GAH!!!!11!!

Once you get done moving the outfield, you can go inside and start cleaning the nine bathrooms...one for every player! Atlanta Mansion Has its Own Baseball Diamond (House of the Day) - AOL Real Estate. "Though it's no Wrigley Field or Fenway Park, the backyard on this Atlanta mansion is about the next best thing, we think. Baseball not really your thing? No worries. This $9.7 million beast of a home also boasts a helicopter pad for the aviation-obsessed, and a Hartley-Botanic greenhouse for the green thumbs." 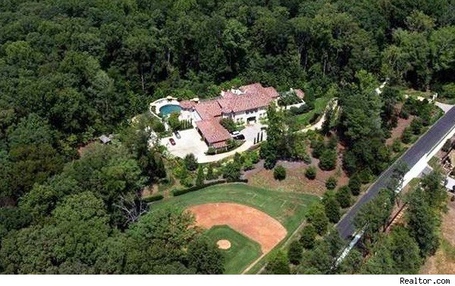