A first class operation is functioning at Angel Stadium this season. No, not the underachieving team on the field, the Diamond-Club-Adjacent Oakley Store!

Share All sharing options for: Oakley Store at Angels Stadium is Season's Biggest Hit So Far!

The Angels invited Halos Heaven to have a look at the new Oakley store at Angel Stadium of Anaheim. The store is located at the 3B entrance to the Diamond Club on the field level but it is open to all fans. If you associate Oakley with eyewear, you are a little behind the times as this Orange County company carries lots of clothing and lifestyle accessories - and at their Angel Stadium store they have exclusive merchandise using the Angels brand that you cannot purchase anywhere else, not in the team store, not in a thrift store, nowhere.

One of the coolest things the store has is an etcher. They can etch your name onto the lens of a pair of Oakley eye wear. They can also etch the Angels Haloed A logo. They cannot, however, etch a player's name.

At the media melee, Alex Curry was in attendance to tape a segment on the store for her Angels Weekly television show. For the record, she is about four times hotter in person than she is on television. She had a Luis Vuitton purse and awesome high heel shoes. She got to pick out a free pair of Oakley glasses and chose red framed, red-lensed with an Angels logo engraved in them, so you cannot discount her team spirit.

Two Angels, Mark Trumbo and Howie Kendrick, personally vouch for Oakley and used the company's products prior to being hired as celebrity endorsers. They showed up and milled about, unfailingly polite and happy to autograph baseballs and grab some free swag.

Click Any Picture Here to Enlarge For a More-Detailed View. 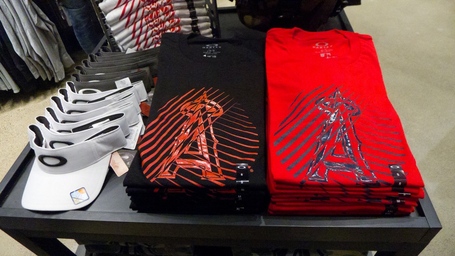 THE Oakley Stadium Store features Angels Logo designs on merchandise available nowhere else and produced in limited quantities. What you see here might be sold out before the homestand ends and could be never available again. 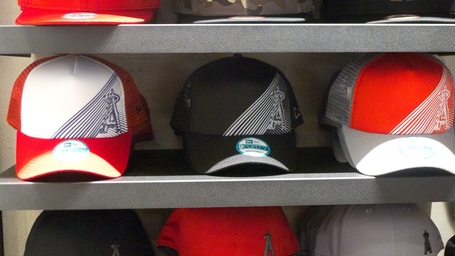 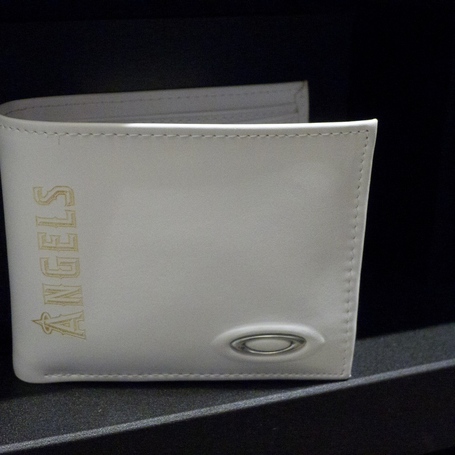 You should buy me this awesome wallet for Christmas. 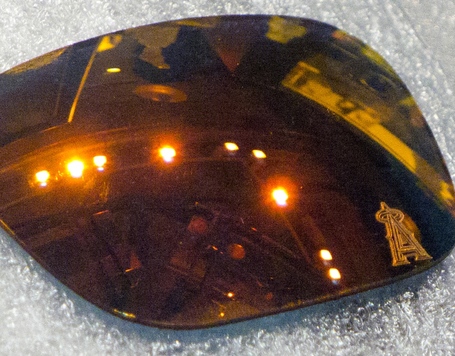 Custom-Engraved Angels logo on an Oakley lens. They have a high-tech machine do it right there. The machine uses a diamond, not a laser. I asked. 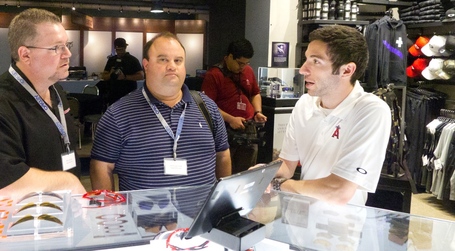 (L-R) Brian Ilten and David Saltzer from Angelswin.com and a rep for Oakley get the dozens of products in the store explained to them. 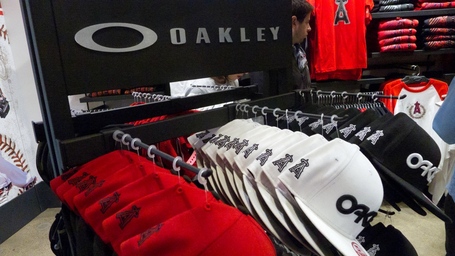 More custom caps - Oakely in the front, Angels on the side! Not sold in the team store! 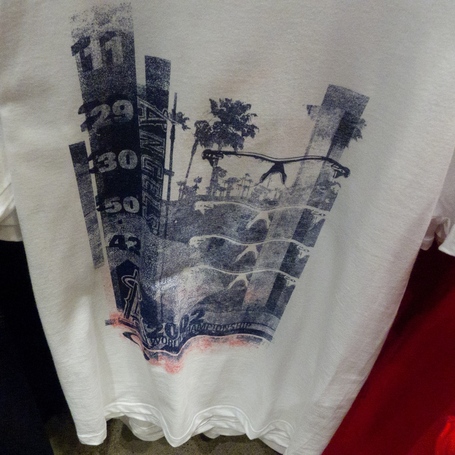 Amazing custom Oakley shirt with all the Angels retired numbers (except Gene Autry's #26). Once they sell out of this style I doubt it will be back... just sayin' if you are a collector you might want to grab this now. It is not like an Albert Pujols jersey that will be for sale for the next nine seasons... 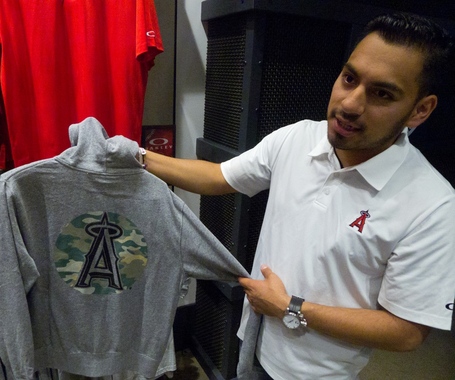 This Oakley store spokesperson explained that camouflage is a huge seller in the few games that the store has been open for this season. He noted that families of military personnel and veterans love it. 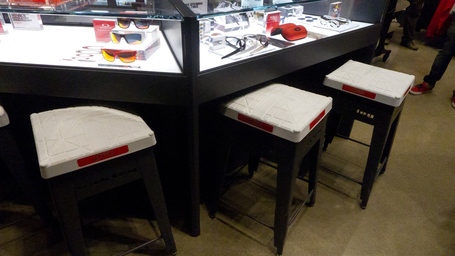 These custom stools that have bases for seats are not for sale. One store employee said the only negative at the store so far has been explaining to fans who walk in with beers that it is not a bar and that they cannot just sit down here and talk about the game to others. 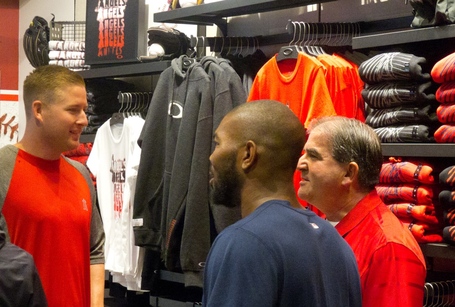 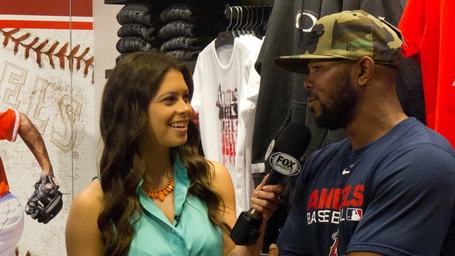 The Angels Weekly's Alex Curry interviews Howie Kendrick, who was more than happy to grab a cammo Oakley Angels cap for the interview. 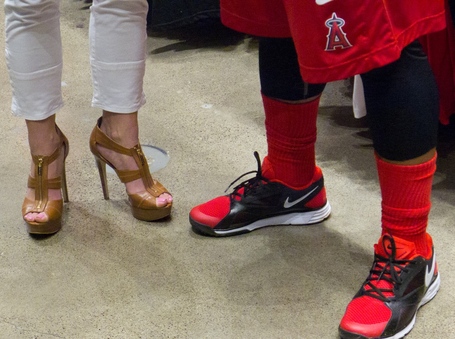 The shoes of Alex Curry and Howie Kendrick. 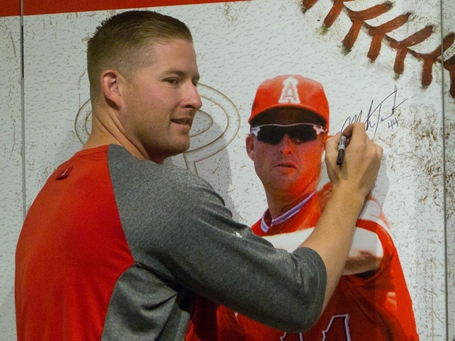 Mark Trumbo signs the Oakley Store Wall mural of himself. 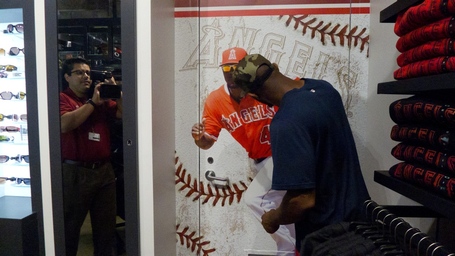 Howie Kendrick signs the wall (actually a closet door to the stockroom). The cameraman reflected in the mirror there shoots for the team, so don't be surprised if you see this on the stadium jumbotron, but you saw it here first! 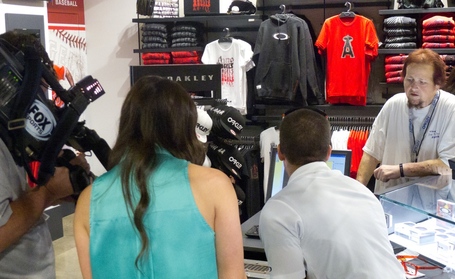 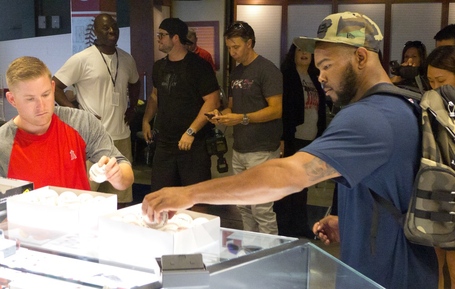 Trumbo and Howie signing baseballs. Note that Howie grabbed an Oakley backpack to match his cap there. Gotta love the swag! 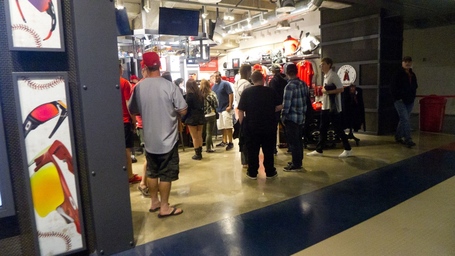 Exterior of the store during a game. It gets mobbed. To the far right is the 3B-side entrance to the diamond club!

And I have to mention that the Angels and Oakley had a huge spread of food and gave me a free pair of glasses for the trouble of coming down to the stadium on a Friday afternoon. Thanks!

But fed or not, let's look at the facts: We got us a stadium going on the ripe old age of fifty. There are dorks hawking Orange County Register Paywall Subscriptions and we are not too far removed from a season the team had an in-stadium sponsor selling time-shares with free Angels tickets as the draw to come to a wear-them-down sales pitch meeting.

The Oakley Store represents a huge upgrade to the stadium - it is a classy retail space with great products and exclusive team merchandise. It may not be your cup of tea or beer but something about this store signals the future of where the stadium experience is going, and count me enthused if that is away from the hucksters, junk food, carnival barkers and same-old-same-old merchandise stands.