Is Luis Jimenez Ready for the Show?

The promotion of prized prospect Luis Jimenez has certainly been not just a pleasant surprise, but also a nicely-timed breath of fresh air for the lineup. However, is Jimenez truly ready to be here?

Share All sharing options for: Is Luis Jimenez Ready for the Show?

It was before the series against the Houston Astros began, on April 12, that Luis Jimenez received his promotion to the big leagues and was placed to start at third base, batting eighth. Since then, his performance, coupled with Alberto Callaspo's injury status, has not only begged the question of whether Callaspo needs DL time (and therefore Jimenez would start in his place in his extended absence), but also that of whether Jimenez should be the starting third baseman even after Callaspo has rehabbed from his injury. Now, before getting into the numbers of it all, let us first consider that Callaspo, before returning to the Angels, has decent amounts of playing time at both second base and shortstop in his career; therefore, if Jimenez WERE to take the place of Callaspo, we could afford to send down either Andrew Romine or Brendan Harris, and keep Callaspo as a super-utility type--in other words, we'd have another Maicer Izturis.

Going simply by slash lines, at the beginning of spring training, I had projected that Alberto Callaspo go .274/.347/.388, while Luis Jimenez, if he were to be (somehow) the everyday third baseman over Callaspo, be at .268/.304/.420. That would've amounted, then, to Callaspo being the superior player if you want to go strictly by OPS (.735 for Callaspo, .724 for Jimenez).

Even getting into ALL of the statistics, Callaspo looked, at the outset of spring training, to be the far superior ballplayer. Which isn't surprising--Jimenez had yet to play a game in the majors, while Callaspo had established himself in the big leagues for seven seasons.

However, an injury to Callaspo forced the Angels' hand in calling up the young Jimenez from Salt Lake, and ever since his arrival, he's impressed many--7 hits in 16 at-bats (a .438 average), including 3 doubles, with a 1.096 OPS. Granted, that's in five games, but the season is young enough to where that's significant. Callaspo has started the team's other nine games at third base, with 9 hits in 33 at-bats (a .273 average) and a .745 OPS.

Be it simply the motivation of having his chance at long last, or maybe we've been burying a diamond out in all that salt, it's time to seriously look at this issue.

So, what I did FIRST is took my initial projections at the beginning of the season, subtracted the totals that have actually been achieved (i.e. subtracted Callaspo's stats through his 9 games from the projections, then Jimenez's stats through his 5 games from HIS projectiosn), and treated the actual totals up to date, and the projected totals that I did in February, as two separate sets of data, to be averaged out. I weighted each set in accordance to the percentage of games they've completed (for Callaspo, that was 6%; for Jimenez, that was 3.5%. This put the projected totals' weights at 94 and 96.5, respectively).

For THAT, this is what I came up with, in the image below. 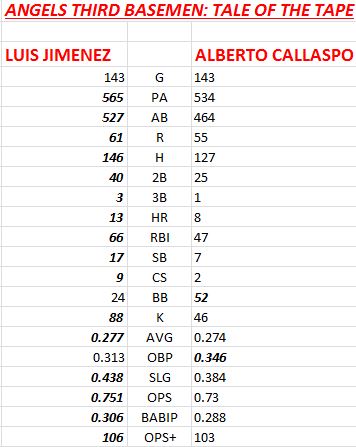 Going strictly off of that, Jimenez would appear to be the superior player in most counting stats and rate stats; however, the two where he falls short are two of the most important: walks and on-base percentage. Jimenez, while not a big strikeout hitter in the minor leagues, also was an impatient hitter, drawing very few walks during his time in the minors in comparison to his strikeout totals. Callaspo has been noted throughout his career as a patient hitter, especially his tenure in Anaheim, where he has 130 walks to 127 strikeouts.

In terms of the number of stats Jimenez would best Callaspo in, it looks as though the decision is a slam dunk--but patience is one of the most important components (if not THE most) to being a successful hitter. Those two stats--walks and OBP--are enough to cast significant doubt on whether Jimenez is ready.

However, once again I would say to look at Jimenez' totals throughout each season of his minor league career--his trademark has been a high strikeout-to-walk ratio, without ever having an absurdly high strikeout total (averaging approximately 80 per season in the minors). Patience, also, can be a skill learned at the major league level; any opposing scouting report will tell you that Jimenez has low walk totals every year, so it's common knowledge he'd be hacking. Once pitchers discover this, Jimenez will be forced to change his game to being a more patient hitter if he wants to succeed. THIS will raise his OBP--although maybe not to the equivalent of Callaspo (Jimenez would need 54 walks to top Callaspo's projected OBP this season).

It is in MY humble opinion that Luis Jimenez is ready and qualified to be our starting third baseman, whether or not Kaleb Cowart is waiting in the wings. Give Jimenez those two seasons. If he succeeds, cool; we get ourselves the welcome problem of a logjam of young talent, which we can work out when the time comes, plus we get a patient super-utility player in Callaspo. If he falls on his face, fine; we send him back to the minors and/or trade him, put Callaspo back on the field, and wait for Cowart.

Lucho, I think you're ready for the show. Permanently.