The 2013 season opened with inter-league play for the first time ever on Opening Day, as the Halos win in 13 innings.

WTF? We wait 6 months for the season to finally start, and then they take a day off after playing one game?? At least there's some Halolinks to keep you occupied:

Yesterday's game was uplifting to say the least. All we've heard from everyone (including me) was how bad the bullpen was going to be...or how possibly bad they were going to be. I know it was only one game, but if this is any indication of what we have to look forward to, color me happy. The winners and losers of opening day - Yahoo! Sports. "WINNERS: The Angels' bullpen. One of the team's question marks coming into the season, the Halo relievers, six of them, pitched seven innings, giving up only one hit and striking out nine." Here's a rundown of those seven innings: Los Angeles Angels at Cincinnati Reds - April 1, 2013 - MLB.com. "Garrett Richards, the 24-year-old right-hander who forced his way onto the club with a scorching spring, blanked the Reds for 1 2/3 innings and had a key strikeout with the bases loaded. Lefty Sean Burnett, signed to a two-year deal in the offseason, struck out Jay Bruce to keep them loaded in the eighth. Kevin Jepsen, who seemed to find himself after returning from Triple-A last July, struck out two in a 1-2-3 ninth. Scott Downs, one of baseball's best lefty relievers over the last six years, had a clean 10th. Mark Lowe, the power arm the Angels have coveted since November and finally got when he was released by the Dodgers last week, went two innings without allowing a run. And Ernesto Frieri, who was remarkable after coming over from the Padres last May, struck out two in the 13th to notch his first save."

Fun-fact of the day: Angels 3, Reds 1 (13 innings) - Yahoo! Sports. "Kendrick made his seventh straight Opening Day start, passing Bobby Knoop for most consecutive Opening Day starts by an Angels second baseman." He also has won as many batting championships as Knoop.

This article was written BEFORE yesterday's game, and before Richards' fantastic game: Angels likely to make room for Richards in 'pen - angels.com. "It's going to be made available to him," Angels general manager Jerry Dipoto said. "There's going to be times when Garrett's in there in high-leverage situations, and his ability to take more of the opportunity is squarely on him. The way he's throwing the ball now, it's very exciting." Richards forced his way onto the team this spring by posting a 1.45 ERA in 18 2/3 innings, striking out 12 batters and walking two. The 24-year-old right-hander was stretched out earlier and still has plenty of length, but it'll fade quickly as he pitches in one-inning stints."

Forget about that extra weight everyone was worried about, what the hell happened to Mike Trout? 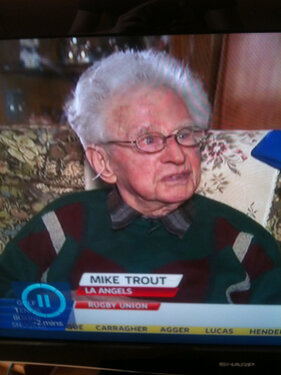 2013 Team Preview: Los Angeles Angels - Beyond the Box Score. "Bold Prediction: The Angels will lead the league in runs scored by a pretty wide margin. Meanwhile, the overall pitching performance will be vastly improved behind strong campaigns by Tommy Hanson, Jason Vargas, and Joe Blanton. Josh Hamilton will produce less WAR than Pujols, Trout and Trumbo. The Angels win the AL West beating up on the Astros all season and pose a threat for a long playoff run. Tempers flair between both LA clubs, and the rivalry is at its peak, setting the stage for a possible freeway series."

And if the above prediction comes true, the Halos will have to face this guy: Clayton Kershaw’s historic opening day: a shutout and a homer - Yahoo! Sports. "He's only the second pitcher since 1921 to hit a home run and a throw a shutout on opening day. The other was Bob Lemon in 1953."

Yankees set record payroll at $230M; Astros $27M - Yahoo! Sports. "At the other end, Houston was last at $27.3 million, down from about $61 million opening day last year and less than the major league-leading $29 million for the Yankees' Alex Rodriguez." How do they afford those salaries? MLB ticket prices see steepest hike since 2009 - ESPN. "Major League Baseball's average ticket price rose 2.7 percent to $27.73 this year for non-premium seats, the steepest rise since a 5 percent hike in 2009, according to the Team Marketing Report." And yet, baseball is still the least expensive: "The average was $78.38 in the NFL last year. It is $61.01 in the NHL this season and $50.99 in the NBA."

Nice move Felix: Felix Hernandez gives John Jaso a Rolex for perfect game - oaklandathletics.com. "Before the former teammates squared off in Oakland on Opening Day, Hernandez sent over a gift for Jaso as a thank-you gesture for last year's perfect game: a Rolex wristwatch that Jaso showed off proudly. "Getting to be a part of it is way bigger than this, but this is definitely a really nice gesture," Jaso said. "He really didn't have to. I was really just happy with being behind the plate. He came through."

Very good article from former MLB pitcher John D'Acquisto: Final Cut-| Instream Sports. "Slider on the outside corner. Called strike three. Inning over. Ott takes the ball and shakes it in his hand right in front of Rickey’s nose. "Is this what you’re lookin’ for, asshole," Ott laughs at Rickey. Hendu and Ott start mouthing face-to-face, then Rickey pushes Ott. Wrong move as the world-class college wrestler Ott body slams Rickey to the ground. Benches pour out. Billy (Martin) had his chance to take me on, but instead he ran straight into the Angels dugout. He wasn’t avoiding the altercation, no, you see, Billy ran after Tom Morgan, the Angels pitching coach. Morgan tried to get away through the tunnel leading to the clubhouse, but Billy caught him half-way and proceeded to beat the crap out of poor Morgan. The Oakland cops pour off the field and down the Angels’ dugout to stop the fight. Billy just loved to fight. Loved it."