The Angels will once again take the field in Cincinnati after already having a day off. Texas Rangers' pitcher Yu Darvish was one out away from perfection.

Hey look! There's an actual, real-life, official Angels game tonight! Imagine that. Angels-Reds Preview - Yahoo! Sports. "After a strong pitching performance earned Los Angeles a win in its first game, C.J. Wilson will try to turn in one of his own in his first career start against the Cincinnati Reds and Mat Latos on Wednesday night." Okay, I'll admit it was fortunate that the club had a day off after the 13-inning Opening Day game, but it is good to see the season finally and truly get underway.

Company line or truth? Revamped Los Angeles Angels of Anaheim bullpen shows early promise - angels.com. "Put that crew last year up against this year's," Dipoto said, "and just on sheer talent and ability and recent track record, yeah, we're in a better position." I'd say truth, but that's not saying much when comparing the pen to last season's.

Monday's game was filled with strange strike calling from the home plate umpire. could it be the framing? Framing the Way You Think About Framing - FanGraphs Baseball. "Think of it, in a way, as pitch-framing splits. Or, consider WAR. If you have two 5-WAR players, they can get there by following different paths. One guy might be a speedy on-base machine. The other guy might be a slugger. Both players are good, but they’re differently good, just as Molina and Lucroy are differently good receiving backstops. Both know what they’re doing, but both have different strengths."

Oh yeah, Yu Darvish pitched a pretty good game last night: Yu Darvish throws near-perfect game - MLB Daily Dish. "Though we're only two games into the 2013 campaign, with 14 strikeouts and just that one hit allowed, this will go down as one of the better pitching performances of the season. Had Darvish held on to the perfect game, it probably could have gone down as an all-time great performance." So Close: Astros end Darvish's perfect game in 9th - Yahoo! Sports. "Washington patted Darvish on the chest and then signaled for a reliever. A crowd of 22,673 that included plenty of Rangers fans cheered Darvish as he walked off after 111 pitches. " That's a lot of pitches this early in the season.

Rosenthal: Yu Darvish gem not the last one the Houston Astros will see this season - FOX Sports. "True, the poor quality of the opponent mostly would have been overlooked if Darvish had succeeded in getting the final out Tuesday night. Matt Cain threw his perfect game against a 107-loss Astros team last season, but most simply remember that he threw a perfect game."

Here's an interesting article about the high cost of cable: Mad About the Cost of TV? Blame Sports - Derek Thompson - The Atlantic. "Your cable bill -- $80 or $90, or whatever it is -- is best understood as two prices. The programming (i.e. the channels you watch) and the distribution (i.e. the infrastructure and profits for the cable companies). Every time you pay a cable bill, the channels collect a small fee. It's called an "affiliate fee." The most in-demand channels tend to negotiate the highest fees. And those tend to be sports channels. Take a look: 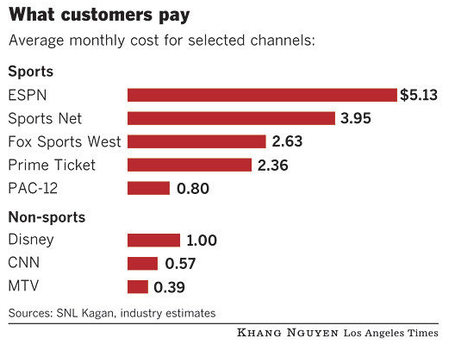 I pay just shy of $150 a month for my cable, but that includes my internet, plus I have all of the premium channels. This will probably change as I notice I don't watch as many movies as I once did, and have started using Netflix and Hulu Plus more often. Oh, and of course MLB.tv : The Killer Feature Of MLB.TV - BuzzFeed. "Audio Overlay! You can now choose to watch the game with the radio announcer instead of the TV!" I like our television announcers, but this is a cool option none-the-less.

It costs more to see the Angels on the road than it does in Anaheim: Everything you ever wanted to know about baseball ticket prices – Quartz. "The first pitches have been thrown, and Rick Ankiel is on pace to hit 162 home runs this season. Time to buy some baseball tickets. To help you out, we've analyzed ticket prices for every regular season Major League Baseball game in 2012, using data from SeatGeek, which tracks prices on secondary markets like StubHub...."

This is funny...if you're not the one getting hit: "Nice Going, Boyfriend!" Perfect Gentleman Runs Away From Home Run Ball, Lets It Hit Female Companion In The Face. "This is why it is perfectly acceptable to bring a glove to a baseball game."