Angels and Dodgers down a mere 5% over the past four seasons. Guess who is tanking the biggest?

Tickets for many interleague rivalry series are down this season, and Angels vs Dodgers tickets is no different. Over the last four years the overall average price for the series has fallen 5% and are down 29% since last season. For Angels tickets to these next two games, the drop is equally significant.

This year prices are $91, a 27% drop compared to last year’s $125 price tag. With prices starting at $25 to get in the door, there are plenty of great deals available to see the Halos take on the Dodgers. You can also see all MLB Tickets here. 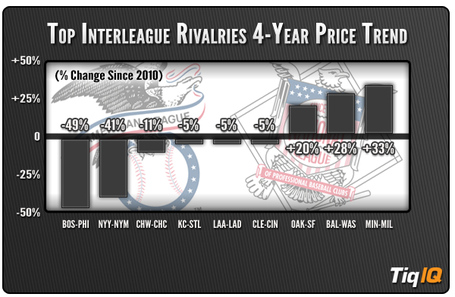 While Minnesota-Milwaukee is booming (maybe there is a sale on beer?) and the Gubmint Beltway O's and Nats games are up too, just like the Frisco World Champs the recent postseason success is the driver here, no doubt. Cleveland and Cincinnati is just like us and the KC/St. Louis rivalry - actually ahead on price if you adjust for inflation but down a whopping five percent.

The Chicago tilt down eleven percent is probably as much economics as it is two terrible teams. The perception that both New York teams are out of it serves to kick the big apple where it hurts and nothing could be finer than the pink hat brigades of Boston and the Philly bandwagon both emptying out.