Angels can't get past the worst team in the American league, and are now 9 games behind division leading Texas Rangers.

The Angels traveled to Houston Tuesday night to play the American League's worst team. When a team expected to have a successful season is playing poorly, getting the chance to face a weaker team can sometimes get things heading in the right direction. That was not the case for the Halos as they drop the first game of their 3-game series to the Astros by the score of 7-6.

The only highlights from tonight's game came off of the bats of Mark Trumbo, Howie Kendrick, and Alberto Callaspo. Trumbo's first inning home run gave the Halos an early 3-0 lead, but starter C.J. Wilson was unable to keep the Astros from scoring in the bottom of the inning. Kendrick's 5th home run of the season brought the Angels to within two runs after catcher Hank Conger's two third inning errors led to 5 Astros runs. Callaspo was able to get the club within a run of tying the game in the 8th, but Astro's closer Jose Veras got the Angels in order in the top of the 9th to end the game.

Conger had a rough night behind the plate when he was charged with three errors, two on back-to-back pitches in the third inning. 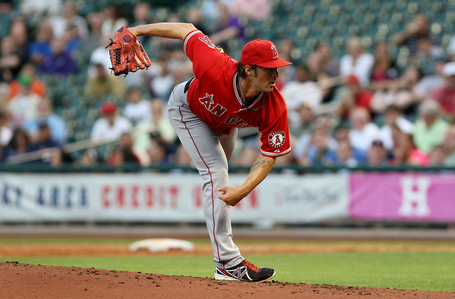 Who's coaching the team?: Why is the Angels' coaching staff not seeing the things that are so obvious to the broadcasting crew? Play-by-play announcer Victor Rojas and color-guy Mark Gubicza were completely baffled by pitcher Mark Lowe's pitch selection to Carlos Corporan. Rojas and Gubicza were questioning why Lowe was throwing off-speed pitches to Corporan when it was obvious he couldn't catchup to Lowe's fastball. Corporan just missed hitting a long home run off a Lowe change-up when his towering shot drifted foul. If two guys whose job doesn't include coaching can see something so obvious, where is the pitching coach? Or manager?