So I was walking around New York City two weeks ago and I pass the famous Chelsea Hotel, subject of many a song and story. They are turning it into condos so I pose for a quick twitter photo rocking my Angels shirt and tell Halos Heaven's 3,000+ twitter followers that the only Angels fan in Manhattan is flying the colors at the Chelsea Hotel.

Who should tweet me back but the actual living breathing biggest Angels fan in Manhattan, Ricardo Marquez, he of MLB Fan Cave fame. Ricardo had his year in the cave and now works for MLB in New York. Ricardo invites me to come watch an Angels game with him and Danny Farris, a cave dweller Angels fan from the OC.

The fan cave is MLB's social media initiative. You can follow Danny on Twitter at @ohshootitsdan and everybody follows Ricardo but in case you need reminding he is the legendary @iblogbetter.

Last month YesWeCan moved to the Big Apple for some executive job and I'm in town for some business and over dinner at Anthony Bourdain's fabulous Les Halles restaurant he agrees to go to the Fan Cave with me. Turns out that the South Greenwich Village location of the Fan Cave is three blocks from YWC's new state-of-the-art bachelor pad. 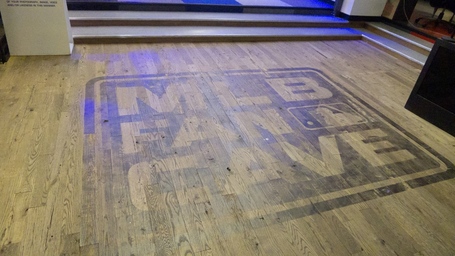 At the entrance to the giant loft-like street-level space is a marquee that lets you know where you are at. 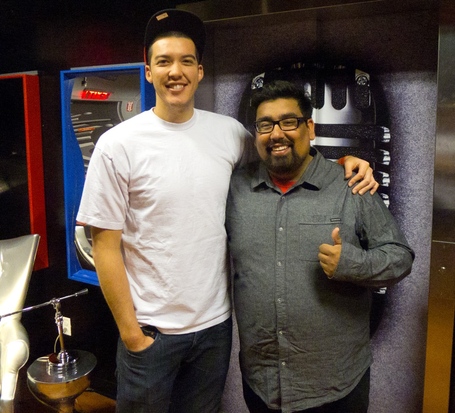 We are greeted by our hosts, current cave dweller Danny Farris (L) and MLB's Ricardo Marquez. 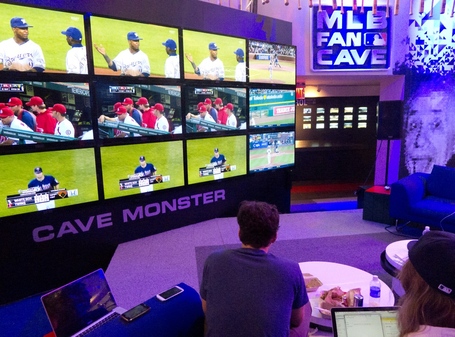 The fan cave's "Cave Monster" is the central feature. Here the Cave Dwellers show up each day to watch every single major league baseball game on this wall of televisions all at the same time. They do this every day for the whole season. They literally never leave the cave while games are on. They live ten minutes away. A shuttle picks them all up and drives them to the cave. When the final out of the final game of the night is made the shuttle takes them back. There are no off days. When the Angels played Oakland into the nineteenth inning, it was past 4:00 AM and the Cave Dwellers were all on their over-sized couch in front of the bank of televisions watching it, and were back on that couch for whatever the first game of the day was the following afternoon.

They get the All Star Break off.

Other than that there is very little time to explore New York City between sleep, every baseball game and more sleep. Oh wait, someone just hit a homerun... 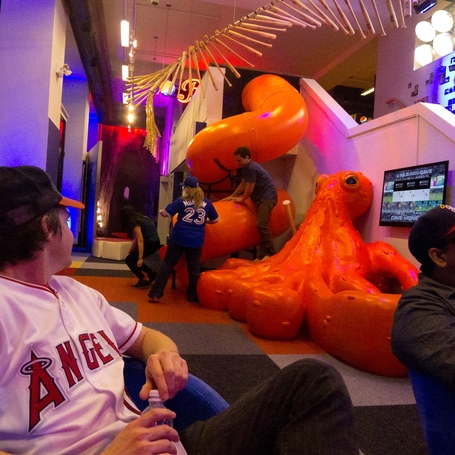 That is one of the cave dwellers sliding down the home run slide. When your team hits a home run you get to slide down the slide. Yeswecan looks on enviously as no Angels had hit a home run on the night we visited. Ha, sound familiar? 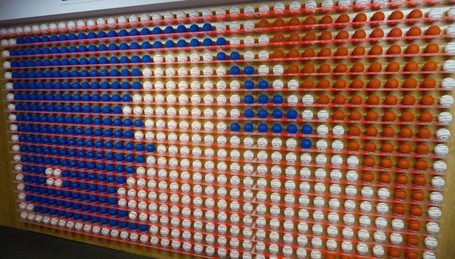 In the cave is this mural created by actual baseballs - it is gigantic. When major leaguers past and present visit the MLB FanCave they autograph a ball - this mural is suddenly getting very historic. 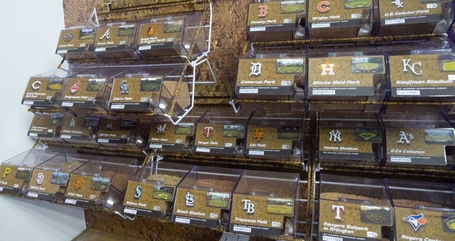 Here is the dirtiest thing I saw in New York City while I was there... dirt from every major league infield. Some of these containers even have chewed up sunflower seeds amidst the clay and gravel. 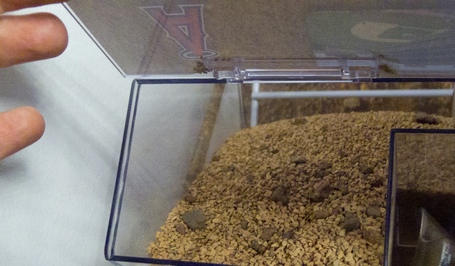 A closeup on the very dirt of Angel Stadium's infield. 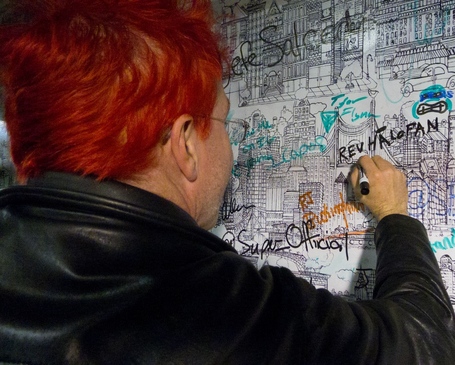 They flatter their guests here with an autograph wall. 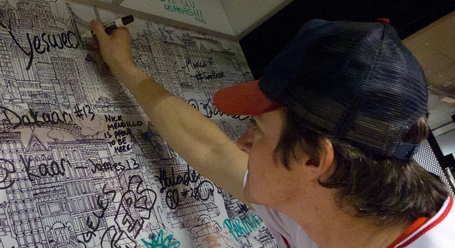 Truth be told it is in the basement. 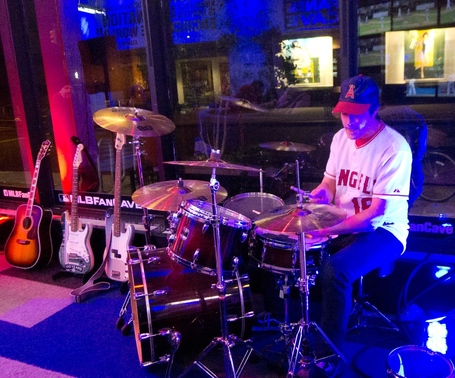 There is a whole set-up here in case Jane's Addiction reunites and decides to visit. In this case YesWeCan did a little tapping until he found out the high-hat cymbal was broken (it was already busted when he sat down). 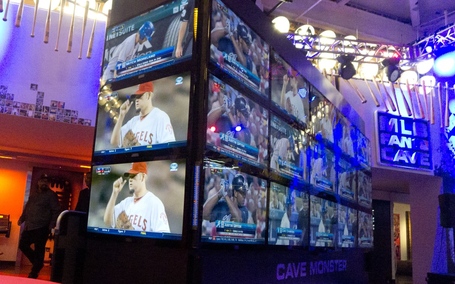 As guests we sat on the edge of the CaveMonster and watched the Angels game on the side view with Ricardo and Danny. The Cave Dwellers watched on the couch. They have a well-stocked fridge with Bud Lite and every Pepsi Co beverage you could ever imagine. I wondered to myself if a Braves fan would die of Coca Cola withdrawals but thought not to ask. New York is the capital of food delivery and the Cave Dwellers knew the phone number of every pizza and Thai food joint below 23rd street.

Here I am posing with the Cave Dwellers - they spend all day every day on that couch. In order left to right there is: The Boston Fan, the Rangers fan, the Reds fan, the Blue Jays fan, Danny the Angels fan, the Mets fan (standing), the White Sox fan, yours truly, The Twins fan and the Dodgers fan.

The Cave Dwellers are extreme baseball fans. Chatting with Ricardo and Danny made the time fly by. Danny played college ball for Pepperdine and Virginia Tech and little in a baseball conversation could be brought up that Ricardo did not have a factoid to add and Danny an analysis of. And of course, YWC and I are blabbermouths so the who evening was repartee central.

We were there the night that Bryce Harper went face first into the outfield wall at Dodger Stadium and had to be helped off the field after he had laid there bleeding. It was like being at a game in that every person there was one hundred percent absorbing the moment and then -BOOM, out came the laptops and the tweeting began, the scanning of social media sites with occasional bursts reciting a relevant or compelling tweet or post somewhere. A chatroom of true fans come to life in the perfect setting. 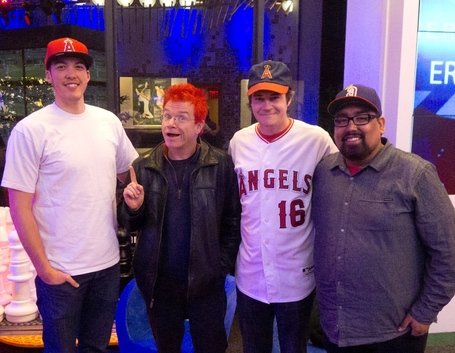 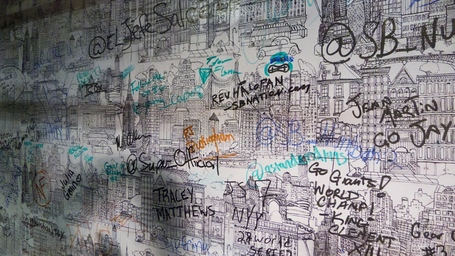