Some baseball cards say it all in one shot...

There is a validation from having the number one superstar in baseball sign with your team. We all felt that way last December when Albert Pujols signed with the Angels. Some of us felt that way when Josh Hamilton was signed during this past offseason.

It felt great in 1982. At the time, Reggie was bigger than any current star. Combine Barry Bonds in his antihero prime minus the 'roids and then throw in the Derek Jeter Championship Caliber celebrity and you might approximate the star status of Reggie in his heyday.

There was no ESPN, not every single game was televised, there were no blogs, you had to buy the paper for a daily writeup and a box score. And yet, absent all of today's media channels one player stood bigger than perhaps any since.

And he played for my team. He signed with US. When I write about the Angels I use words like "us" more than "them" because moments like signing a superstar are like a marriage proposal and walk-off victories are like taking vows together. The news of Reggie's signing was ecstasy. It made you (the fan) and them (the team) US.

And it united me and you, if you were around in 1982 that is. Decades later we still carry a glimmer of that pleasure, that swagger, of having the "straw that stirred the drink" in our lineup. We wanted that with Albert and we got a little taste of it with Trout and senile 'ol Arte thought he could deliver it up with his stupid Hambone signing. You cannot really blame the guy, he knows the money is just going to get donated to some snake-handling church by these players so in reality it is a toss of the billions to charity instead of more Arizona real estate, so he backs up the truck and unloads the greenery in the hopes of creating that ecstatic spark where we all fall in love and it actually redeems us.

Reggie's first baseball card with the Angels was this 1982 Topps card and if a baseball card is art, this one is a subtle masterpiece. Here was the homerun-hitting dynamo identified with pinstripes suddenly rendered human and almost ordinary. Painter Lucian Freud was commissioned to paint Queen Elizabeth and after forcing her to sit for him for hours his portrait was on a canvas smaller than an 8.5x11 piece of paper. He cut her down to size but the final product was not one of disregard but of human intimacy.

The 1982 Jackson has the same humanizing approach. The camera is just below Reggie's eye level and it puts him in an unflattering pose that underscores the daily grind, the blue collar lümpenprole nature of the baseball player. He is holding the bat, wearing the helmet, the tools of the trade, he could be a bricklayer. He is all about his job here, hitting and yet, he is looking at you - and you, him. What is to come? We know David will hit Goliath with a rock. We don't know if the Angels will win the 1982 AL West (they did).

But the genius of the shot was in making the bill of his batting helmet disappear. This is the first picture most baseball fans would see of Reggie out of his Yankees cap and in an Angels uniform. His helmet looks like a World War 1 helmet. The card gives you an intimate glimpse of a man who punches the clock to fight the battle. Every fourteen years there is a three-day window where Saturn's ring is so perfectly aligned with Earth that it looks like a slice through the center of the planet when you look into your telescope. The bill here has disappeared and there is no division between superstar and his new logo and the picture makes that fact magically mundane.

That he was easily as world famous as Queen Elizabeth at the time only makes the simplicity of his portrait more powerful. Reggie standing anywhere is news. Shot on a relaxed Spring Training practice field under blue skies, the center of the universe plays for the Angels now. It is a fact everyone would just have to deal with and Topps told this message to the baseball world masterfully. 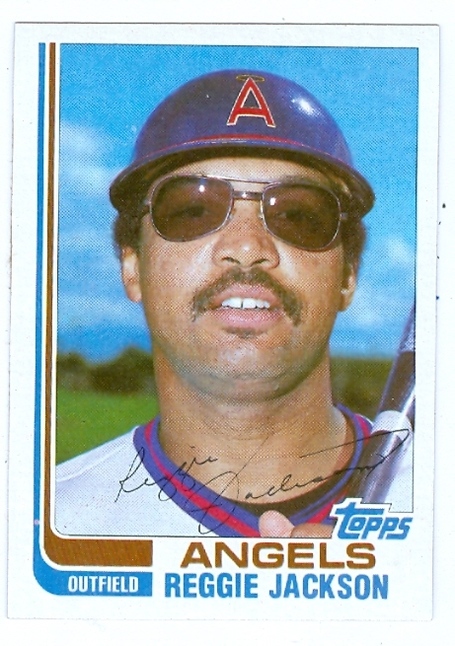 Topps Archives Baseball is a celebration of the 70s, 80s and 90s, what many consider to be the glory years of card collecting. If you collected Topps Baseball Cards during these years then you will love Topps Archives Baseball. Look for autographs and memorabilia cards from today’s stars and your favorite retired players on classic Topps card designs.