Thursday Halolinks: Is Anyone Mad As Hell Besides Me?

Can someone please wake-up this team before they snooze the entire season away.

Share All sharing options for: Thursday Halolinks: Is Anyone Mad As Hell Besides Me?

The above picture has nothing to do with today's Halolinks other than showing the face of someone who is fed up with "things". One of the "things" I'm fed up with (baseball related only) is having to listen to Victor Rojas and Mark Gubicza show more knowledge than the entire Angels' coaching staff. I don't know if it's because I looking for it now, but it seems like at some point during every broadcast either Victor or Gubi will say something about the team's performance that someone on the bench should already have addressed, but for some reason haven't. Yesterday, it was Erick Aybar's last at-bat. Down a run in the 7th, Aybar popped out with the tying run 90-feet away. The problem? He had a 2-0 count and swung at ball three. Could someone please talk to the guy about possibly taking a pitch in that situation?

You know what else I don't get? When there are no outs, why don't more players lay down a bunt against an over shifted infield? During the 6th inning of yesterday's game, Josh Hamilton came to the plate with no outs and Mark Trumbo on first base. The Angels were down by a run, so base runners are needed. Here's what the Cubs' infield looked like: 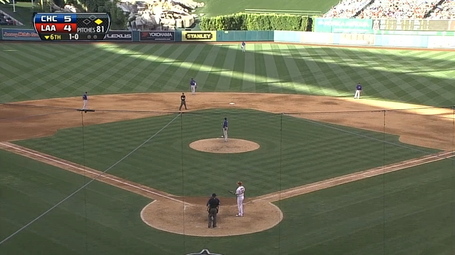 That's the Cubs' third baseman way over there at short. In this situation, why doesn't Hamilton drop a bunt down the third base line, giving the Angels runners on first and second with no outs? I understand Hamilton wasn't signed to bunt, but in this situation, why not? It couldn't be any worse than yesterday's outcome when Hamilton grounded into a double play. I also realize something else to consider is Hamilton's ability to lay down a bunt...he has, once in his career. So maybe he's not any good at it, but someone might suggest he try it out during batting practice to see if he can at least make contact. Or after reading today's Halolinks:

I included this GIF because, besides being somewhat humorous the way the girls kind of says, "you looking for this?", I thought the fat guy at the top was hilarious. Had he backed-off on the nachos, or maybe brought a glove to the game, he might have had a better chance of nabbing the ball. Instead, he does the spoiled-kid fist slam.