From the Angels Media Department...

The Angels return home for a six-game homestand beginning with the St. Louis Cardinals' first-ever visit to the Big A tomorrow night at 7:05 p.m. The seventh home stand of the season concludes Sunday, July 7th after a three-game set against the American League East leading Boston Red Sox (Friday, July 5 - Sunday, July 7). Below is a look at the promotions, giveaways and notable festivities/ceremonies taking place at Angel Stadium during the homestand.

Friday, July 5th, is the eighth Big Bang Friday of the season at Angel Stadium presented by Wells Fargo. At the conclusion of the game, fans will enjoy a patriotic-themed fireworks display.

Live Music in the Garden presented by Budweiser will also continue this homestand with Stone Soul taking the stage from 5:30 - 6:45 p.m. at the Gate One Music Garden.

Upon entrance to the game on Tuesday, July 2nd, fans will receive an Angels Cooler, courtesy of St. Joseph Health.

Brian Schwarze, the grandson of the late Stan Musial, will throw out the ceremonial first pitch on July 2nd before the game against the Cardinals. Musial, one of baseball's greatest hitters and a Hall of Famer with the Cardinals for more than two decades, died last January 19th at the age of 92. In the top of the second inning, the Angels will play a tribute video on the scoreboard honoring ‘Stan the Man'.

Throwing out the ceremonial first pitch on July 3rd will be 2013 AMA 250 East Supercross Champion Wil Hahn. The Wichita, Kan. currently splits time between Decatur, Texas and Orange, Calif. and has experienced successful seasons since turning professional in 2008.

On July 4th, the Angels will be holding special festivities in honor of Independence Day. As part of the pre-game ceremonies, Naval Special Warfare Operator Ronnie Harrison will throw out the ceremonial first pitch. Additionally, the Angels will ask all fans in attendance with military service time and experience to stand and be recognized prior to the game. Other Fourth of July highlights include: Unfurling of a 300-foot U.S. flag on the outfield grass, condor squadron flyover with WWII AT-6 Fighters and the MCTSSA honor guard of Camp Pendleton, Calif. presenting the colors. During the seventh inning stretch, Mandie Pinto will perform God Bless America. At the conclusion of the game, fans are also invited to stay and enjoy a special Fourth of July fireworks display.

Donald Yocum, the son of the late Dr. Lewis Yocum, will throw out the ceremonial first pitch on July 6th before the game against the Red Sox. He will be joined on the field by his mother, Beth, and sister, Laura. Dr. Yocum's talents extended the careers of countless professional athletes, and provided extended quality of life for many others he advised, treated and operated on during his distinguished career, including 36 with the Angels. 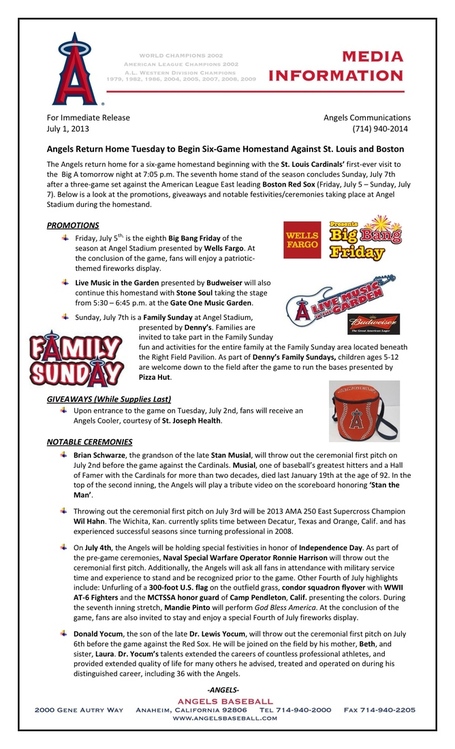