Even with all of the changes, baseball is still the same

I recently bought a used book describing how to play baseball...in 1938. Although the game has changed, its still the same.

Share All sharing options for: Even with all of the changes, baseball is still the same

Of all of the reasons I love baseball, the significance of its history and the deep connection it has with its past is probably the most significant to me. It's intriguing to follow the way the game has evolved through the decades, yet remain basically the same game we watch today. The subtle changes are recorded in photographs and books that note the little "tweaks" to the game, such as the differences in the gloves used, uniforms worn, and even the fields the games are played on.

Since I find history so interesting, looking for and discovering old, historical baseball memorabilia is one of my favorite pastimes. I recently came across a couple of books at an antique mall in my area, and although old baseball books are rather easy to find, for some reason these two caught my attention.

The first book was written in 1938 by Daniel Jessee, and is simply titled "Baseball". 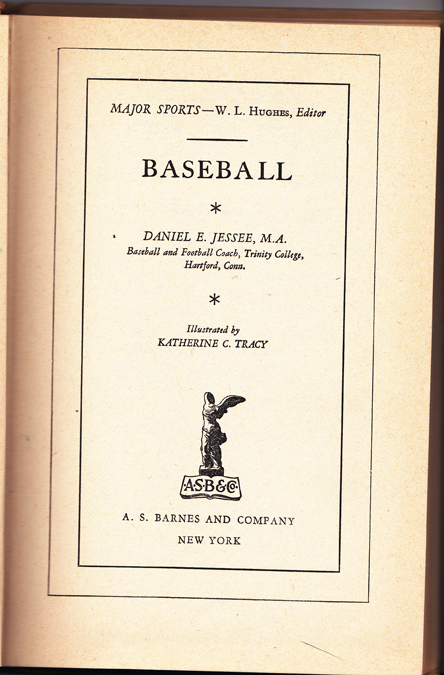 Doing a quick Google search of the author turned up a Baseball-Reference page which noted Dan Jessee was a former professional player who shared a unique career detail with the fictional "Moonlight" Graham character from Field of Dreams; he appeared in just one game, but failed to get an at-bat. On August 14th, 1929, playing for the Cleveland Indians, Jessee entered the game in the bottom of the 8th as a pinch-runner against Lefty Grove and the Philadelphia Athletics. The box score from that game notes Grove pitched a complete game, getting the win in 17 innings - a not so subtle change to today's game. Prior to his lone game in the majors, Jessee played two seasons in the minor leagues, including one with the 1927 Salt Lake City Bees. After leaving professional baseball due to an injury, Jessee went on to become the football and baseball coach for Trinity College in Hartford, CT. From his B-Ref page: 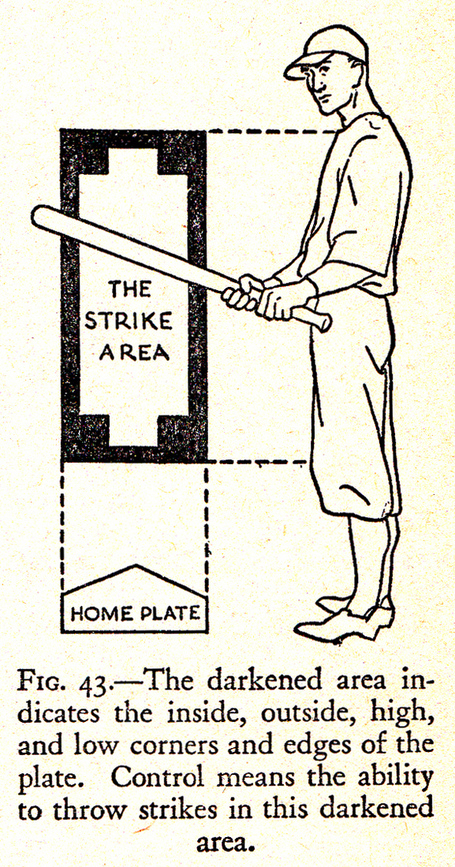 For example, in the section about pitching, the author emphasizes control to improve success, and using control with each of his pitches, a pitcher should throw "across the corner of the plate, knee or waist or shoulder high, and inside or outside." (Figure 43.) The strike zone in the illustration is almost two times the size of today's zone. However, with the huge strike zone in 1938, pitchers were only striking out 3.5 batters per 9 innings, compared to 7.6 strike outs/9IP in 2012. The large strike zone didn't help the pitchers in 1938 in giving up base on balls, as they walked 3.6 hitters/9IP, or roughly .5 batters more than their 2012 counterparts. The strike zone was nearly twice as large, yet the strike out rates was less than half as much. Can you imagine what today's game would be like if pitchers were able to get letter-high pitches called strikes?

Another difference I noticed in one of the illustrations was the pitcher's high leg kick described for pitching out of the stretch (see Fig. 41). If this delivery was truly used by pitchers in 1938, the numbers don't show it allowed more stolen bases when compared to today's game. 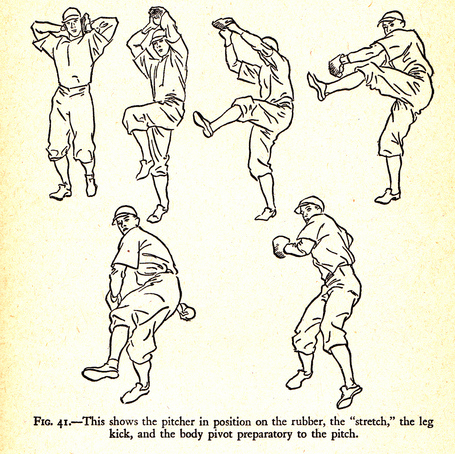 In 1938, runners were successful in 73% of their stolen base attempts, while runners in 2012 were safe 74%. Obviously, there are more factors to be considered, but the high leg kick didn't seem to have much of an effect on stolen bases...at least not in 1938.

One other obvious change from 1938 to today is the equipment used, with the most noticeable change being the size of the gloves. In another illustration from the book (Fig. 53) shows a fielder catching a fly ball with the palms of his hands in front of his face instead of facing away. It almost looks like the outfielders in 1938 used to catch fly balls like they were catching something fragile being dropped from a third story window. 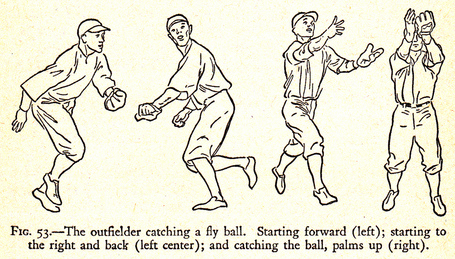 It's fun to look back on the game we follow so closely. We compare the players, analyze the numbers, and look at how much the game has evolved. And yet, with all the changes throughout the years, baseball has stayed relatively the same. The gloves may have gotten bigger, while the strike zone has shrunk, but the game on the field is the same game our grand-fathers and great-grand-fathers loved.