Halos Heaven was invited to attend the 5th annual THROW STRIKES event at the Bowlmor in Anaheim this past Thursday.

Halos Heaven was invited to attend the 5th annual THROW STRIKES event at the Bowlmor in Anaheim this past Thursday. It was hosted by CJ Wilson to benefit CJ Wilson's Children's Charities (CJWCC) and patients of the Hemotology Clinic of Children's Hospital of Orange County (CHOC) and the Hemostatis and Thrombosis Center at Children's Hospital Los Angeles (CHLA).

For pictures and video clips from the event, click here

ANGELSFAN015 and yours truly were invited on behalf of HH by the President of CJWCC, Mr. Robert E. Champagne to take part in the event and share with you the incredible experience we both saw at the event. Members of the media and CJ's Crew were allowed early entry inside Bowlmor (formerly 300 Anaheim) and preview the copious amounts of prizes and items to be raffled off later that evening. 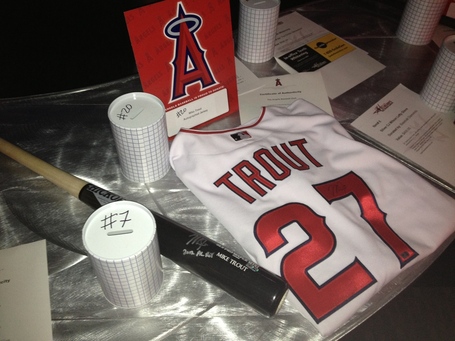 CJ Wilson arrived sometime around 5:30 PM and greeted the volunteers and members of his crew. He was incredibly generous with his time, as he regaled the young crowd with his pitching experiences and even his first major league hit. He admitted that he spent a bit too much time watching his hit split the gap and needed to starting running the bases which was met with laughter from his young fans. At 6:00 PM, the event was now underway as folks immediately lined up to meet their star pitcher. As fans were lining up, we were welcomed by CJ, Mr. Champagne and his son Micah Champagne, the guest of honor and diagnosed with severe hemophilia. 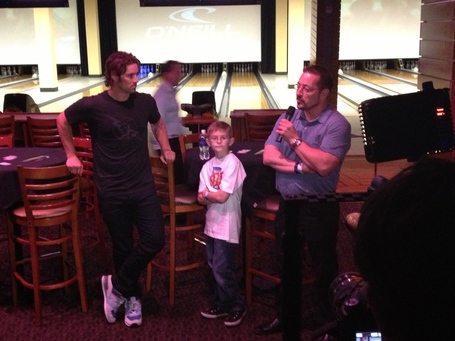 After the welcome greeting, the bowling was underway! Participants were allowed one game to showcase their skills with prizes being awarded for a high score amongst adults and kids. Yours truly was having trouble staying within his mechanics and not trusting movement enough to score a prize (The high score was 223). Cameramen for FOX Sports West, the FSW Girls (Asha, Corinne, and Taylor) and the Angels own Strikeforce were also in attendance to encourage fans to purchase raffle tickets for the drawing later that evening.

After dinner, we were treated to a ten minute video package introducing everyone to Micah and his story and how CJWCC came to be. CJ Wilson first met Micah in 2006 at Cook Children's Hospital in Fort Worth, Texas. Micah was at the hospital that day being treated for a bacterial infection. "His face just lit up when he saw me and the other ballplayers" Wilson said. "I never realized somebody in the hospital could be so positive. He was such a happy kid and I gave him a big hug". According to CJ, he had always wanted to be involved in the community, and meeting Micah that day inspired him to focus on children. "It's amazing what children are capable of, and I want every child to have the full opportunity they deserve".

It's clear that CJ Wilson cares deeply about this cause as I witnessed him sign every item presented and talked to his fans no matter how seemingly endless the line to meet him appeared over the course of several hours. I want to personally thank Mr. Wilson and Mr. Champagne for granting HH the opportunity to interview CJ. Take a moment to check out the video and see what our ace lefty has to say about his charity, his feelings on the alternate red jersey and more!