You will laugh at the pictures in this post but your wife will stare and enjoy it much more.

Share All sharing options for: Angels Haze Rookies with Speedos

Every year, major league baseball teams haze their rookies in late September. This usually happens at the commencement of the final road trip of the season that sees the players walk out of their home yard to the airport shuttle bus. Weird costumes, usually with female overtones that cross over into drag, are left in the players' lockers in place of their normal business casual travel attire. Major League Baseball waives its road dress code. the rookies are humiliated in public, first in front of the home town fans, then all the way to the airport tarmac, and through to hotel check in for that final road series.

So yeah it is a weird ritual, it borders on the kinky, and the logic that a group violates its new member in order to produce solidarity is flimsy logic, but like everything else in jarhead culture, it is a tradition and the vets did it to the rookies who are now the vets and so they are going to do it to the new kids.

This season I noticed a few tweets out their in twitterland that decried a base sexism that forced drag implies - that a man can be mocked by being made to dress as a woman because the implication is that it is less desirable to be a woman, so therefore aha, the PC police caught you in the act of thinking differently form them. Okay I digress, but it was sure timely that the Angels - and it is rumored that Jered Weaver is the ringleader of the annual dress-down - to avod drag all the way with this bright idea... 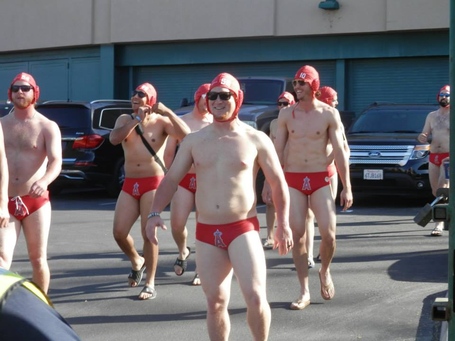 OUR ROOKIES. All Photos here courtesy PATTIMELT. Click to enlarge (the picture not the pinkie)

Rather than the usual $40 rental costumes, someone went to great lengths on today's Angels Rookie Hazing. 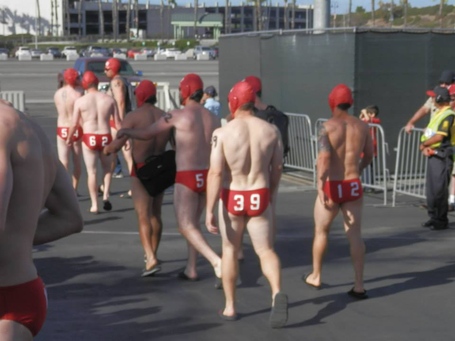 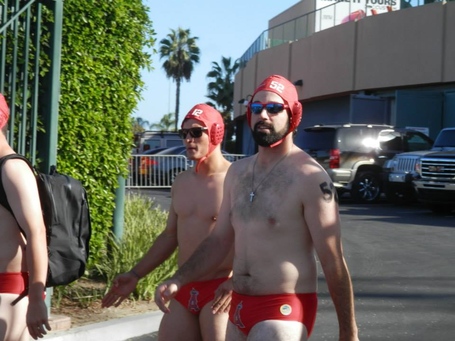 Tommy Field and Matt Shoemaker air it all out.

Add a red swim cap, thongs and sunglasses and that was all the players wore. 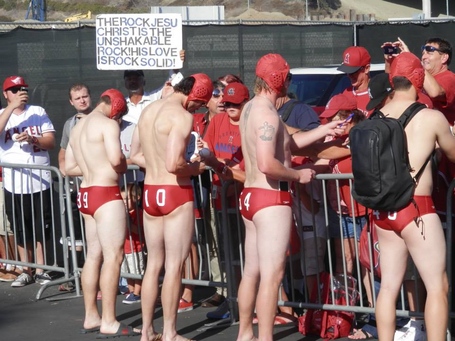 Oh a few got away with backpacks and the occasional smartphone was stuffed into the side but it was a fleshy Wednesday in the Los Angeles Parking Lot of Anaheim. 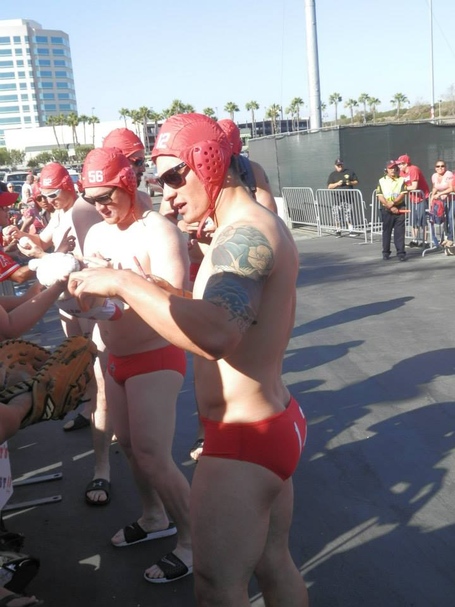 Tommy Field shows off the killer ink that only a draft signing bonus can pay for. Seascape Flowers? 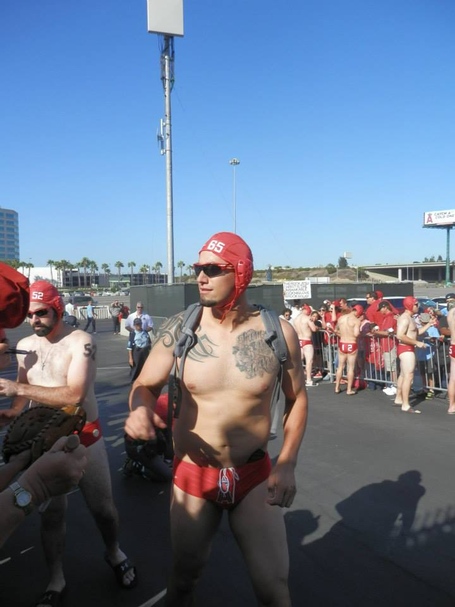 But Dane De La Rosa takes the cake in the "bad ink" category. 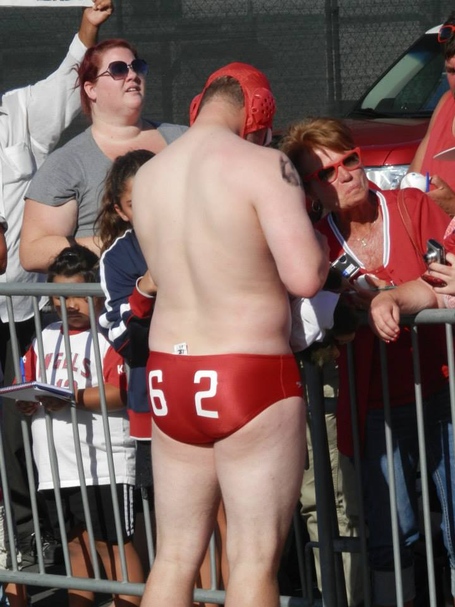 Nobody even had the courtesy to tell Ryan Brasier that his tag was hanging out. 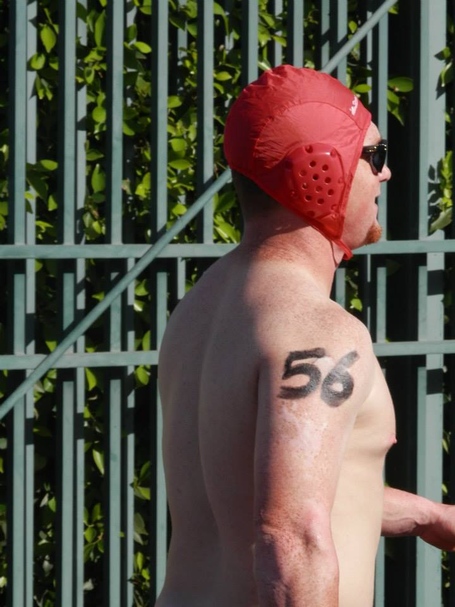 Redhead? Kole Calhoun inadvertently shows off his Red Neck. Get out the sunscreen on this kid! 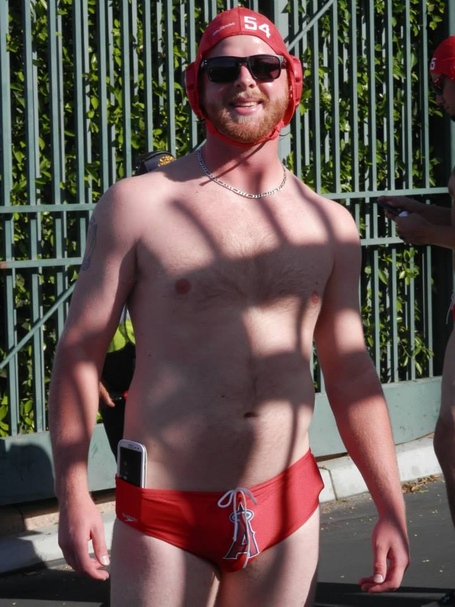 Buddy Boshers looking to force Apple's hand and give him an iPhone. 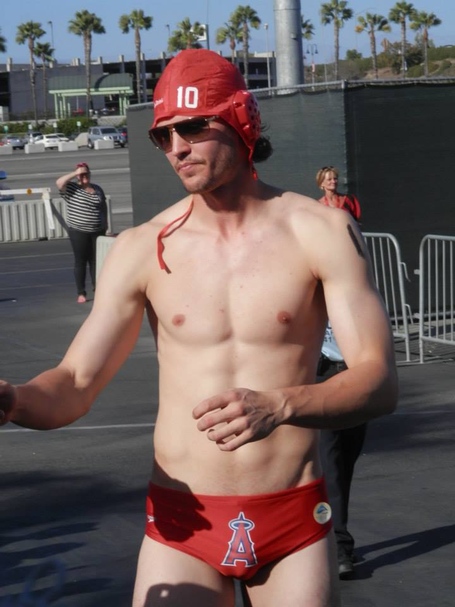 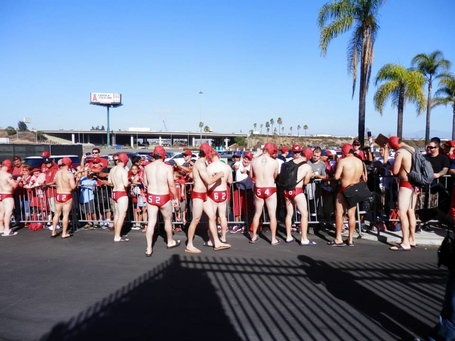 Thanks to PATTIMELT for the photos and for reminding us why Chippendales went out of business.