Angels allow another walk-off win to the Rangers

The Texas Rangers once again beat the Angels with a walk-off home run in Arlington.

Share All sharing options for: Angels allow another walk-off win to the Rangers

Thursday's final under the big top in Texas: Rangers 6, Angels 5

The Angels traveled to Texas to play their final four games of the 2013 season.  The club arrived in Arlington loose and looking to put a huge dent in the Rangers' playoff hopes, as the Rangers were trailing both the Indians and Rays for the two wildcard spots. The Rangers, on the other hand, were tighter than the girdle of a Baptist minister's wife at an all-you-can-eat pancake breakfast.

Yet they once again beat the Angels with a 9th inning, walk-off home run from Jurickson Profar off of Angels reliever Michael Kohn.

The Texas Rangers must have felt like it was the seventh game of the World Series, as they choked their way through a game featuring a franchise-record four errors in one inning.  The Angels took advantage of the Ranger miscues in the second inning, scoring three runs to re-take an early lead.  However, the Angels reverted to their early season ways by forgetting how to get timely hits with runners on base.  The top of the fifth featured three straight Angel base hits followed by a walk, yet the Halos were unable to score a run.  Mark Trumbo lined a single to left, but Howie Kendrick was thrown out at the plate.  Two batters later, Andrew Romine lined out after a Chris Iannetta walk loaded the bases.  J.B. Shuck ended the inning with a line out to first, stranding three runners.  Overall, the Angels left 11 men on base. 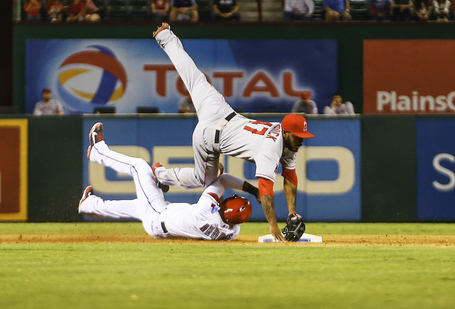 Jerome Williams was in line for the win until his bullpen let him down in the sixth inning.  Williams surrendered just three runs, in spite of giving up 9 hits, while striking out 3 and walking none.  The Halo starter managed to work out of a bases-loaded, no-out jam in the fifth by striking out Alex Rios and then getting a double play featuring a tough turn by second baseman Howie Kendrick to maintain the Angel lead.

The club avoided a scare when Mark Trumbo, standing in the on-deck circle, literally dodged a bullet off the bat of Kole Calhoun.  The ball hit Trumbo on the right side of his neck, causing the Halo first baseman to head into the Angels' dugout.  After a few moments, Trumbo re-emerged to take his at-bat with a large red mark on his neck where the ball had hit him.

For the fourth time this season, the Rangers won the game in the final inning at home.  Angel relievers have given up walk-off home runs to Adrian Beltre (also off Kohn), Leonys Martin, Geovany Soto, and now Profar.  The Angels have one win in seven games in Arlington this season.