Share All sharing options for: Angels Online Marketing: Duplicitous, Sloppy or Both?

Tonight the Angels will induct Halo great Bobby Knoop into the Angels Hall of Fame. Knoop was the 2B keystone of the franchise from most of the 1960s and later served as a coach of the team.

But you wouldn't know it if you get Angels-centric advertising on your social media sites. I have seen the two dumbest advertisements in my life over the past three days on my FaceBook page and, intelligence insulted not to mention fan-dom challenged, this abortion of an advertising campaign must be brought to wider attention. We all know that the paid sportswriters mock fans from the press box, roll their eyes at the working man in the bleachers and maintain a separation of objectivity about the team they cover that inhibits them from feeling things when their team is sloppy in regard to the core followers of the club. Add to this the fact that the compensated/credentialed writers are complicit with the team's marketing as part of their job description and it is up to blogging fans to point out the organization running a bait and switch.

Did you see either of these two advertisements on your FaceBook sidebar this week: 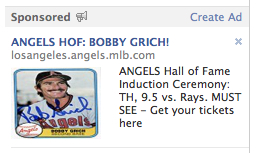 and then there was this one... 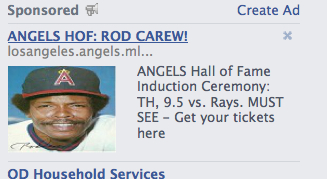 These are direct screen shots and have not been altered from the appearance of the originals on my FaceBook page.

Alright, what is the crime here? There are multiple charges. Consider:

These ads link directly to the Angels website -right to the online ticket counter. So it can be construed that the Angels front office - yes, the same tone-deaf idiots who brought you "Buttercup" (a song about being a loser as the team's in-game theme song) are also half-blind!

These ads look like crap. The simplest photoshop tools are ignored in a slapdash effort to get an image that attracts ticket buyers. And as always, slapdash equals slop-ass. Rod Carew should be embarrassed by the stretched photo placed here, one that could be resolved in 1/10th of a second with the proportions tool on photoshop - don't tell me, let me guess, team President John Carpino needs a new Bentley next year so the offices at Angel Stadium are operating on pirated photo-editing software? Are unpaid interns being hired based on how nice their asses are and then being given tasks to complete that are over their air heads?

Buy me some peanuts from this embarrassingly crackerjack organization, please.

And with all the media rights that MLB hordes from ever releasing into the public domain, the Angels marketing team is reduced to scouring eBay for baseball card pictures? That is what it looks like here, with Bobby Grich and an amateur jpeg-posting. Seriously, there are web-savvy pre-adolescents out there with more photoshop skills in their pinky fingers than Carpino can muster up from his harem-like ticketing staff. And these ads let the kids all know that the Angels ticket office is just as terrible as the Angels front office. Way to build your brand with the next generation, idiot.

The headline of each of these reads "ANGELS HOF:" and then the name of an Angels great. Rod Carew and Bobby Grich are definitely Angels greats, and both of them are in the team's Hall of Fame (Carew is also in Cooperstown, but wearing a Twins cap). There is no mention of the man being honored tonight at the Stadium - Bobby Knoop. None! If the team is that duplicitous in marketing, is there any guarantee that Carew and Grich will be in attendance at tonight's pregame ceremony?

This is how mistrust is built, subtly over time, with promises that go ambiguously stated as the bait and then switched - Since these two are in the team HOF, their terribly reproduced likenesses are used for an event that involves this ...place? What is the Angels Hall of Fame? It is not a room at the stadium, a shrine in the parking lot or even a strip mall storefront in South Fullerton. It was a billboard at the stadium last season - this year there is a big Nike ad in that place. So there is no Angels Hall of Fame like there is no Outdoor Rave. It just shows up once in a while when it is convenient, the weather is nice and the promoter wants to sell tickets.

Now let us examine the text. Ah, the stupidity of a person who has never advertised online is no longer reserved for the occasional senior citizen hosting a yard sale. Read it and weep:

ANGELS Hall of Fame Induction Ceremony: TH, 9.5 vs. Rays. MUST SEE - Get your tickets here.

Talk about brutally half-assed. Again, no mention of Knoop. The date's abbreviation "TH, 9.5" is pathetic. This terrible jumble of letter and numbers signifying something is only there because the team's marketers - being amateurs - saw that they had a character count and, gosh darn it they were gonna use it to tell y'all that the Hall of Fame Induction Ceremony is "MUST SEE". It must be "must see" because it is in all caps. And of course "Get your tickets here" is neither punctuated nor starting every word with a headline-style upper case letter like the lead phrase.

So no matter what you hear tonight at the pregame ceremony, when the Angels tried to get butts in seats to see Bobby Knoop honored, they were disrespectful to the man in what appears to be either duplicity, sloppiness or both.

And the carefully-crafted Angels brand shows even more weathered cracks as chasms form near its foundation. And in cheapened desperation, this is what we fans get. Duplicitous slop as our reward for "liking" our team on social media. Let the unfriending begin...