Brought to you from Sunny Southern California...

To start on the upside of what is important, i.e., the actual team that will be on the field in 2014, Mike DiGiovanna tweets:

#Angels LHP Sean Burnett, who missed most of 2013 b/c of elbow injury, began throwing program this week. Could play key role in bullpen.

This could be the hugest deal of them all. Remember folks, Prince Fielder and Robinson Cano need to be dealt with severely, not with lots of hope but with lots of hitting the inside corner where their fat wrists cannot do damage.

In other news about the players, the Angels signed Justin Thomas to a Minor League deal. He's expected to start in AAA, he is 27 and played in Japan and Oakland's Triple-A team last year. Also they re-signed pitcher Jarrett Grube.

Off the field, Kole Calhoun had Chinese food for dinner the other night. So what? He got the worst fortune (besides saying "You have been traded to the Marlins") imaginable: CLICK THIS LINK to see it. What is the worst fortune cookie fortune you ever got?

This one is sad: Building a whole team with players who never won a world series, a Cy Young, an MVP nor made the Hall of Fame - what is the best team you can come up with? CLICK THIS LINK - there are a few Angels there.

Mike Trout was on the field... pregame for the Philadelphia Eagles playoff game (they lost at home to the Saints, imagine that, an Angel rooting against the Saints). Anyway, his lawyer, I mean his BROTHER, Tyler Trout, instagrammed a cool pic of them and their dates CLICK THIS LINK.

The Monkey With A Halo blog has started their Top 30 Angels Prospects Countdown with Brian Moran, who the Angels got on a rule 5 deal from the Mariners via the Blue Jays. CLICK THIS LINK to read all about the guy.

Oh and Angels pitcher Matt Shoemaker tweeted that he loves Michigan with this photo: 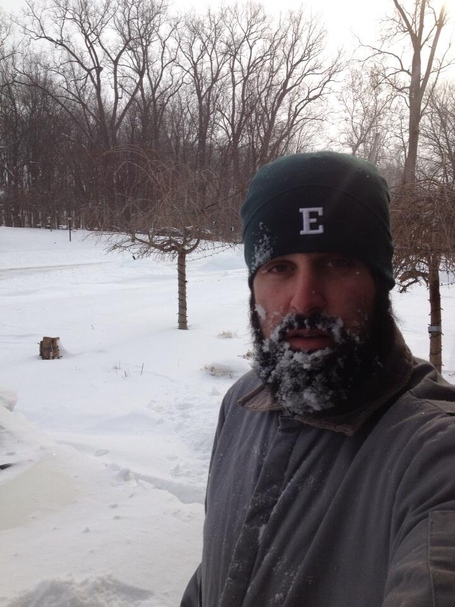 Jim is thawing out of a deep freeze out in the midwest as well and should be back with his regular links tomorrow!