Mojo is real, and powerful. But it's also dangerous if used by the uninformed and uninitiated, so I'm here to help you get started on the road to successfully creating and sustaining mojo for the upcoming World Series run.

Share All sharing options for: Mayhem's Guide To Postseason Mojo

It’s that time of year again, when baseball’s 162 game grind has come to an end, signaling the true end of summer, and along with it, our (second favorite) national pastime. For a select few teams, however, the end of the regular season is merely the jump off point into a world of the most intense, atmospherically charged games these professionals will ever play in their lives. Only the best of the best remain; each game is a crucible, and each at-bat becomes the crux of a life of glory, or a life as an also-ran. This is postseason MLB baseball. Each October, fans of the remaining teams pore over potential match-ups, current player injuries and ailments, weather reports and expanded rosters. Each season we look at the strengths and weaknesses of playoff contenders and expound on these virtues in hopes to figure out what it will take for our favorite team to hoist that World Series trophy. Some say timely hitting and good defense; others may point towards starting pitching and rock solid bullpen. Sure, those are great things for a team to have, but none of those things win championships. What wins championships, and in this case, what will specifically win our beloved Angels a championship, is MOJO. That’s right; pure, unadulterated superstition and fans’ strict, unwavering adherence to these superstitions and rituals is what will give our boys a ring and the city of a victory parade. Make no mistake about it: YOU, the fan, hold the team’s fate in your hands. In this guide, I will give some pointers and tutorials on these rituals, as well as a little background into my personal expertise. 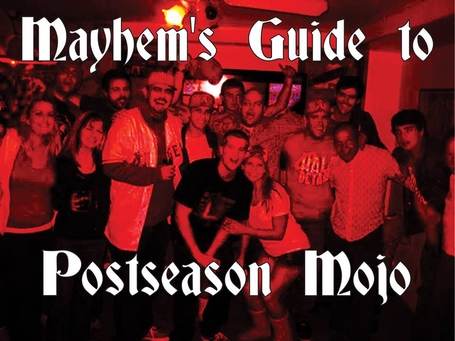 "There is a fifth dimension, beyond that which is known to man. It is a dimension as vast as space and as timeless as infinity. It is the middle ground between light and shadow, between science and superstition."-Rod Serling

"Superstition is foolish, childish, primitive and irrational - but how much does it cost you to knock on wood?"-Judith Viorst

In October of 2002, the surging Anaheim (RIP)Angels provided their fans with something that hadn’t happened in quite some time: a playoff series featuring their favorite team. It had been a long road without tasting any of that Red October glory and hysteria, and it had been even longer (read: never) since they turned a playoff series appearance into anything more than a one and done. But this was a young, exciting group of ballplayers, hellbent on using that newfangled Wild Card spot to do some damage. The stage was set. Meanwhile, 22 year old Mayhem was waking up in a ditch-….actually, forget that part. Let me fast forward to Tuesday, October 1, 2002, when I sauntered on over to the Hurley household, situated in , . I had been friends with the Hurleys for years, and going over there to hang out and knock back some cold ones was not at all uncommon. But this time I headed over there to convene in their living, and see what those Angels could do in the post-season. It all started so innocently. The Angels faced off against the always-hated (by decent folk, at least) Yankees, and in Game 1, ended up losing a back and forth battle. Then, in Game 2, the Angels came roaring back and it was in the eighth inning of that game that things got weird. 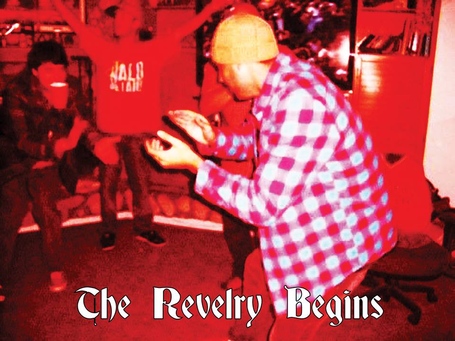 The word had gotten out amongst our circle of friends that the Hurley house was a fun place to watch the games, and to hang out in general. So as Game 2 came  around, there was the same core of people from Game 1, but also a few new friends and family members, as well. In a close one against the Yankees, it was the 8th inning and things were getting desperate. I don’t know who started it or how it started, but eventually someone picked up a barbell (that had RED weights on it) that had been left on the living room floor by one of the men of the house, and began to do curls while facing the television. I felt something at that moment, but was unsure what it was. Looking back, it’s easy to tell what that feeling was: it was mojo. The Angels won that game, and thus began the act of Offensive Curls. The playoffs kept going and the Angels kept winning. More people began to come over to watch the games, and the mantle above the fire place, situated near the television in the living room, began to get filled with random Angels bric-a-brac and good luck charms. We all began to be acutely aware of our outfits we wore during previous victories, and made sure to keep wearing them. We began giving rocks, or daps, to each and every person in the room any time the Angels did something good. If the team needed defense, we had people doing either push ups or chugging beers. In one, game during the ALCS against the Twins, the Angels were down and our buddy Jeff went to the backyard to shoot hoops. The Angels would rally to win that game, and Jeff would then go on to shoot hoops in the backyard during tight spots in subsequent games. There was electricity in the air, I tell you. From , we could see the Big A during every game and as the stadium did it’s best to aurally terrorize opposing teams with Thundersticks, we looked out upon the stadium and sent our own crazy, partially-psychotic brand of mojo their way. It was working. You’re most likely as fervent an Angel fan as we were, so it goes without saying how that glorious 2002 October post-season push ended. A tradition was forged out of those cold (68 degrees) October nights, where friends and family went all in on acting like complete loons, all in the name of MOJO.

Generating good mojo isn’t easy, though. It takes dedication, determination, willful disregard for rational thought and, in some cases, lots of booze. It takes planning and guile; a sense of duty and a keeping to a strict, albeit bugnuts insane, regimen. Things will not always be rosy, and sometimes it may seem that the mojo isn’t generating quite the amount of fluid karma that you’d intended. Things can go south rather quickly, too, in the case of a loss. In 2008, we once had a friend come over to the Hurley House of Halo, wearing a Dodgers hat, and things intensified quickly. I won’t name any names, but perhaps a fight almost ensued outside, and maybe someones car got keyed, and maybe in retaliation for that, someone went to another person’s house, broke in and trashed the place. Like I said: this can escalate, and quickly. Welcome to playoff baseball. Cooler heads always prevail though, and I’m here to help you create your own mojo for the Angels upcoming playoff series. I’ll give out a fit helpful hints and tricks that will not only make the Angels FOR SURE win, but will also make you feel slightly embarrassed as a heretofore sane adult.

Postseason superstition and ritual can sound daunting, but in the end, the hard work and  the act of continually making yourself look stupid (at least out of this context) will undoubtedly pay off. Will it pay off with the Angels winning the World Series? Well, in a word: YES, if you’ve done everything correctly. If the Angels lose in the ALDS, ALCS or World Series, it’s most likely going to be the fault of a handful of fans who couldn’t muster up a single item for their altar, or petered out at 2 offensive curls. "But you said it’d undoubtedly pay off, Mayhem?" Well, it’s true, and here’s why: at the most, you become the Angels’ lightning rod which drives them to a second franchise title. But, at the very least, you have some hilarious, weird, memorable moments with a bunch of people you love and can look forward to repeating over the years. The genesis of the Hurley House of Halo, and all these crazy customs and practices, is now over 10 years old, and we’ve all gotten older and busier. I don’t get to see any of those people nearly as much as I used to, but such is life. That said, when the Angels get into the playoffs, nothing needs to be said to any of us, as we all just instinctively know to show up at game time, ready to dip our toes into those hysterical, frenzied October waters. And just like that, we’re around friends and loved ones again, as if no time has past, and I can’t think of a better way on this Earth than to spend my time. 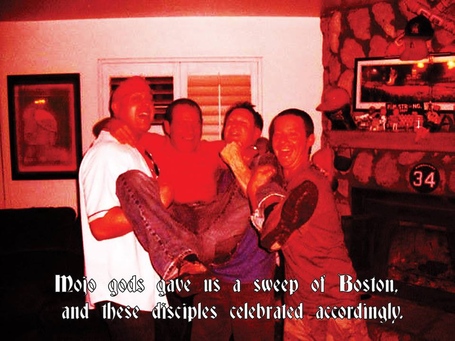 If you have any tips or tricks you’d like to share, or insane superstitions, stories, rituals and habits…please, let’s hear about them in the comments!