MondoLinks: A recap of baseball happenings over this past weekend...and One Big Idea to ponder yonder down the thread.

Welcome to Monday mornings, sports fans! Beginning today, Halos Heavens launches a regular links and discussion thread for every Monday, hosted by yours truly. It's all part of my new assignment here on the board. I might have warned you all this past Friday, but Mondays are reserved for bad news, so here we are.

In this space I hope to do three things consistently:

1) Recap the goings on around baseball and with our Angels since Friday morning. During ST, this won't be too much, but once the season starts, it will be a decent place to regroup on the most recent three games. And if anything important happens elsewhere, hopefully I will catch it. But this will most definitely not be a linkage smorgasbord such as you endure on Fridays. I will try to be more focused and succinct.

2) One Big Idea to be bantered about. Baseball-related. Mostly Angels-specific. But something to provoke you to volunteer an opinion and let others help you think it through.

3) The answers to Saturday's Change Of Art puzzle. Just because that works for me.


So...glad to be here. Hope we all have some fun. But let me know if you want to see something else on Mondays that I might not be thinking about. This is our joint and I am flexible. Thanks and welcome!

Ok. That is out of the way. Let's get started:

Not one player listed in the top career home leaders in baseball history are also among the top career stolen base leaders. Different skills, different physical attributes, different philosophies concerning value to the team.
I have accumulated the data off of Baseball Reference concerning these leaders and am going to present a visual look at this information. And, when I do, I am going to inject what our young Mike trout has done thus far in his career. And the reason I am going to do this is to pose this question to you: based on what you know about Trout to date, what kind of career player do you forecast him to be? Do you forecast him to end up being known as a power hitting home run leader with great speed and great base-running skills? Or do you forecast him to end up being known as a great hitter with great base-running skills, who also had above average power his entire career? (And, yes, I do know how early it still is and how many things can potentially go sideways...but humor me, this isn't FanGraphs.)
Along the way, you are going to see some interesting things in the charts because I am going to point them out. So follow along, this is going to be interesting.
To begin with, plotting home run leaders presented a challenge due to the impact of PEDs. Oh, sure, we all "know" that PEDs does not have an impact on one's eye-hand coordination. And, sure, we all "know" that the real cause of home run production to jump was a byproduct of overall offense during those years. Yeah, yeah, yeah. Well, if that is your particular opinion, hang in there for a moment and look at things my way. You may just have a harder time pushing that particular tale through the needle's eye this time.
Anyway, what I did was to segregate out the traditional list of career home run kings from the modern list of suspected PEDS users on that same list. the PEDS list is a lot smaller, but still contains a lot of counting results. Let's start with those two groups. The PEDS group is Bonds, ARod, Sosa, Thome, McGwire, Palmiero, Manny, and Canseco. Thome is a rather controversial add, but is here because of the ballooning numbers in teh same period as those of Bonds. If I am going to fail, I am going to fail on the side of overtly convenient coincidence. The non-PEDS group is Aaron, Ruth, Mays, Griffey Jr., Frank Robinson, Killebrew, Jackson, Schmidt, mantle, Foxx, McCovery, Frank Thomas, Ted Williams, Ernie Banks, Eddie Mathews, Ott, Sheffield, Eddie Murray, Gehrig, mcGriff, Musial, Stargell, Delgado and Winfield. Let,s begin.
Here is a look at the performance arcs of the non-Steroids players, year-by-year, presented in terms of calendar age:

Above you are looking at the career home run production arc of the non-steroids leaders. The thick green line in the middle is the average number of home runs hit in each season, of all the leaders' production combined, year-by-year, according to the common age of each player. The top dotted line is the highest number of home runs hit by any of those players at that age. The lower dotted line is the least. I did not do the mean since that serves me no purpose here. that blue line? That is young Master Trout to date. As you can see, his launch each year has put him near the very top of any of the best individual achievements of any of the others.

The interesting observation to make here is the production arc of the greats. Note the rapid rise up to the body age of 27, the peak production years through the age of about 32 (observe the minimum line), and then the gradual tapering off as age grabs hold of said bodies.
Trout, as a home run producer, has the chance to establish himself in the upper echelons of our Major League Baseball Pantheon. Above average, among the well above average.


For comparison sake, let's do that same thing with the steroids group:

The same characteristics of the graph hold true here but, except for the Trout Line, the colors have been changed to red. The numbers of players are fewer, so the grand total of data points are less and the chances for variation are greatly increased. But the trend is notably different than that of the first graph. I will merge these two in the next graph. Pay less attention to the Trout Line here because it is compared to the early years, generally before the onslaught of the steroid era.


So now that we have gathered this information, let's do the merge: 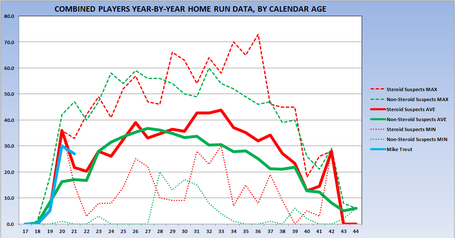 The green lines still belong to the non-steroids, the red lines still belong to the steroids, and the bl is still the Trout Line. The observation here is less about Trout than about PEDs. Notice the deltas on the lines of similar values between the two groups as age draws down the skill levels. For the PEDs group the high-water mark does not gradually descend but actually increases year over year until it falls off a precipice. And the average, though still succumbing to age, proves extraordinarily more productive. For the record, most of the peaks in the early ages through age 27 are ARod, from ages 29 through 32 Sosa dominates, from 33 through 35 it McGwire, and from 36 on out it's almost exclusively Bonds. It's generally written that Bonds began juicing around the age of 34, with it kicking in starting at the age of 35. But then, information like this cannot be indicative of anything if PEDs have no real impact, right?
Anyway, back to Trout. Yes, overall, regardless of group, Trout is poised to establish himself at the upper levels of the historical elite if he keeps on producing at this rate for his age.


Now, before we get off the power productivity, I figured that maybe there is something to be gleaned from this information in terms of years of service, or experience, rather than by mere age? So let's go through these comparisons again, but by service years. Here are the non-PEDs:

The curve is a little flatter and more elongated, but still familiar. The rust of time takes an inevitable toll. And still, the Trout Line remains superior.


Looking at the PEDs group we see a radical shift:

Something is amiss, yes?


Let's merge them, as before: 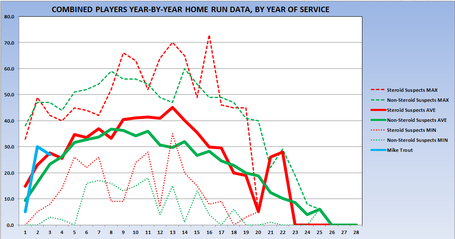 The PEDs group starts out, on average, tracking just fine along with the non-PEDs group on relative experience. But something more than experience kicks in and overwhelms the aging process there for a while, doesn't it?


Ok, we can summarize our power exploration by saying that Mike Trout, in terms of both age and experience, has skyrocketed to the top of the Class of baseball history, regardless of whether we are talking about those juiced or those not juiced. Trout has a chance to abuse the power numbers of those who could only hope to track with him or ahead of him via artificial means, and potentially end up deep among the Top 10 of those in the inner circle of The Hall. Mike Trout could well become a power monster.


On the other hand...what about speed and base running? Could, instead, Mike have a commendable career in that direction? Here we can ignore PEDs versus non-PEDs and just see how Trout fares against the career base-stealing superstars of history. My list of the top carer SB leaders reads right off the top 20 as seen here. 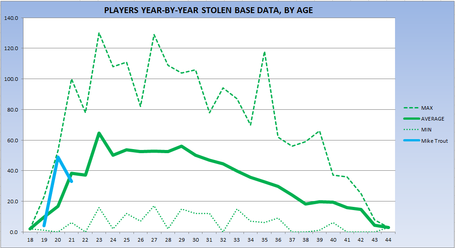 Bingo! These names reach all the way back well into the 1800's. And Trout is crushing it. Also, this is considering that there are outside influences on Trout's ability to snatch bases. Namely his manager.


And, again, by experience (years of service?) 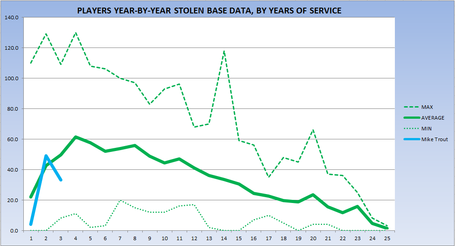 Although Trout is not crushing the speed monsters of history, he IS running right on the average of the very best of all time. We already know that Trout has batting average, and he is a monster on the basepaths right there along with the elite.


Alright. Now that we have all that laid out for you, we now can see that Mike Trout is tracking at historic levels as a power prospect. And we can see that he is also tracking at historic levels as a speedster. The subject for discussion is clear. Nobody has ever had a career among BOTH elite groups. Mike Trout won't, either, But he very well could end up high on one of those lists. If you had to pick today, knowing what you know and seeing what you have seen, which group is your guess, and why?